A chaotic political standoff with international diplomatic implications began unfolding quietly weeks ago on a leafy side street in the upscale Georgetown neighborhood of Washington, as a group of American activists moved into the five-story Venezuelan Embassy and made themselves at home.

They were there, they said, to keep the United States from going to war.

With some 100 Venezuelan diplomats still working inside during the day, the activists from Code Pink and other antiwar groups brought their things to spend the night, sleeping on couches to keep the building occupied around the clock. They said they were guests, invited by the government of President Nicolás Maduro, and their mission was to oppose any American military intervention in the troubled South American nation.

Appointees of Juan Guaidó, the opposition leader recognized by the United States and some 50 other countries as Venezuela’s interim president, had pledged to take over the embassy, a move those now occupying the facility fear could lead to a reciprocal siege of the American Embassy in Venezuela, and an armed conflict.

Late last month, local Venezuelans who support Mr. Guaidó learned of the occupation and descended on the building, demanding that the activists, whom they view as unlawful trespassers, get out.

In the ensuing days, tense clashes between the occupiers and the Venezuelans, who are camped in tents surrounding the building, have escalated, prompting nine arrests by the Secret Service. Late on Wednesday, the power company shut off electricity to the embassy, thrusting its occupants into darkness. The protesters outside cheered.

The extraordinary stalemate has challenged local authorities and the Trump administration, turning the inoperative embassy into a stand-in for the much larger crisis vexing Venezuela, as Mr. Maduro’s supporters maintain control in spite of efforts by the opposition and the United States. 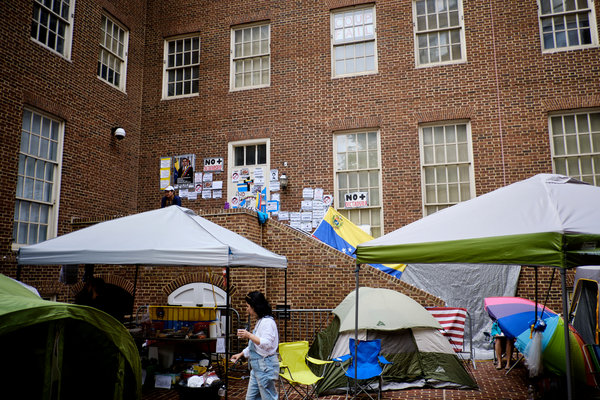 “We are in a lawless kind of situation,” said Medea Benjamin, a co-founder of Code Pink.

The antiwar activists have been alone in the embassy building since late April, when the American visas for the shoestring embassy staff expired, forcing the diplomats to go home.

Ms. Benjamin said she is trying to preserve the peace until a neutral third party, such as the government of Switzerland, takes over the embassy. Mr. Guaidó’s supporters insist they are not making a case for American military intervention in Venezuela, but only want the Americans to leave a building that does not belong to them.

“I do not support U.S. intervention, which is why I’m even more upset about the situation,” said Dilianna Bustillos, 30, a senior manager at Oracle who has been outside the embassy for eight days. “I think it’s hypocritical for an American group of people to be against intervention and then be in our embassy squatting.”

The occupiers have filled windows in the upper floors with block-letter posters spelling out “COUP FAIL.” Washington police and the Secret Service have set up a barrier separating the pro-Guaidó camp from Maduro sympathizers and other activists across the street.

The former ambassador is long gone, recalled months ago by Mr. Maduro. Even before the rest of the diplomats left, the embassy had stopped providing services like passport renewals. Carlos Vecchio, the ambassador named by Mr. Guaidó and recognized by the White House, has showed up at the embassy steps twice in the past week, but has not been let in.

Francisco Márquez, Mr. Vecchio’s political adviser, said that once the United States recognized Mr. Guaidó as Venezuela’s constitutional leader, those inside the embassy lost their legitimacy as guests of Mr. Maduro. The State Department has also said it considers their presence to be “unauthorized.”

“There’s no doubt of who has authority over the embassy,” Mr. Márquez said. “We literally have foreigners trespassing on Venezuelan territory. They’re actually committing a crime.”

No one has gone in to forcibly remove anyone. Ms. Benjamin said doing so would violate an international treaty that protects the sovereignty of diplomatic missions. Mr. Márquez said the treaty applies to the recognized government in question — that is, Mr. Guaidó’s — and would not protect Code Pink and the other groups.

When Pepco, the power utility, sent an employee to go into a manhole on Wednesday night and cut the building’s electricity, Ms. Benjamin questioned whether Pepco had faced political pressure from the Trump administration. She said the electrical bill has been paid through the end of May.

Mr. Márquez said Pepco acted after Mr. Vecchio reached out to the utility and explained the situation. Ben Armstrong, a Pepco spokesman, declined to comment, “out of respect for customer privacy and public safety.”

At the peak of the embassy occupation, some 50 people were inside, sleeping on the floor, sharing cooking duties and engaging in art and music activities. But only about 15 people remain in the building, Ms. Benjamin said. The others have been unable to return ever since protesters arrived and effectively blockaded most entrances.

Two activists have been arrested in recent days for trying to deliver food. One tossed bread and lettuce onto the embassy patio, Ms. Benjamin said. Another tried to toss a cucumber. An attempt to bring in food via a window rope-and-pulley contraption proved unsuccessful.

“They’re not hostages — they can come outside and eat,” said Gabriela Febres, a Venezuelan who has been at the site for 10 days. “They can protest, but so can we, and that’s what we’re doing. They can protest all they want, but not inside the building. They can go to the Capitol and express their dislike with Trump at the Capitol with their senators.”

On Thursday, Ms. Benjamin scheduled a news conference to denounce the cutoff of electricity. But those gathered outside the embassy blared a loud horn and banged empty pots and pans, making it nearly impossible for her to speak. Later in the afternoon, at least 30 people were scattered outside; that number typically swells to more than twice that in the evening and on weekends when people are off work. Speakers on a sound booth out front periodically play music.

Mr. Guaidó’s supporters have covered a wall with pictures of prominent anti-Maduro activists, including several whose deaths they blame on the government. A handwritten poster out back laid out, in Spanish, a code of conduct urging people to respect the embassy site and “be assertive, not offensive.” Ms. Benjamin accused those assembled outside of shoving her and making sexist and racist comments; the Venezuelans said one of the activists shoved a pregnant woman.

“We’re not trying to hurt anyone by doing what we’re doing,” said Ms. Bustillos, who is now preparing to enter her ninth day outside the embassy. “We’re just asking them to please come out.”