Home » Americas » Warning Shot for California: A Los Angeles Wildfire in May

An encroaching wildfire that forced the evacuation of hundreds of people on the outskirts of Los Angeles over the weekend is being called a warning that California could face an unusually early fire season this summer as a severe drought takes hold.

There were no deaths reported or homes destroyed in the brush fire, which blazed through steep terrain near Pacific Palisades, in western Los Angeles. But its fast-paced spread despite cool temperatures, relatively high humidity and cloud cover was seen as a measure of how desiccated the landscape has become — and how the drought has primed many parts of the state to burn.

“We normally don’t have this type of fire, this size of fire, in May,” Ralph M. Terrazas, chief of the Los Angeles Fire Department, told reporters at a briefing on Monday. “I think we really have to think about brush fires as a year-round challenge.” 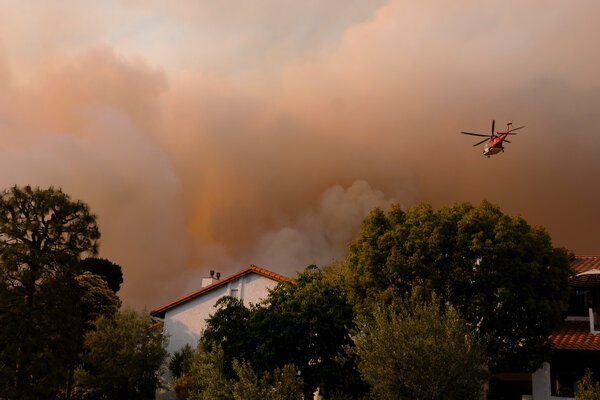 The authorities said the origin of the fire was suspicious, and on Sunday they arrested a man they believed had ignited it. The Palisades fire has grown to 1,325 acres since it was first spotted on Friday and remained uncontained on Monday afternoon. A mandatory evacuation order covered about 500 homes and affected about 1,000 people.

Maegnan Yu, a resident of Palisades Highlands, an upscale community with mountain views that is accessible only by a winding road through steep canyons, scrambled on Saturday to accomplish a ritual far too familiar in California.

She gathered her passport, medicine, jewelry and photo albums and packed her car, ready to evacuate. From her balcony she could see three places where the hills were on fire.

Firefighting helicopters have been flying over the Mediterranean-style homes of her community since Friday night, filling up with water in a nearby reservoir.

“Every time the summer comes you think, ‘Maybe this will be the one,’” Ms. Yu said on Monday. “This one is really in our backyard.”

Most fires are caused by humans — by power lines falling, by sparking mufflers dragging on the pavement and by gardening equipment, for example — although few are intentionally started.

In past decades, California’s fire season reached its peak in late summer and fall, further propelled by strong winds that arrive in October and November. But recent studies have shown that the season is now extending earlier into spring and later into winter.

Climate change, neglected forests and the death of 130 million trees in the state have also combined to increase the potential devastation of each fire. Five of the six largest fires in recorded California history occurred last year.

Gov. Gavin Newsom last week expanded a drought emergency, the second major drought of the past decade, to most of the northern half of the state and large parts of the agricultural Central Valley. The declaration directs authorities to retain higher levels of water in upstream reservoirs for release later in the year.

Reservoirs in many parts of the state look like scenes from a climate change documentary, with formerly submerged tree stumps now appearing above the water line. Satellite imagery shows an exceedingly thin layer of snow on the Sierra Nevada, the state’s crucial reservoir of water. The volume of water held in the snowpack is just 5 percent of normal, according to the Sacramento office of the National Weather Service.

Last month was the driest April in Sacramento since official record keeping began in 1877, the office said.

Daniel Swain, a climate scientist at the Institute of the Environment and Sustainability at the University of California, Los Angeles, said the risk of fires in California’s inland forests was “exceptionally high this year.” Measurements of vegetation moisture and flammability across Northern California are near or exceeding record levels for this time of year, he said.

Mr. Swain said the Palisades fire was itself not of significant concern, and Mayor Eric Garcetti of Los Angeles said on Monday that he expected the fire to be extinguished within a few days. But it was considered a warning shot for the state.

“It’s a portent of the truly extreme drought and climate-amplified risk that will likely emerge later this season,” Mr. Swain said.

Northern California residents were surprised last week to see red flag warnings, which signify an elevated risk of fire, posted on signboards at the entrances to their towns.

There was so little rainfall in the winter that fires from last summer were still smoldering in the Santa Cruz mountains in March — more than six months after igniting.

In Pacific Palisades over the weekend, theories about the origin of the fire have rocketed across social media. One person who was detained after posts online accused him of starting the fire was later released, Chief Terrazas said. “That person turned out not to be a suspect,” he said.

The second person was arrested on Sunday afternoon.

“We feel we have the right person,” he said.

‘Everybody is scared but we’re hopeful’: Oregon town tries to stay positive in the face of fires