WASHINGTON — Even as the Biden administration has moved aggressively to undo Donald J. Trump’s policies and dislodge his loyalists from positions on boards and civil-service jobs, it has hesitated on a related choice: whether to remove two inspectors general appointed by Mr. Trump under a storm of partisan controversy.

At issue is whether the new administration will keep Eric Soskin, who was confirmed as the Transportation Department’s inspector general in December, and Brian D. Miller, a former Trump White House lawyer who was named earlier in 2020 to hunt for abuses in pandemic spending.

Both were confirmed over intense Democratic opposition after Mr. Trump fired or demoted a number of inspectors general last year, saying he had been treated “very unfairly” by them.

By ousting or sidelining inspectors general who were seen as investigating his administration aggressively, Mr. Trump set off a partisan backlash that undercut a tradition under which nearly all inspectors general since Congress created the independent anti-corruption watchdog positions in 1978 were confirmed unanimously or by voice vote without recorded opposition.

The Biden team wants to repair what it sees as damage to the government wrought by Mr. Trump through his many violations of norms. It also wants to restore and reinforce those norms, according to people briefed on its internal deliberations about inspectors general dating back to the campaign and transition.

But in the case of inspectors general like Mr. Soskin, those two goals are seen as conflicting, those people said. To remove him would itself be another violation of the norm of respecting such officials’ independence and not firing them without a specific cause, like misconduct.

“It’s very possible — and it would be a real mistake — for the Biden people to remove those I.G.’s because they were appointed by Trump,” said Danielle Brian, the executive director of the Project on Government Oversight, a government watchdog group. “That would be essentially exacerbating the problems he created in the first place.”

Ms. Brian in December was one of the few outside observers to call attention to a little-noticed push by Senator Mitch McConnell of Kentucky, then the majority leader, to get Mr. Soskin confirmed as the Transportation Department inspector general. The 48-to-47 vote to confirm Mr. Soskin made him the first such official to take office on a purely party-line clash.

The office Mr. Soskin now controls has been investigating whether Mr. Trump’s Transportation secretary, Elaine Chao, improperly steered grants to Kentucky as her husband, Mr. McConnell, was seeking re-election there. During the lame-duck session, Mr. McConnell used his power to prioritize getting Mr. Soskin confirmed over four other inspector general nominees who had been waiting for floor votes longer, raising the question of why he was trying to ensure that a Republican appointee would control that post even after Mr. Biden took office.

“Hmm why would Majority Leader McConnell be pushing this nomination for Dept of Transportation IG today?” Ms. Brian wrote on Twitter on Dec. 18, a day after he filed a so-called cloture motion to end debate and hold an up-or-down vote on Mr. Soskin. “Perhaps it has something to do with the allegation of wrongdoing that office is reportedly handling against his wife, the Sec of Transportation?” 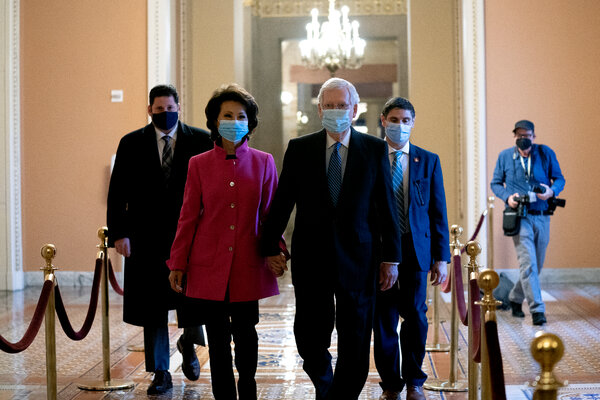 Mr. McConnell had on the same day also filed a cloture motion for a second inspector nominee, but not enough Republicans were in town when the clotures votes were held on Dec. 19 to constitute a majority, and both votes to end debate failed. He then successfully tried again for Mr. Soskin on Dec. 21 and got him confirmed, while abandoning the other nominee without explanation.

Earlier in the year, only one Democrat voted to confirm Mr. Miller, who had worked in the Trump White House, with others rejecting him on the grounds that he was seen as too close to the Trump administration to aggressively hunt for waste or fraud in pandemic spending during an election year.

Amid competing priorities, the Biden team appears not to have reached any decision about what, if anything, to do about Mr. Soskin and Mr. Miller. In a statement, a White House spokesman, Michael Gwin, extolled the general virtue of keeping politics away from such positions.

“President Biden believes strongly in the role of inspectors general in keeping government honest and protecting taxpayer dollars, and he’s committed to protecting their independent role in his administration,” Mr. Gwin said in a statement. “Any politicization of the inspector general community is highly inappropriate and has no place in government.”

Scrutiny of Mr. Miller has stemmed partially from the fact that he produced scant public sign of activity in his first eight months on the job.

But his office delivered a report to Congress on Monday describing some investigative work, including developing 69 leads about suspected fraud that were referred to law-enforcement partners and opening five new preliminary investigations. A person familiar with his office said he had hired 34 staff members by the end of January.

“I try to be bipartisan and nonpartisan — certainly as an inspector general and in everything that I do,” Mr. Miller said in an interview.

During Mr. Soskin’s confirmation hearing last summer, he also pledged to do his job impartially. Through a spokesman, he declined to comment about the status of the Chao-McConnell investigation.

A spokesman for Mr. McConnell, while not directly responding to a question about whether he prioritized Mr. Soskin because of that inquiry, pointed to a 2019 statement in which Mr. McConnell had made no apology for using his position to “to advance Kentucky’s priorities” after Politico reported on arrangements under Ms. Chao favoring grants to Kentucky.

At a time when the Senate is narrowly divided and the Biden team is trying to get major legislation passed, ousting Mr. Soskin would most likely anger other Republicans as well — particularly Senator Charles E. Grassley of Iowa, a champion of inspectors general.

Mr. Grassley scolded Mr. Trump last year over his failure to articulate a concrete reason for his removal of one such official, Michael Atkinson, who had sought to bring to Congress’s attention the whistle-blower complaint that led to Mr. Trump’s first impeachment. He also chastised President Barack Obama in 2009 for initially giving little explanation for removing the AmeriCorps inspector general.

“It’s hard to imagine how President Biden could have a good reason to fire an I.G. who’s only been on the job less than a month,” Mr. Grassley said in a statement. “If he chooses to fire any I.G., he’d better have a darn good reason to do it, and he’d better notify Congress well in advance, as the law requires. If he doesn’t, he’ll get the same earful from me that Presidents Obama and Trump got.”

Mr. Trump nominated Mr. Soskin in May, around the time he was moving against numerous independent inspectors general. The purge included firing some Senate-confirmed officials on the vague basis that he purportedly lacked confidence in them. He also appointed outsiders to serve as new acting heads of offices whose top positions were vacant — layering over the career deputy inspectors general who had been temporarily in control.

Mr. Biden sharply criticized the purge at the time during a Yahoo News town hall and pledged to act differently.

Some of the targeted officials had attracted Mr. Trump’s personal ire, such as Mr. Atkinson. Others were leading investigations that threatened Trump allies and other Republicans; he removed Steve A. Linick as the State Department’s watchdog, for example, at the request of Secretary of State Mike Pompeo, who was facing several potentially damaging investigations. (A subordinate to Mr. Pompeo later did accuse Mr. Linick of specific misconduct, but an inspector general council investigated and found that the evidence refuted his accusations.)

Filling the Transportation Department inspector general post last year had political sensitivities for both Mr. Trump and Mr. McConnell, then the two most powerful Republicans in Washington. In 2019, Politico reported that the department’s longtime inspector general, Calvin L. Scovel III, was overseeing an investigation into whether the department under Ms. Chao was improperly favoring grants to Kentucky as her husband sought re-election there.

In January 2020, Mr. Scovel retired for health reasons, and his deputy, Mitch Behm, took over as acting head. But in May, Mr. Trump installed a different acting head: Howard Elliott, a political appointee known as Skip who, in an unorthodox arrangement, remained subordinate to Ms. Chao. Mr. Trump also nominated Mr. Soskin, then a Justice Department lawyer, for the role.

Under Mr. Elliott’s tenure, the election came and went, and the office issued no report about grants to Kentucky. Mr. McConnell won re-election, but Mr. Trump lost, meaning political appointees like Mr. Elliott were set to leave by the inauguration. Had Mr. McConnell not pushed Mr. Soskin through, the office would have reverted to Mr. Behm’s control until Mr. Biden nominated and the Senate confirmed a new inspector general.

Still, Jack Goldsmith, a Harvard Law School professor who co-wrote a book proposing post-Trump reforms to government, said that no matter how well Mr. Biden might couch a justification to remove such an inspector general, it would further damage the notion that presidents ought not remove them without cause.

“If Biden refrains from firing Senate-confirmed but disfavored inspectors general, that will buck up the norm of independence,” Mr. Goldsmith said. “The ostensible norm is not an actual norm if it doesn’t constrain the president in painful ways.”