Home » Americas » We Met Them in the Depths of the Pandemic. How Are They Doing Now?

At the outset of the pandemic, I met many New Yorkers who were facing the challenges of the crisis in profound and transformative ways. Some watched as their livelihoods were destroyed, accelerating unwelcome retirement. Others were young and stopped short in their pursuits and promise. Others still saw opportunity in despair or managed to find serenity and quiet amid the tragedy and chaos.

Several people I profiled for this space during the spring sparked enormous interest from readers, some of whom wrote in the weeks and months that followed wanting to know what happened next and how they could help. I was curious too. So in the spirit of a reflective season, I caught up with those whose stories moved so many others:

The blues bassist who survived by playing live gigs

When I met Amy Madden in March she was a 67-year-old out-of-work bass player. Now she is a 68-year-old out-of-work bass player, because the pandemic shut down live music in New York (and everywhere). A Princeton graduate, Ms. Madden had also been working part time in an art gallery to supplement an income that had been declining for years, as one performance space after another in New York was lost to escalating rents. The gallery, of course, closed as well.

Because she was lucky enough to own a small apartment, where she raised her son, she was not facing homelessness as some of her musician friends were. But paying her maintenance costs each month was difficult; she was living on food stamps.

None of that has changed. Occasionally, she will now visit the food pantries where she used to volunteer. Ms. Madden does this mostly to get meals to friends and neighbors who are ashamed or unable to go themselves. For Thanksgiving, she got a turkey at a pantry uptown and fed the people working in her building.

After my column was published in early May, Ms. Madden was flooded with offers of help from old friends and complete strangers, so she set up a GoFundMe campaign in order to raise enough money to produce an album that would allow her to employ other musicians who were also without work. More than $12,000 came her way, but she hasn’t touched that money, she said, because the people with whom she would make a record are all around her age — vulnerable and anxious about going into a recording studio with other people and poor ventilation.

Ultimately, she observed, it was Covid-19 that aged the ageless rocker. “It’s like these great football players — you’re a quarterback and you take two years off at 40, you’re not coming back. We all suddenly got old and turned the page.”

Still, there have been moments of good news, pleasure — even delight. The gallery reopened, and Ms. Madden works there from time to time on Saturdays. Someone she knows in Norway offered to make her a guitar, even cutting down a tree for it. She reconnected with an old friend who married a rich fishmonger and sends her fresh fish. She continues to write poetry and struck up a vigorous correspondence with a fan — a nurse in Colorado who recently left her husband for a woman.

As ever, Ms. Madden succeeds in holding mourning and gratitude in the same hand. “I miss so deeply the joy of performance," she wrote to me this past week, “the live creative moment; the presence; the conversation among us onstage — the magic that can happen, the unexpected.” 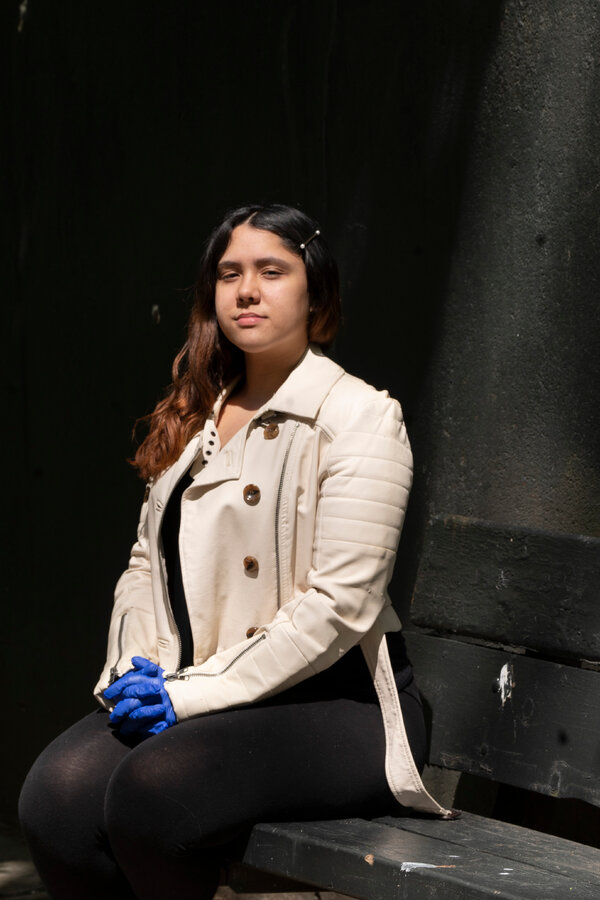 When the dorms closed, she had no place to go

Last fall, Destiny Moura had set herself on a new path as a freshman at the Borough of Manhattan Community College, after a traumatic childhood marked by abandonment, neglect and an adolescence spent in sex work. When the pandemic hit, she suddenly lost her newfound stability: a room in a residential hotel in Midtown that served as student housing. Dormitory spaces around the country had cleared out; young people were going home, but Ms. Moura did not really have a home. And in June, about to turn 21, she was aging out of the foster care system.

I often write about people struggling with the repercussions of lives spent in poverty, and many readers express a desire to help. But the response to Ms. Moura’s circumstance was of another order entirely. Countless emails came in, many from empty nesters offering to give her a room in a house or an apartment. Many more wanted to send her money. CASA, an organization of volunteers helping children and young adults in foster care, collected that money for her. Ms. Moura is saving it all, Kerry Moles, CASA’s executive director, told me, so that she will have a nest egg for an apartment of her own when she graduates from college.

Nervous about entering into another housing situation that inevitably would be short lived, Ms. Moura had returned to the apartment of her father and aunt, where so many of her problems were rooted, and stayed there for several months. She had a long and stressful summer, Ms. Moles said, but reached out for support when she needed it.

This fall though she moved into a dorm space in Queens with roommates and a kitchen. CASA helped her decorate her room. “She’s working hard in school and she has huge aspirations," Ms. Moles said.

They survived the Spanish flu and the Holocaust

As the rest of the world was unraveling in March, Eva Kollisch and Naomi Replansky greeted the pandemic with a calm born of the long view. Between them they had survived the Spanish flu, the Anschluss, family separation, anti-immigrant bigotry, homophobia and nearly every other ravage of the 20th century.

Together since the 1980s, Ms. Kollisch, 95, and Ms. Replansky, now 102, have spent the pandemic in their Upper West Side apartment safely, in good health. They have been reading and writing prodigiously; they have gone on socially distant picnics. Ms. Replansky, who was a finalist for a National Book Award for poetry in 1952, is now having one of her collections republished and is rereading “The Brothers Karamazov.”

For her part, Ms. Kollisch is working with the Museum of Jewish Heritage for an upcoming exhibit. However driven by their aesthetic passions, the couple is not above Netflix. They watched and loved “The Queen’s Gambit.” Now Ms. Replansky is working on her chess game.

When I was introduced to Father John Merz, a hipster priest in Greenpoint, he had galvanized a mobile food pantry operation he helped start — North Brooklyn Angels — to bring meals to overworked employees at Woodhull hospital. He hired newly unemployed restaurant workers to do the cooking. Over three months, the project produced about 27,000 meals.

When the hospital crisis began to abate, Father Merz’s focus shifted to homebound elders and the increasing number of people forced into food insecurity by the pandemic. North Brooklyn Angels soon doubled the number of sites it served.

Good things happened along the way. Grandaisy Bakery in TriBeCa began donating approximately 20 “very long," as Father Merz put it, bags of bread every day. The Brooklyn Nets donated a Honda minivan. With transport and connections to other smaller-scale community groups, the North Brooklyn Angels emerged as a distribution center for food and household supplies.

“Let’s say someone drops on your steps 15,000 pounds of diapers,” Father Merz said. “You’ve got to move them fast. So we call these groups and say, ‘Hey, do you need a thousand pounds of diapers?’”

At some point Father Merz couldn’t help but notice a volunteer who was coming in to work at the Angels kitchen every day. “She was intimidating, very no-nonsense," he recalled, “like she really knew what she was doing." The woman was named Sarah Herold, and she was the general manager of Frenchette, the celebrated TriBeCa restaurant. Moved by the mission, she quit her job there and began working this week as a staff member for the Angels, running the kitchen.

“We know there is light at the end of the tunnel, and we have learned a lot in the tunnel,” Father Merz said. “So much of this has been such a huge gift: You know, man, yeah, this sucks. But we have had so many people come through the door to volunteer, and their lives are falling apart. But they are here.”