Home » Americas » What Californians Think About the Housing Crisis and Wildfires

A couple of days after Los Angeles officials announced that the region’s population of people without homes had grown, newly released data reflects that housing continues to be a top source of anxiety for Californians across the state.

More than half of adults polled by the Public Policy Institute of California last month said their housing costs caused a financial strain. The highest percentage, 58 percent, was in the Orange County and San Diego area.

“There’s this very pervasive sense that something’s broken when it comes to housing and homelessness,” Mark Baldassare, the institute’s president and chief executive, told me.

And he said he expected the frustration to have an effect not just on the Legislature and governor, but also on House races and the presidential primaries.

As for possible fixes, a large majority of adults, 62 percent, said they were in favor of mandating that local governments change their zoning laws to allow denser development near transit centers and job hubs. (That, you may recall, is about what the controversial Senate Bill 50 would have done had it not died in the Legislature this year.)

However, Californians were less likely to see changing the California Environmental Quality Act, which has been criticized for slowing down construction, as a helpful solution: 47 percent supported changing the act to make development easier.

The survey also found that 78 percent of Californians are worried that the cost of wildfires caused by utility equipment — like the Camp Fire, caused by Pacific Gas & Electric’s equipment — will be passed onto ratepayers.

Views on Gov. Gavin Newsom’s handling of PG&E’s bankruptcy were more mixed. About a third of adults surveyed said they approved of the work he’s doing on that front.

“What this tells me is that it’s complicated, but that they have in the back of their minds some concern about what the impact is going to be on them, and what they might need to confront later on,” Mr. Baldassare said.

(We often link to sites that limit access for nonsubscribers. We appreciate your reading Times coverage, but we also encourage you to support local news if you can.) 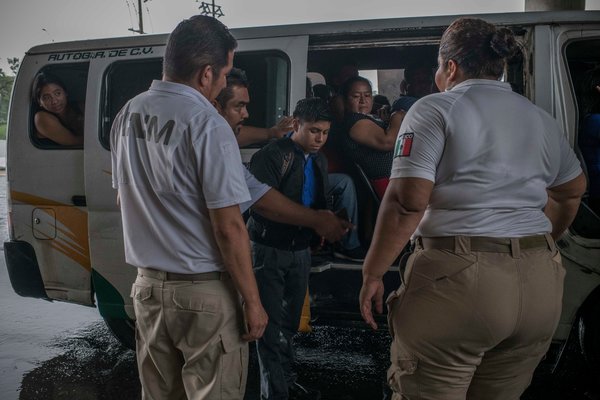 • The U.S. and Mexico have gotten closer to an agreement that would avert President Trump’s tariffs on Mexican imports. The changes under consideration would give the U.S. more ability to reject requests for entry from migrants fleeing violence. [The New York Times]

• Democrats are lining up to challenge Representative Devin Nunes. That includes Andrew Janz, who got within five points of beating Mr. Nunes last year, and now, a Latino businessman from Fresno, Phil Arballo. [Politico]

• Federal law enforcement officials announced a crackdown on the Aryan Brotherhood in California prisons. A yearslong investigation tied the gang to at least five inmate slayings. [The Sacramento Bee]

• A long-awaited mural memorializing Oscar Grant III, who was shot by an officer at the Fruitvale BART station, will be unveiled there this weekend. “When someone enters that space, they’ll see a physical manifestation of a government and a community trying to heal.” [The San Francisco Chronicle]

• In San Clemente, a video of rats at a homeless encampment — which some believe were store-bought and planted there — may be the latest attempt to either run homeless people out of town, or to get the city to do it. [LAist/KPCC]

• Craig Newmark, the founder of Craigslist, has joined forces with Consumer Reports, a lion of public service journalism, to expand its coverage of the tech industry. Craigslist drained the classified advertising revenue that once was the lifeblood of American newspapers. [The New York Times]

• What appeared to be a rain cloud, 80 miles by 80 miles, over San Diego County this week was actually ladybugs. [The Los Angeles Times]

• Get ready for the Women’s World Cup, which kicks off in France today. The U.S., featuring the Californian Alex Morgan, is going to be good. [The New York Times]

• Wakamatsu Farm, the first Japanese settlement in the U.S., will commemorate its 150th anniversary. Read about its history. [The Sacramento Bee]

• A woman said she was raped in the L.A. strip club where she worked. She told the club’s management and she told detectives. Nothing happened. So she painted a billboard. Here’s a long read about everything that happened. [California Sunday]

• Read a tale of two nuns who worked at a Catholic school in Torrance. They liked going to Vegas and one was apparently very good at poker. Then they got fired because school administrators said they’d stolen a lot of money from the school. Cue gossip. [GQ]

Yesterday, we introduced our new California Soundtrack and asked for your favorite California songs.

And we got hundreds of responses. On Twitter, in our inbox, on Facebook. We’re so grateful to anyone who shared a tune or a story — and we’re still going through them. We’ve added a couple dozen of your suggestions to this playlist, and we’ll add more as the weeks go by.

Right off the bat, some songs seemed to jump to mind more often. “Hotel California,” by the Eagles was a big one.

Tupac’s “California Love,” many people said, is a timeless unifier.

“Lyrically, it captures the different experiences of living in California, all of them underscored by the pursuit of fame and fortune,” wrote Xavier Bishop of San Diego. “At 63, I’m a reluctant rap fan. Even so, it’s difficult not to pat your feet, clap your hands or get up and dance when you hear the song’s ethereal intro.”

And of course, “California Dreamin’” makes Californians feel feelings — no matter where they are.

Robert Smyth of Coronado said he moved around a lot while he was growing up.

“On a dripping winter day in 1966 I ducked into a record store in a cold downtown London, and in a listening booth I put on a record by an American quartet,” he wrote. “Suddenly I was back in the sunshine.”

But while almost everyone recommended the 1966 classic by the Mamas and the Papas, Gina of San Francisco wrote that she prefers Queen Latifah’s 2004 rendition:

“Her version evokes longing and hope for me in a way the original recording does not.”

Poll boost for Trump in states crucial to 2020 election victory

The Crisis Lurking in Californians’ Taps: How 1,000 Water Systems May Be at Risk