But this time, West has lent his design skills to raise awareness of how black people feel about politics. How they feel about Democrats, to be specific.

The rapper has created a line for Candace Owens, who is urging black Americans to abandon the party by supporting Blexit – the black exit from the Democratic Party.

Ms Owens, a vocal supporter of Donald Trump who has been publicly critical of movements such as Black Lives Matter, believes black people are expected to be Democrats and face harsh criticism when they announce their conservatism.

The official Blexit website describes the movement – which stands for black exit and has taken its name from Brexit, in case it wasn’t obvious – as “a frequency for those who have released themselves from the political orthodoxy”.

It says Blexit is a renaissance – “our formal declaration of independence”.

In an article for Breitbart News, which became one of the go-to sources in 2016 for those supporting the Trump campaign, Ms Owens wrote about her views in an op-ed called Blexit: In My Own Words. 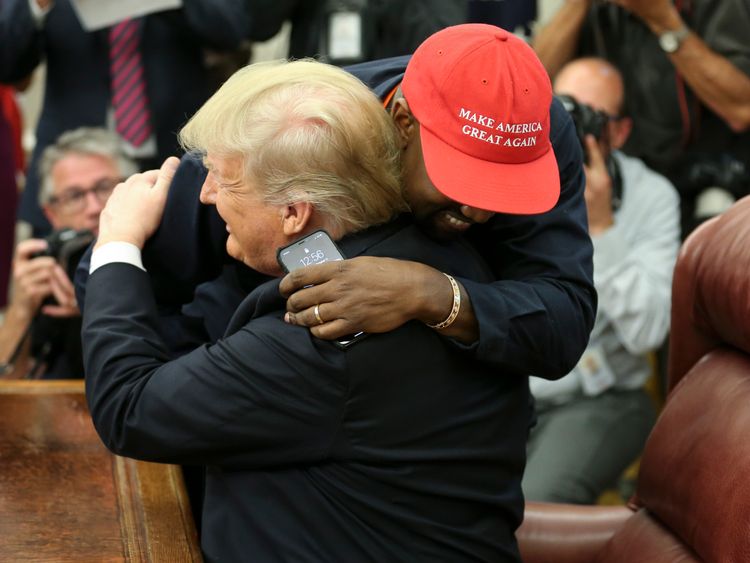 “For decades, the black community has been in an emotionally abusive relationship with the Democrat Party,” she wrote.

“BLEXIT is a national movement of minorities that have awakened to the truth. It is for those who have taken an objective look at our decades-long allegiance to the left and asked ourselves ‘What do we have to show for it?'”

She says it is the norm that “black people are meant to think and act within the confines of what white liberals deem acceptable”.

The merchandise debuted on Saturday at the Young Black Leadership Summit in Washington DC.

It was organised by Turning Point USA, headed by Ms Owens, who has been praised by West in the past.

“Blexit is a renaissance and I am blessed to say that this logo, these colours, were created by my dear friend and fellow superhero Kanye West,” Ms Owens told the crowd.

“[West] has taken one of the boldest steps in America to open a conversation we have needed to have.”

It comes after West’s recent visit to the White House where the rapper and the president discussed a range of topics including manufacturing, prison reform, preventing gang crime and reducing violence in Chicago – where the star grew up.