Home » Americas » What Proposition 14 Tells Us About California 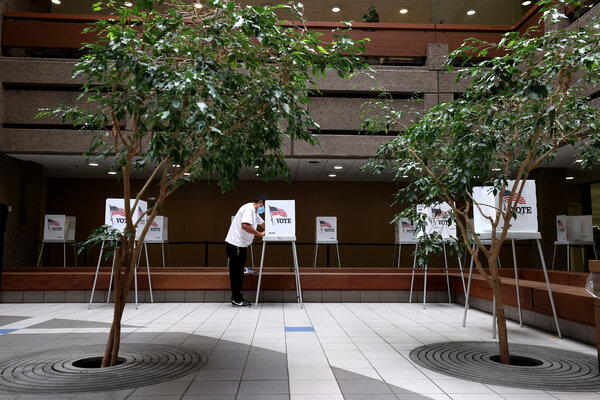 Tapping through Instagram stories is not where I expected to find the actor Seth Rogen looking very serious.

And yet, there he has been over the last couple weeks, nodding solemnly as his wife, Lauren Miller Rogen, talks about Alzheimer’s research. A big block floating near their heads reads, “Yes on 14.”

That’s Proposition 14, one of the dozen propositions on the statewide ballot this month.

[Read more about what’s on this year’s statewide ballot.]

The measure, which would put $5.5 billion in state bond money toward stem cell and other medical research, is not something most Californians are likely to have spent a lot of time thinking about.

Mr. McCuan is a political-science professor at Sonoma State University who has studied California’s ballot initiatives for two decades.

Historically, it’s been hard to get voters to say yes to the questions they’re posed on the statewide ballot, he said, whether they’re being asked to spend more money on something like stem cell research or to change laws made by the Legislature. But that’s been shifting.

“We see things where the ‘yes’ side and the coalitions that form under initiative politics are becoming better learners,” he said. “Donors are strategic, and the ballot measure itself is specific about what it will do.”

He said that as the strategy behind California’s propositions — the crafting of ballot language, the timing of ad spending — has become more sophisticated, the money behind them has become astronomical.

“This is the second most expensive political exercise in the free world,” he said. “You’re looking at around $650 million so far for 12 ballot measures.”

Much of that spending this year has been by proponents of Proposition 22, the complicated ballot initiative that would exempt ride-sharing companies like Uber and Lyft from requirements that they give drivers protections and benefits due to employees under the state’s new gig-work law.

[Read more from The Los Angeles Times about arguments for and against Proposition 14.]

But millions of dollars have been spent even on something much lower profile, like Proposition 14.

The coalition that put it on the ballot has raised more than $13.4 million in support of the measure, according to the California Fair Political Practices Commission, which lists top donors to each campaign. Most of that money has come from Robert N. Klein, a real estate investor, as well as Dagmar Dolby, the widow of Ray Dolby, the sound magnate.

It would re-up funding for the state’s stem cell research agency, which was started with the blessing of California voters, who approved the first bonds in a 2004 ballot measure, to fill in gaps left by a federal ban on funding for research using new embryonic stem cells.

[See The Times’s full voter guide for Californians, with information about how, when and where to cast your ballot.]

Proponents, who include Gov. Gavin Newsom and the University of California Board of Regents, say it’s critical, lifesaving work that takes time and resources.

Opponents say that the measure would saddle California taxpayers with even more debt during an economic crisis, and that the money the agency has already spent hasn’t yielded worthwhile results.

Further, as the editorial boards of The Los Angeles Times and The San Francisco Chronicle noted, the ban on federal funding, under President George W. Bush, was reversed by President Barack Obama.

But the fight is lopsided: There’s no significant organized campaign against the measure. The Secretary of State’s office showed that the “No on Proposition 14” committee raised just $250.

And while he suggested opponents of some ballot measures may save up to fight the results in court — 70 percent of the ballot measures that go to the ballot through popular petition and are passed are found unconstitutional — he doesn’t see that happening with Proposition 14.

In essence, the measure shows the system doing what it was intended to do: Give anyone an opportunity to ask voters to weigh in on a question — as long as they have the money to get their message out, Mr. McCuan said.

Still, he said, “a high stakes general election can sweep up, or lead to some surprises.”

Read more about politics and the ballot in California:

Uber and Lyft have been pushing their Proposition 22 message somewhere voters can’t escape it: their phones. [The Los Angeles Times]

Proposition 25 would end cash bail. Why are some progressive groups against it? [KQED]

Find information about all the propositions, including who’s putting money behind which side. [CalMatters | The Los Angeles Times | SFGate | Official voter information guide]

The campaign manager for Representative T.J. Cox admitted to using Photoshop to make it look like his opponent, David Valadao, retweeted the president’s post saying, “California is going to hell. Vote Trump!” Mr. Cox is the Central Valley Democrat fighting to keep the job he narrowly won in 2018 from Mr. Valadao, the moderate Republican who last held the seat. [KGET]

A long-running legal battle over the 2020 census took another turn. Here’s where things stand. [The New York Times]

Pacific Gas and Electric said more than 50,000 customers across a broad swath of Northern California would lose power as yet another round of hot, dry, dangerous weather descends on the region. The utility said on Wednesday that shut-offs would start that night and could extend until Friday night. [The New York Times]

Here’s how to check if your home may lose power. [The Mercury News]

The Bay Area is bracing for dangerous Diablo winds, which pick up in the fall. Here’s more about California’s “demonized” winds, and how they shape fire season. [The New York Times]

Health care workers at Harbor-U.C.L.A. Medical Center protested the shooting of a patient with a mental illness by a sheriff’s deputy. Sheriff Alex Villanueva described the incident as like a “scene out of ‘The Shining.’” That comment drew sharp rebuke from the hospital’s chief medical officer. [The Daily Breeze]

A man was spotted flying a jetpack near LAX. Again. [The New York Times]

One of the uncountable milestones that have been altered by the pandemic is the very act of giving life.

Midwives have said they’ve seen an increase in demand, as hospitals became, well, less hospitable to families who want to experience birth together.

My colleagues in Parenting published a photo essay showing midwives at work in Los Angeles. The images, like the one above, are raw and intimate and cinematic. See them here.