Home » What to Know About California’s Plan to Reopen Schools

Tuesday: Lawmakers unveiled a long-negotiated deal for reopening schools, but not everyone is on board. 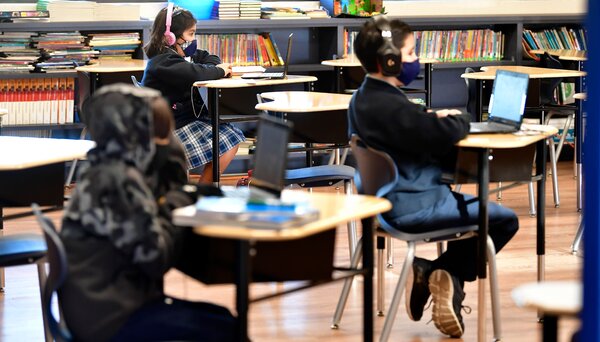 Almost exactly a year ago, on March 7, 2020, officials in the Elk Grove Unified School District — Northern California’s largest — announced that schools would close for a week in response to concerns that the novel, unknown coronavirus could spread like wildfire among students and educators.

It will never not be mind-boggling to look back on those early days of the pandemic. According to this special Saturday California Today from March 14, 2020, Sacramento County, which includes Elk Grove, had 16 confirmed coronavirus cases total at the time.

On Monday, Gov. Gavin Newsom announced that about 3,500 new Covid-19 cases had been reported over the previous day in the state and the test positivity rate was 2.3 percent — a cause for celebration, compared with where the state was a month ago, he said.

Mr. Newsom mentioned the promising statistics as he stood inside Elk Grove’s Franklin Elementary School, along with the district’s superintendent and leaders of the State Legislature as they unveiled what they said was the latest — and, ideally, last — sweeping, multibillion-dollar deal aimed at reopening schools.

Here’s what to know about the deal:

How does the plan work?

The plan essentially sets aside money to incentivize public school districts to bring students back into classrooms in stages. The deal involves a total of $6.6 billion: $2 billion in grants that would go toward safety measures such as protective equipment, ventilation upgrades and coronavirus testing. The rest, $4.6 billion, would pay for “expanded learning opportunities,” like tutoring and summer school, as well as expanded mental health services.

Districts would get a share of the $2 billion as long as they offer in-person instruction by the end of the month for children in transitional kindergarten through second grade, as well as high-needs students in all grades.

If schools are in a county that’s been able to move out of the most restrictive purple tier — meaning there are fewer than seven new cases per day per 100,000 residents — that timeline would be accelerated: Districts must reopen all elementary school grades and at least one middle or high school grade by the end of the month, in order to get the funding.

[Catch up on the state’s current reopening framework.]

If districts don’t meet that deadline to start bringing back students, they’ll lose 1 percent of their part of the $2 billion every day that they don’t. If the schools open after May 15, the number will shrink to zero.

Coronavirus: What you can and can’t do when Saskatchewan enters Phase 4.1 of reopening plan

Pentagon warns on risk of Chinese submarines in Arctic