Home » Americas » What to Know About Migrant Children in San Diego 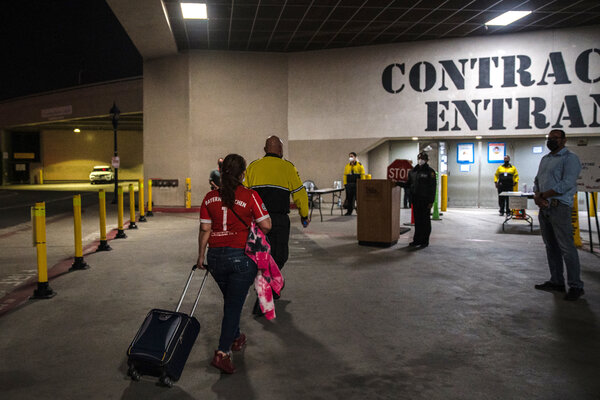 In recent weeks, thousands of children have crossed the southern border, traveling without parents, in pursuit of safety and security in the United States.

The surge has created one of the Biden administration’s biggest political challenges yet, as my colleagues have reported. It is also an urgent logistical trial, not just for the federal government but also for the local leaders and network of nonprofit organizations that have been called upon to help shelter the young migrants.

One of the first places to open its doors to the children was the San Diego Convention Center.

Earlier this week, I talked with San Diego’s mayor, Todd Gloria, about conditions there and about the role local leaders can play in addressing what he described as a humanitarian emergency.

So first, I’m hoping you can talk a bit about how San Diego got involved — what was the call like from the federal government?

I was living my life on a Saturday and I got this call. My predecessor had converted the convention center into a temporary homeless shelter.

The weekend of that call, I was preparing to go and observe the relocation of these unsheltered San Diegans to other city-operated shelters that had been shut down during the pandemic. So in my mind, I thought, “Yeah, we have a convention center that’s going to be available starting Monday.”

A number of years ago, San Diego adopted a “Welcoming City” policy. It was time to take those policies and make them real.

We started welcoming children about a week later.

[Read an interview with Mr. Gloria shortly after he was elected.]

What kind of capacity is there at the convention center? And about how long are children staying there?

Our capacity based on social distancing is 1,450 children. And we’re about there right now.

We’ve been receiving children on a daily basis. That first day we got about 500 kids.

As the children come forward, they’re treating them uniquely. Some kids have extreme health issues and need to be transferred to medical facilities. Some of the children have arrived and are pregnant, and it’s just not an appropriate setting for them.

The average stay is expected to be about 30 days, our federal partners have told me. That’s a period of time to establish contact with family members or sponsors, verify identities. The concerns around labor and human trafficking are significant — we’re doing our due diligence to make sure that doesn’t happen.

Can you describe what the conditions are like at the site?

As the mayor of the city, it’s important to me that they meet the high standards that I expect of someone operating in that building. We’re not going to have any chain link fencing. We’re not going to have any tin foil blankets. The conditions there are far superior to what I’ve seen where these children were previously located in immigration detention or in custody. But it’s not a home, right?

It looks like a convention center, with a lot of cots clustered in groups of 50. There’s stuff around the perimeter, like tables for crafts. When I was there on a Sunday morning, they were making bracelets with beads. The San Diego Loyal soccer team donated some soccer equipment.

There are some classrooms on the second floor. Rady Children’s Hospital is on-site. It’s staffed by federal employees, county employees and nonprofit partners led by South Bay Community Services.

What would you say to constituents or anyone, really, who says these are inhumane conditions for children? Or, conversely, that they don’t want San Diego to pay to take care of them? Have you heard comments like that?

I’ve heard, “I don’t want city resources going to that.” But this is on the federal government’s dime. The only city resources in this is our convention center, which is a public asset and it would not be used if it weren’t for this. You can’t have a major convention in California right now.

When we have a need that involves children, why would you leave that asset unutilized? Why would you let the workers who work there stay on unemployment when we can put them to work helping care for these children?

When people are hurting, you have to take action. No one, I think, feels this situation is ideal. But if you want to wait until this gets fixed, that means leaving children in absolutely unacceptable conditions. So I didn’t hesitate to say yes. The County of San Diego did not hesitate to say yes.

How long do you anticipate being able to do this? What’s the endgame?

Our lease with the federal government goes until July 15. And we we’ve been very clear on that. When I said yes, to my knowledge the only city doing this kind of operation was Dallas.

Subsequently, there have been other cities to either raise the hand and volunteer, like Long Beach, or I think there are others in negotiation. The inventory of shelter options is growing. That gives me some confidence. This is an emergency response posture.

But the federal government is sheltering thousands of children on any given day. Some of that, it seems, was really diminished or undermined during the Trump administration. So it isn’t to the scale that the current situation demands.

What I see is our partners at the Department of Health and Human Services working to grow that existing network of non-congregate settings, which are better than these large-scale operations like at our convention center.

I take some pride in that we actually set out with high expectations and we’re meeting those. And I think that is getting other cities and other communities comfort to say, “OK, this is what it looks like.”

[Read more about the anxiety parents are facing not hearing from their children.]

Three top federal health officials appeared on Capitol Hill and implored Americans to get vaccinated, but said little about the investigation into the Johnson & Johnson vaccine. [New York Times]

California regulators are stepping up their oversight of PG&E, after concluding the company was stumbling on wildfire safety by doing a bad job of removing trees and hazardous power lines. [Sacramento Bee]

The City Council of Placerville, in Northern California, formerly known as “Hangtown” because of its 19th-century history of vigilantism, voted to eliminate a noose in its city logo. [New York Times]

The Bay Area has a large Afghan community, and many members moved there after the Sept. 11 terror attacks. They reacted to the announced U.S. pullout from Afghanistan. [NPR]

In spring 2020, the wine industry was scrambling to find a way of selling wines, worrying whether they would be able to pay their workers and concerned about how their businesses would survive. A year later, their worst fears were not realized, and some wine producers are doing better than they thought possible. [New York Times]

He Befriended 4,000 Dogs to Get Their Side of the Story