President Trump, who has frequently pointed to the violent MS-13 street gang to justify his immigration policy, could not have choreographed a better political talking point if he had tried. Two days before Tuesday’s State of the Union address, a deadly shooting on a Queens subway platform catapulted the gang’s brutality back onto the national stage.

The police have said the man charged with the killing, Ramiro Gutierrez, is a member of MS-13, a transnational gang founded in Los Angeles with ties to El Salvador. The slaying featured prominently in Mr. Trump’s address.

Mr. Gutierrez, 26, was in the country without documentation and had a long arrest record, the authorities said. He is accused of firing six shots at close range into a rival gang member’s head in front of horrified straphangers. At the time, Mr. Gutierrez was out on $2,500 bail after being arrested in a gang takedown last December.

But missing from Mr. Trump’s speech was an important nuance: The shooting does not signal a recent rise of the gang in Queens, experts said. Neither MS-13, nor its rival, the 18th Street gang, is new to New York City. They have been a violent presence in the city for two decades, despite repeated prosecutions, and the shooting on Sunday was just the latest incident in a complicated history between the two gangs.

What happened on Sunday?

Around 12:45 p.m. on Sunday, a fight broke out between four men on a Manhattan-bound 7 train. When the train pulled into the 90th Street-Elmhurst Avenue Station, the brawl spilled out onto the platform.

Six shots rang out, as bystanders screamed and ran for cover on the stalled train. Mr. Mosso was struck several times in the face and died on the platform. The police arrested Mr. Gutierrez on Monday on charges of murder and gang assault.

Mr. Mosso, a Mexican citizen, was a purported member of the 18th Street Gang. Both men, according to immigration officials, were in the United States without documentation. 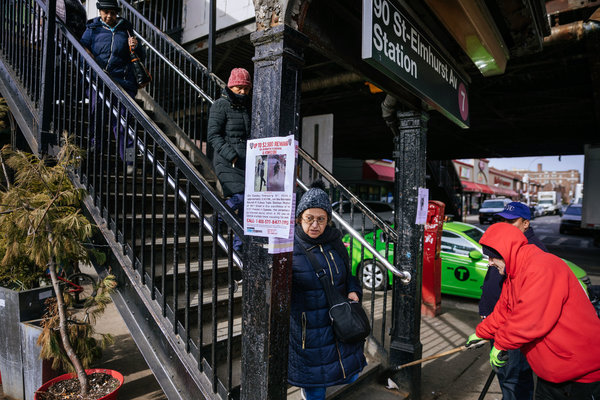 Though both gangs began in Southern California in the mid-1980s and quickly became archrivals, MS-13 and 18th Street had established a presence in eastern Queens, and neighboring Nassau and Suffolk Counties by the mid-1990s.

Lou Savelli, a former sergeant and head of the Police Department’s first citywide gang unit, said MS-13 and 18th Street have been active in New York City and the surrounding region ever since. Mr. Savelli, who retired from the department in 2004, first encountered MS-13 while working gang cases in the 109th precinct in Flushing.

During MS-13’s early years in New York, the gang would sometimes be targeted by the squad for acts of violence, he said. “We did some short-term things on machete cases where they chopped up one guy, shot and killed another guy, and another case where they ran an auto-theft ring,” Mr. Savelli said.

“Historically, that’s been their territory, and they’re known as M-18,” Mr. Ramos said.

The Queens district attorney and the United States attorney’s office in Brooklyn have filed dozens of criminal cases against MS-13 members over the past decade, with charges including racketeering, conspiracy, murder, fraud and robbery.

A penchant for brutality, inflated by politics

Aided by statements like Mr. Trump’s in his State of the Union address, MS-13 has achieved an almost mythic level of infamy in the world of street gangs. Their notoriously gruesome killings — members have been known to cut the hearts out of victims or hack people to death with machetes — began surfacing in New York and Long Island as far back as the mid-1990s.

The gang has plagued Long Island and Queens in recent years with a series of brutal slayings. In 2016, the gang killed two teenage girls in Brentwood — Nisa Mickens, 15, and her best friend Kayla Cuevas, 16 — in a case that drew national attention and landed the victims’ parents an invitation to Mr. Trump’s first State of the Union address.

Last summer, 15-year-old Angel Soler was found in a Long Island field, hacked to death by a machete, a murder law enforcement officials attributed to MS-13. And in December, a 23-year-old man was found dead in a Queens bird sanctuary after MS-13 members lured him there, prosecutors said.

Beyond murder and assault, the MS-13 gang has also been linked to drug and gun trafficking, as well as extortion and racketeering schemes; the 18th Street gang is better known for prostitution, protection rackets and selling forged documents.

Still, the gangs exist in pockets of the city, and the violence they generate is seldom random, law enforcement officials said. Often, it involves turf wars and other immigrants. Other gangs — the Bloods, the Crips, the Latin Kings, the Trinitarios — are a higher priority for the New York Police Department.

“I wouldn’t put them at the top of the pecking order of what we see day in and day out,” said Chief Dermot Shea, who runs the department’s detective bureau.

A street gang with a Mafia-like style

It took years for law enforcement to sketch out MS-13’s inner workings, and to recognize its hierarchy. It was far more organized than most street gangs, almost akin to the Mafia, prosecutors said.

“The guys who get caught with the gun at the murder scene, they’re going to be replaced,” said James Trusty, a former prosecutor who led the Justice Department’s Organized Crime Division. “The only way you’re going to actually dent the organization as a whole has got to be holistic.”

As MS-13 established its foothold in the mid-2000s, approaches to crackdowns varied between the three major American metropolises where the gang existed — New York, Los Angeles and Washington.

Prosecutors in Los Angeles and outside the capital built complicated conspiracy cases, taking out MS-13 leaders, but in New York prosecutors favored striking fast, arresting two or three people at a time after murders and robberies.

Long Island prosecutors changed their tactics after a spike in MS-13 violence in 2016 and 2017 led to at least 22 killings. Madeline Singas, the Nassau district attorney, indicted 17 MS-13 members in January 2018, including the man believed to be the highest-ranking member in the Northeast.

“It’s tough for the organization to bounce back from that,” Ms. Singas said.

Still, Ms. Singas said she does not believe that Long Island’s crackdown pushed the gang west into Queens.

“They were in Queens before, too,” she said. “It’s not like they moved there because Nassau became inhospitable to them.”