Home » Americas » What We Know About Ronald Greene’s Death

The death of Ronald Greene after a police chase in Louisiana in 2019 is attracting new scrutiny after police body camera footage was published that appears to show a starkly different version of events than the one given by the Louisiana State Police.

The death is under investigation by the F.B.I. and other federal agencies, and Mr. Greene’s family has filed a wrongful-death lawsuit accusing the state police of covering up the cause of his death.

Here’s what we know about the case.

Who was Ronald Greene?

Mr. Greene was a 49-year-old Black man who lived in Monroe, La. He was married, worked as a barber, and had recently gone into remission after battling cancer for two years, according to CNN. He was on his way to meet his wife in Florida when he died shortly after midnight on May 10, 2019.

What was his family told about his death?

The authorities told Mr. Greene’s relatives that he died from injuries he sustained in a crash outside Monroe after he failed to stop immediately for a traffic violation, a lawyer for his family said.

The Associated Press reported, citing the Union Parish coroner, that Mr. Greene’s death was ruled accidental and was attributed to cardiac arrest, and that the coroner’s file made no mention of any struggle with the police.

What does the body camera footage show?

The A.P. obtained body camera footage of the episode and published three excerpts on Wednesday. The footage shows Mr. Greene’s S.U.V. stopped on the side of the road. Troopers are seen opening his vehicle and jolting Mr. Greene with a stun gun, and Mr. Greene is heard to scream “I’m sorry” and “I’m scared.”

According to The A.P., which said it had obtained 46 minutes of video footage from the encounter, one trooper wrestled Mr. Greene to the ground, put him in a chokehold and punched him in the face. Another trooper is seen briefly dragging Mr. Greene by shackles on his ankles as he lay on the ground.

In the clips published by the A.P., covering more than two minutes of the encounter, Mr. Greene is seen being jolted again with a stun gun while lying handcuffed on the ground.

The A.P. reported that the troopers, who were white, left Mr. Greene lying facedown and moaning for more than nine minutes, as they wiped blood from their hands and faces. “I hope this guy ain’t got AIDS,” one of the troopers is heard to say, adding an expletive.

Video from several minutes later shows Mr. Greene limp, unresponsive and bleeding from his head and face, and he is then seen being loaded onto an ambulance gurney with his arm cuffed to a bedrail, according to The A.P.

How did the footage become public?

The A.P. did not say how it obtained the video.

The authorities have not publicly released any footage of the troopers’ encounter with Mr. Greene, as has been done with footage of some other recent episodes of police violence across the country.

A lawyer for the Greene family said that the footage was shown to Mr. Greene’s mother and sister last fall, but that he had not released it.

What do the police say happened?

Mr. Greene’s family said state troopers initially told them that Mr. Greene died on impact after crashing his vehicle into a tree during the chase, according to The A.P.

A single-page crash report, released later by the state police and reviewed by The A.P., said that troopers tried to stop Mr. Greene for an unspecified traffic violation, but that he refused to pull over and troopers pursued him.

The report says that the chase ended when Mr. Greene’s vehicle crashed; that he was taken into custody after struggling with troopers; and that he became unresponsive and died on the way to a hospital, The A.P. reported. The news agency said the crash report did not mention any use of force by troopers.

The Louisiana State Police later released a statement acknowledging that the troopers did use force in the encounter, and saying the use of force was justified. It did not open an internal investigation until 474 days after Mr. Greene’s death, according to The A.P. 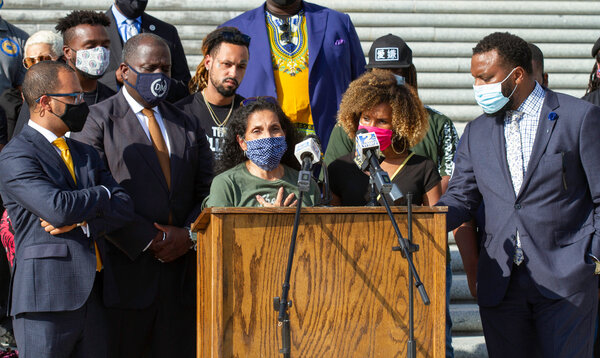 What does the Greene family say happened?

Mr. Greene’s family sued the police for wrongful death in May 2020, arguing that he had died as a result of a struggle with troopers that “left him beaten, bloodied and in cardiac arrest.”

In their lawsuit, Mr. Greene’s relatives said that there was no sign that the front of Mr. Greene’s vehicle had struck anything, and that his airbag had not deployed. Mr. Greene got out of the vehicle uninjured and could “walk, speak and otherwise function in a healthy manner,” according to the lawsuit.

The suit alleges that two troopers pinned Mr. Greene down and shocked him three times with a Taser while he begged them to stop. Emergency medical technicians who were called to the scene found Mr. Greene unresponsive, with several stun-gun barbs stuck in his body, according to the lawsuit. Included in the court papers are photos that circulated online, appearing to show Mr. Greene’s bruised and bloodied face.

The family commissioned an independent autopsy that found severe injuries to Mr. Greene’s head and skull and several wounds to his face, the family’s lawyer said. After examining the damage to Mr. Greene’s vehicle, which was mostly on the rear driver’s side, an accident reconstruction expert concluded that it was inconsistent with a fatal collision, the lawyer said.

Why hasn’t the body camera footage been officially released?

The Louisiana State Police said on Wednesday that the investigation into Mr. Greene’s death remains under review by federal and state authorities. The department described the release of the footage obtained by The A.P. as “premature” and unauthorized.

A spokesman for the department said the agency could not yet release body camera footage or the police report on the chase and its aftermath because the encounter is the subject of an administrative and criminal investigation.

In September, federal authorities opened a civil rights investigation into Mr. Greene’s death. The F.B.I., the Civil Rights Division of the Justice Department and the United States Attorney’s Office for the Western District of Louisiana are handling the federal investigation, according to an F.B.I. spokeswoman.

Gov. John Bel Edwards of Louisiana said in a statement that he had arranged for Mr. Greene’s family to view the body camera footage last year, but that he agreed not to publicly release the video until the federal investigation had concluded.

What has happened to the officers involved?

The lawsuit filed by Mr. Greene’s family includes seven defendants, three of whom are not identified by name, according to CNN. The A.P. reported that six troopers were involved in the encounter.

One of the troopers, Kory York, was temporarily suspended and has since returned to the force, the State Police said.

Another, Chris Hollingsworth, died in a car crash in September 2020, the State Police said. The A.P. reported that Mr. Hollingsworth had been notified hours earlier that he would be fired as a result of an internal police investigation into Mr. Greene’s death.

A third, Dakota DeMoss, who chased Mr. Greene at speeds exceeding 115 miles an hour, according to The A.P., was one of four Louisiana state troopers arrested in February in an unrelated case on charges of using excessive force and deactivating their body cameras while making arrests.

Coronavirus: Pandemic has set the number of air travellers back decades