As the candidates for mayor of New York City barrel into the final stretch of an unpredictable contest, time is running short for standout moments and efforts to redefine the race.

Indeed, one of the last chances to reorder the contest arrives on Wednesday night, as eight candidates gather for the final debate ahead of the June 22 Democratic mayoral primary that is almost certain to determine the city’s next mayor.

Eric Adams, the Brooklyn borough president, is widely regarded as the front-runner and is expecting to be a focus of attacks again, allies say.

He has strong support among Black voters and is connecting across the city with New Yorkers who are motivated by fears of crime, polls show. Kathryn Garcia, a former sanitation commissioner; Maya Wiley, a former counsel to Mayor Bill de Blasio; and Andrew Yang, a former presidential candidate, are also considered among the top candidates, and one of them could still pull ahead in the final days of a turbulent and rancorous race.

Mr. Adams has come under growing scrutiny over issues from his fund-raising practices to questions of residency. The debate is one of the last opportunities for his rivals to offer a counternarrative about his candidacy.

Each of the leading candidates has different mandates headed into the debate, which is co-sponsored by WNBC-TV. 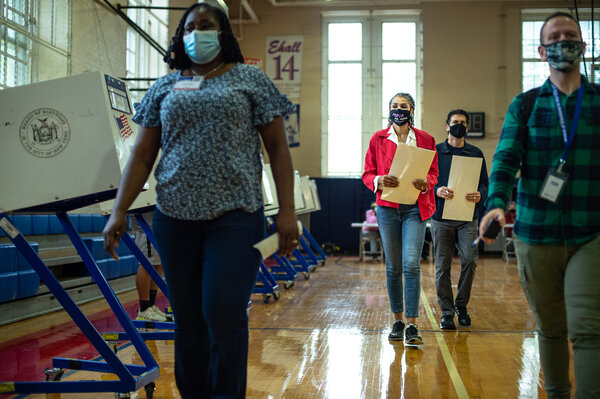 Ms. Wiley’s allies say that she has a clear lane to herself: She has emerged as the favorite of left-wing Democrats with a message focused on combating social and racial inequities.

Her challenge in the race is to build a coalition that is broad enough to win in a vast city that is not uniformly progressive, even in a Democratic primary. She is seeking to win over voters of color across the ideological spectrum as well as white progressives.

Mr. Adams, Mr. Yang and Ms. Garcia, along with Mr. McGuire, have often taken a more expansive view of the role of police in promoting public safety than Ms. Wiley has, and issues around criminal justice and combating crime have been central flash points in previous debates.

In a recent Spectrum News NY1/Ipsos poll, Mr. Adams had a lead on the question of which mayoral candidate is most trusted to handle issues of crime and public safety, and some of his opponents hope to undercut his standing on that subject.

“We want to be contrasting with the other candidates, especially with Eric Adams, but also talking about a safe New York and a positive vision for New York,” said Chris Coffey, Mr. Yang’s co-campaign manager.

Mr. Yang also said Tuesday he intended to focus on public safety. He has slipped in public polling amid scrutiny of his knowledge of municipal government, as well as voters’ growing focus on the importance of combating crime. The debate is an important, if imperfect, chance to make another pitch.

Mr. Yang this week also began airing negative advertisements on television against Mr. Adams, according to the ad tracking firm AdImpact — a move that could open the floodgates to a barrage of broader negative advertising.

Ms. Garcia on Monday suggested she intended to stay above the fray onstage, but she has also signaled she is increasingly willing to draw contrasts with Mr. Adams on questions of experience and ethics.

She is performing well in Manhattan, according to a new Marist poll and interviews with voters in neighborhoods like the vote-rich Upper West Side. But she must also diversify her coalition in the final stretch. And given her rise in the polls, she may find herself a target of criticism in the debate in a way that she has not previously experienced in the race, setting up an important test under public pressure.

Reflecting Ms. Garcia’s standing, Mr. Adams held an event this week focused on her record, in a possible preview of clashes to come.