Lily, a fuchsia Muppet with a mop of hair, green eyelids and a lavender nose, debuted on “Sesame Street” seven years ago. She was shy and soft-spoken. Her family, she explained to Elmo, did not have enough to eat.

At the time, Sesame Workshop, the nonprofit that produces “Sesame Street,” wanted to create a Muppet that could help illustrate the food insecurity that was affecting nearly 17 million households with children.

Now, Lily will reappear for the first time, as someone who is homeless. In the story line, her family is going back and forth between shelters, crashing with relatives and staying with Sofia, a real-life person who works at the local community center. 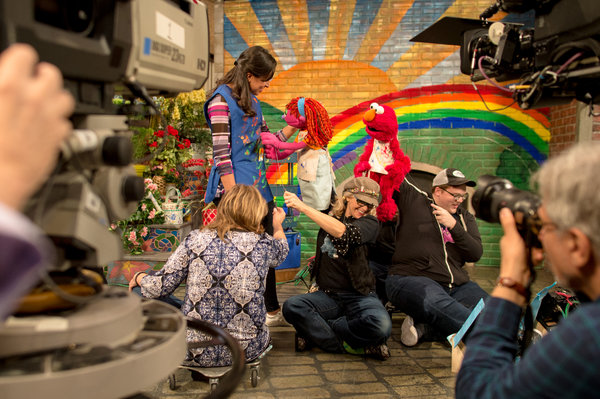 Lily’s dramatic return will be unveiled Wednesday on YouTube.

Sesame Workshop realized that the issue — 2.5 million children nationally are homeless — needed attention, said Jeanette Betancourt, senior vice president for U.S. Social Impact at Sesame Workshop. In New York City, where Sesame Street is set, one out of every 10 students was homeless during the past school year.

On “Sesame Street,” “homeless” is never uttered because of the stigma surrounding the word; on the show, “H” stands for hope, help, healing and home.

What You Will See

Sesame Workshop has produced several segments involving Lily’s story arc, including one where Elmo and Rosita interact with real-life children who are homeless.

The videos can be seen on YouTube and on a show-related website that has resource materials to help parents, teachers, social workers and others learn how to help children cope with homelessness.

A storybook, penned by the children’s author Kama Einhorn, shows Lily in a shelter comparing her situation to that of a baby bird whose nest has been destroyed.

Lily has not appeared on the show since her debut in the 2011 special that aired on PBS. Her recent plight is rooted in a realistic trajectory for many families who end up homeless: Food insecurity signaled instability, which led to homelessness.

Three videos follow Lily’s plight, from the revelation of her homelessness to getting an apartment. Leslie Carrara-Rudolph, the puppeteer behind Abby Cadabby, a regular on “Sesame Street,” brings Lily to life. Sofia is played by the actress Jasmine Romero.

Segment 1: Talking About It

Sesame Workshop created an educational program called Sesame Street in Communities, which aims to help parents, caregivers and others to improve the lives of children. The program has addressed topics like the incarceration of a parent, the death of a parent, nutrition and school preparedness.

But various people told Sesame Workshop that they needed to address childhood homelessness.

“Homelessness carries such a unique set of challenges and is such a unique circumstance of trauma for kids, affecting them in so many ways that other traumas do not. Their sense of physical safety, their sleeping, their access to school,” Ms. Einhorn said. “It’s such a pervasive trauma and it’s sustained.”

In one part of the segment, “A Rainbow Kind of Day,” Lily and Elmo are painting a mural of a rainbow. Suddenly, Lily, appearing sullen, walks away. Elmo asks Lily why she looks so sad, and then encourages her to open up.

“You know, Lily, sometimes, when Elmo talks about his feelings, it makes Elmo feel better,” he tells her.

Lily reluctantly reveals that she and her family are homeless.

“I do it whenever I feel worried or scared,” Sofia says. “Can I show you?”

She tells Lily to think of someone who loves her. Then, she makes dots out of the people Lily identifies. “What do you get when you connect all these dots?” Sofia asks.

She then draws a heart out of the dots. “All of these people love you and they are going to take care of you no matter where you are,” Sofia says.

In “Ribbons of Hope,” Lily’s family moves into an apartment and she tells Elmo that her mother made her bracelets out of ribbons. Touching them kept Lily calm during difficult times. She offers one to Elmo.

“Together, we got this,” she says.

The ribbons were comforting for Lily, said Ms. Einhorn, who also works as senior content manager at Sesame Workshop. In talking to parents and providers, she remembered hearing from a mother that she would take a car freshener, like the one hung on a rearview mirror, to each place her family stayed to create a sense of continuity through smell. The tactic is included in a list of tips for parents that’s linked to the video series and storybook.

A group of experts on children and homelessness helped the Sesame Workshop develop the scripts and materials. Sesame also talked to six groups of homeless and formerly homeless parents and also with providers of homeless services in New York and Pennsylvania.

Real-life children who see themselves in Lily

In this segment with Elmo and Rosita, real-life children discuss what “home” means.

“I think home is to me a special place that I would like to live every single day,” Darinys Nueves, an 8-year-old currently living in shelter, says at the end of the segment.

Aleida Romero, her mother, said in an interview that they were living doubled up with another family in a Brooklyn apartment but were kicked out after a dispute.

Ms. Romero, 41, was diagnosed with cancer soon after the family moved into a shelter. She said she had to quit her job as a medical assistant while undergoing treatment and is now taking classes to become a nurse.

She said she hoped these Sesame Workshop segments can change public perception of homelessness. “I want people to think differently about us. People bully my daughter because she lives in the shelter,” Ms. Romero said.

Darinys chimed in, “People should not be rude to other people just because they have other stuff.”

On Wednesday, segments will be uploaded to YouTube and on the Sesame Street in Communities website. On Thursday, people can watch a panel discussion about the topic on Facebook Live and YouTube Live at 4 p.m.

“Children who experience homelessness, there’s an invisibility with that, an isolation,” she said in an interview. “To see your experience in a puppet, it’s tremendously normalizing and validating.”

Nikita Stewart covers social services with a focus on New York City Hall. She has previously worked at The Washington Post, The Star-Ledger in New Jersey, The Journal News in Westchester County and The Courier-Journal in Louisville, Ky. @kitastew

Woman chokes bouncer after assuming he touched her