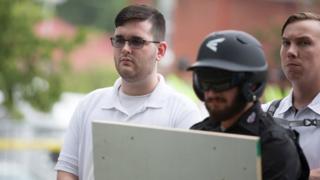 A picture has been emerging of the main suspect in the killing of a woman near a white supremacist rally in Charlottesville, Virginia, on Saturday.

James Alex Fields Jnr, who is 20 years old and originally from Kentucky, was arrested and charged after a car was deliberately driven into a crowd of anti-fascism protesters.

His mother told local media that he did not openly express extreme views.

But evidence is emerging of a “very misguided and disillusioned” young man. 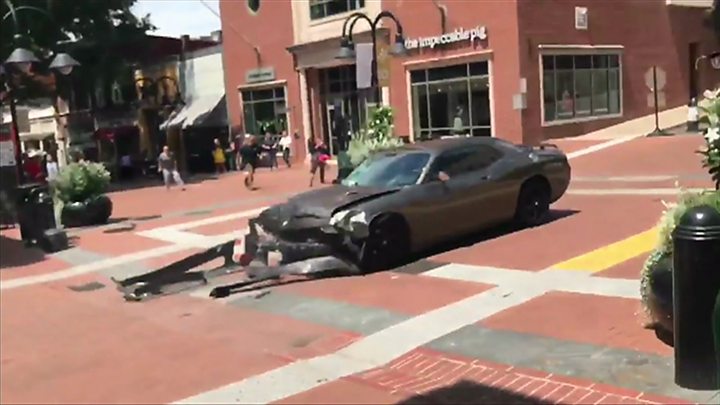 Mr Fields’ former teacher characterised him as such to the Cincinnati Enquirer, and said his high school research made it clear he had beliefs that were “very much along the lines of the neo-Nazi movement”.

“A lot of boys get interested in the Germans and Nazis because they’re interested in World War II. But James took it to another level.”

His mother, Samantha Bloom, had not yet been contacted by authorities when reporters informed her of her son’s arrest.

She told journalists that she and her son had moved from Kentucky to Maumuee, Ohio, a few years ago for her job.

Mrs Bloom, who is paraplegic, said that her son moved out of her home “five or six months ago”, and that she had been watching his cat while he was in Virginia.

She said she did not know the nature of the event he was attending, telling reporters: “I try to stay out of his political views… I don’t get too involved.”

“I thought it had something to do with [US President] Trump.”

“I told him to be careful,” Mrs Bloom said she advised her son before he departed, adding “if they’re going to rally to make sure he’s doing it peacefully.”

Mr Field’s father was killed by a drink driver months before he was born, his uncle told the Washington Post, adding that he had left money in a trust for his child to access when he turned 18.

“When he turned 18, he demanded his money, and that was the last I had any contact with him,” the uncle said.

During a brief court appearance on Monday, he told a judge that he could not afford to hire a lawyer, and identified his employers as Securitas and Ohio Omni.

The Toledo Blade reports that in June he was found guilty of “having expired or unlawful licence plates” on his Dodge Challenger.

The newspaper also reports that while living in Florence, Kentucky, his mother called 911 at least nine times “to say she was fearful of and needed help with her sometimes violent son”.

According to “calls for service” records provided by the Florence Police Department to the Associated Press, Mrs Bloom said her son had stood behind her wheelchair wielding a long kitchen knife, and had hit her and locked her in a washroom after she told him to stop playing video games.

She also told officers that her son was on medication to help control his temper.

After enlisting in the military, Mr Fields was released in December 2015 for “failing to make training standards”, the military confirmed.

Buzzfeed reports that a now deleted Facebook account appearing to belong to him had overt references to Nazism and a “Make America Great again” banner.

It also had a photograph of the 20-year-old posing with a car resembling the one used in the attack and a variety of memes popular with white supremacists and neo-nazis who have coalesced under the banner of the so-called “alt-right”, including Pepe the Frog.

He was pictured at the event (second from left, above) carrying a shield with the logo of an openly fascist group: Vanguard America.

The group’s website declares “America is under attack” and says: “If current trends continue, White Americans will be a minority in the nation they built. It’s time to take a stand.”

They released a statement on Twitter denying James Fields had been a member.

He has been charged with one count of second-degree murder, three counts of malicious wounding and one count of failing to stop after a hit and run.

Republican Senator Ted Cruz called on the Department of Justice to prosecute the suspect for domestic terrorism.

The FBI confirmed they had opened a civil rights investigation into the incident.