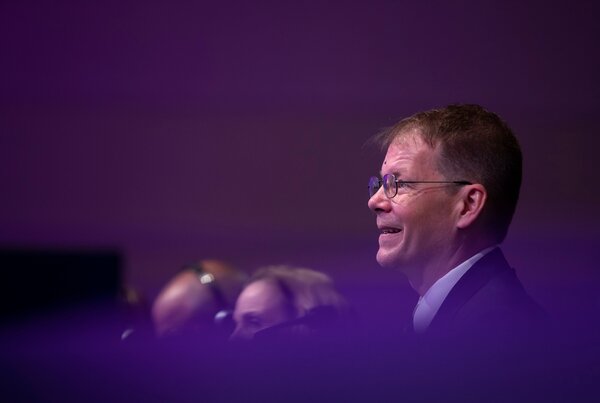 Judging by his résumé, Jacques A. Bailly is eminently qualified to serve as the official pronouncer of the Scripps National Spelling Bee, a job he has held since 2003,

He won the bee in 1980 when he was 14. He received a Ph.D. from Cornell University in ancient philosophy and wrote a dissertation on a pseudo-Platonic dialogue called the Theages.

He is a professor of Greek and Latin at the University of Vermont and teaches courses on Plato, Aristotle and etymology. He said he is now learning Old Norse and Sanskrit and likes to garden and “hoard wood.”

But asked how he got the job at the bee, he said simply: “because they asked me.”

Dr. Jacques Bailly has become a fixture at the Bee as our pronouncer. This is his 18th year in this role and his 12th year as associate pronouncer. His history with the Bee goes back further than that though. He was the 1980 #SpellingBee champion! 🏆 #TheBeeIsBack pic.twitter.com/7nT4ESRZYg

Professor Bailly, 55, who projects a calm demeanor onstage and speaks in an even, avuncular tone, shuns showmanship and game show antics.

He said he understands that the bee is as much a media and public relations event as it is a spelling competition, but he believes that the spellers should also avoid trying to become the center of attention.

Even in the face of the most adorable speller, Professor Bailly remains collected. He never patronizes. He never coos.

When a speller sing-songed, “Howdy, Dr. Bailly,” during the 2016 spelling bee, the pronouncer did not take the bait.

He said he does not worry about the long-term effects of losing on the children.

“I understand that they think it’s tremendously important and they might cry and all that,” Professor Bailly said. “But I don’t think in the long run that this is going to hurt them. I don’t see any cruelty. I don’t see any meanness.”

As for the winner, victory should not feel like such a seminal event, said Professor Bailly, who has a son, 17, and a daughter, 19.

The winners “are representative of the other spellers who worked really hard,” he said. “Every single one of them that I’ve ever talked to has a very strong sense of humility and said it could have been anyone else.”

When he competed, he recalled how hot and exhausted he felt onstage and “the feeling, as each word was given, of ‘oh, I know that’ or ‘thank goodness I didn’t get that word.’”

When he won, he was relieved that it was finally over.

“I could finally do something other than sit there in the hot TV lights,” he said.

He said: “I will do it as long as they keep asking me.”

James Murdoch resigns from News Corp board over editorial differences