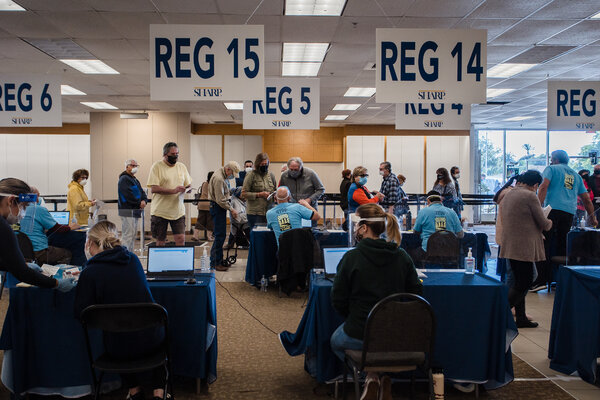 California’s coronavirus vaccine rollout has continued to be a source of confusion, even as thousands of Californians join the ranks of the inoculated. (As of Sunday, about 38.3 million people in the United States had gotten at least one shot.)

In recent days, state officials have unveiled a flurry of new efforts aimed at better tracking vaccination efforts and school reopenings, announced a change to eligibility requirements, and — after weeks of promising they would — detailed an agreement with Blue Shield of California to be what the state describes as a “third-party administrator” of its vaccination campaign.

Here’s what to know today:

Who’s eligible for the vaccine now?

Over the last couple of weeks, Gov. Gavin Newsom and other state officials have repeatedly emphasized that the biggest hurdle to vaccination at the moment is a limited and unpredictable supply. (Los Angeles was forced to temporarily shut down five vaccination sites over the weekend because it was facing a shortage of doses.)

[Track the vaccine rollout in California compared to other states.]

In order to speed up distribution, the state essentially switched from a strict tiered system prioritizing certain essential workers to one based more in broad age categories.

Last month, the state opened up eligibility to anyone 65 and older, in addition to those working in certain essential jobs.

But on Friday, in response to widespread concern and outcry from activists, state officials announced that, starting on March 15, people age 16 to 64 with disabilities or severe underlying conditions that put them at high risk if they contract Covid-19 will also be eligible to be inoculated.

“I want the disability community to know, we’ve heard you, and we’re going to do more and better to provide access, even with the scarcity” of vaccines, Mr. Newsom said Friday, visiting a mass vaccination site at Moscone Center in San Francisco.

[Read more about the eligibility change.]

Depending on availability of the vaccine, the following groups are eligible to get vaccinated: health care workers, nursing home residents and staff, workers in food and agriculture, educators and child care providers, emergency services workers, and Californians 65 and older.

How will Blue Shield of California change the vaccine rollout?

On Monday, state officials finally revealed details of a deal with Blue Shield of California aimed at speeding up a vaccination rollout that experts said has been hamstrung by its reliance on already-overwhelmed local public health departments.

State leaders have also said for months that equity — ensuring that members of disproportionately hurt communities are at the front of the line — would be a top consideration.

But recently released demographic data suggests those efforts haven’t yielded results; while California’s Latino communities have been devastated by the virus, accounting for 61 percent of cases statewide, just 16 percent of people who have been inoculated and whose ethnicity was reported were Latino, according to the state.

The Blue Shield partnership is aimed at fixing that, too.

Blue Shield will come up with an algorithm to allocate vaccine doses directly to health care providers and an algorithm to prioritize appointments at vaccination sites, both of which should account for equity. The company — which is not allowed to turn a profit off the deal, only cover costs — will also propose a system of financial incentives for providers who move quickly and meet equity goals.

By the time the effort is up and running, 95 percent of people should be within 30 minutes of a vaccine in urban areas and within 60 minutes in rural areas.

How are school reopenings going?

They’re still fraught by imbalances between rural and urban areas, and between private and public schools, as CalMatters reported. But you can find a lot more information about which schools are open on the state’s new site, schools.covid19.ca.gov.

Palo Alto Unified School District middle school and high school students could return to classrooms as soon as March 1, making the district one of the first in the Bay Area to plan to reopen. [The Mercury News]

Some school districts are hoping that testing kids for the coronavirus before they arrive on campuses could allow them to return safely. [KQED]

As the pandemic has worn on and the nation’s unemployment benefit agencies amass huge backlogs, Reddit has become an unofficial hotline. [The New York Times]

The New Jalisco bar in downtown Los Angeles had for decades been a home for the marginalized of the marginalized: queer Latinos. It, like so many gay bars, has been struggling to survive the pandemic. And then there’s gentrification. [The Los Angeles Times]

Let Us Help You Better Understand the Coronavirus

What Biden’s Win Could Mean for New York: 5 Takeaways