Home » Americas » Why Do We Still Have ‘Girl Stuff’ and ‘Boy Stuff’?

“It’s not enough to give your daughter a truck.”

— Lisa Selin Davis, the author of “Tomboy,” on the sexism and homophobia behind gendering kids’ lives

In 1858, the author of a widely reprinted editorial — “Our Daughters — Tomboys”— pondered how an aimless life, a delicate nervous system, enfeebled health and restricted physical education could bring out the best in girls if those same things were not calculated to bring out the best in boys.

Yet, a century and a half later, gendered approaches to raising girls versus boys are still very much alive.

The word tomboy, which has been around since at least 1556, illuminates the way our culture has divided childhood with certain skills and traits defined as masculine or feminine.

But the term is a zombie, argues Lisa Selin Davis, author of “Tomboy,” a book about how children’s exploration is stymied by gender norms. No matter how often the word has been declared passé, it hasn’t quite died because the thinking behind it is everywhere.

When boys want to play princess and wear dresses, Diane Ehrensaft, director of mental health at the Child and Adolescent Gender Center at the University of California, San Francisco, says parents come to her asking, “What’s wrong with that little boy?” She hears, “Oh, that’s a trans girl.” Before that, it was, “He must be gay.” Actually, Ms. Ehrensaft said, “All we know is, it’s a boy in a dress.”

Tomboys have shown us that girls being less “girly” are historically “acceptable,” if not celebrated. Whereas the tomboy’s counterpart, the “sissy,” carries the homophobic and misogynistic warning to boys: Don’t be like a girl.

Ms. Davis spoke with In Her Words about the complex history of the tomboy, and what parents, educators and pediatricians can do to resist gendering childhood.

Our conversation has been condensed and edited for clarity.

Your book argues that American childhood is more gendered now than in recent generations. How so?

In the 1970s, U.S. feminism permeated consumer culture, and masculine styles were marketed to girls. The Sears catalog had boys-to-girls conversion charts. There was the message that girls should have access to boys’ worlds.

But there was no equivalent message for boys?

Never. These gender messages are about making sure the kids are straight. It’s been marvelous as a social control and for selling things. Not so much for children’s psychological development and health.

How did products become so gendered?

After the 1970s, prenatal sex testing, a recession and a decline in the birthrate put the pressure on marketers to find a way to sell two of everything. Anti-feminist backlash in the Reagan era returned people to traditional values, which brought in the ’90s “girl power” era.

What’s the long-term impact of having different stuff for boys and girls?

The more you segregate toys, the more you develop different skill sets and funnel them into different ways of being in the world. Girls’ clothes, for example, aren’t made for climbing and sports.

How does the “pink/blue divide” play out?

By age 3, kids are trying to perfect the stereotypes they’ve learned. When you show kids counter-stereotypes, when you tell them that cars are for girls, girls like cars. Most kids like what they think they’re supposed to like.

For decades in America, pink was a boy’s color. What’s another example of the absurdity of gendering?

In the 19th century, most boys played with dolls. So many that we made “boy dolls” — action figures.

One of the most famous tomboy images is a 1981 ad of a girl in a striped T-shirt holding a Lego creation. What she’s wearing in the ad is her own outfit. 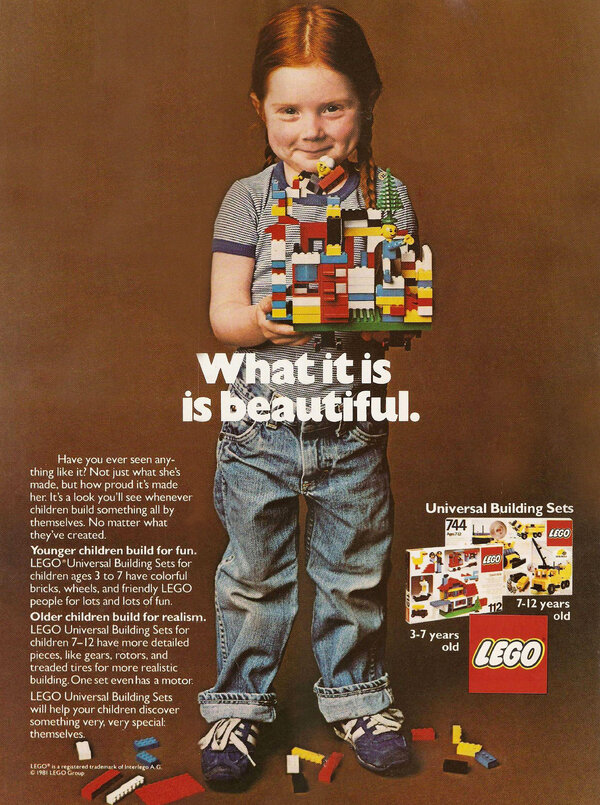 But now we have “girl” Legos …

How is the embrace of tomboys linked to misogyny?

The message that girls should have access to boyhood came with a disdain for whatever’s marked as feminine. When kids say, “I hate pink,” what they’re saying is, “I hate what’s associated with girls.” Girls learn the gender hierarchy and start pushing this stuff away to make them seem cooler. By 6, they’re internalizing sexism.

Does “tomboy” exist in other languages?

Yes, more than 40 non-English languages have their own version. “Wildfang” in German, “garçon manqué” in French, “erkek fatma” in Turkish.

Tell me a bit more about how the tomboy label was used.

It was a label that calmed people when girls were not behaving as expected. And it was incredibly liberating for many girls, but that liberation had a time stamp. It had to end at puberty. What people remember most is the heartbreaking conversation with their mother who said, “You have to wear a shirt now.” If they said, “No, I’m a boy,” they’d hear: “That’s a phase. You’re a girl.” Very few got the message that they don’t have to change. For some, “tomboy” was an invalidation of who they were.

This is essentially “tomboy taming” — the idea that tomboys will eventually feminize and go on to marry men, right?

In the 19th century, the whole point of tomboyhood was to have a “healthy girl” who would then surrender her tomboyness at puberty to procreate and become a “proper woman.”

A wife and mother?

Historically, the word switched back and forth between describing kids and adults, and girls and boys, right?

It went from being about boys who were extra boisterous to being about women with a hearty sexual appetite “like a man’s,” then back to the domain of children again — to refer to kids who were assigned female at birth and were gender nonconforming, or, in other words, who were not stereotypically feminine.

When did the tomboy-lesbian cliché emerge?

It appeared in 1950s pulp fiction, because there’s an early gay liberation movement. Adult tomboys were represented as butch. Today on Facebook there are dozens of tomboy groups in many Asian countries, dedicated to a kind of butch lesbian sexuality or expression, and sometimes a trans identity.

You mentioned a surprising recent change in Britain …

You can no longer use gender stereotypes in ads.

It’s mainly a niche market of “girlish” clothes for boys, but it’s growing.

Is seeing ambiguity as legitimate also a big part of what needs to happen?

Yes. It’s incredibly important for children to see “masculine” girls and women and “feminine” boys and men, and to know that the qualities we’ve labeled that way aren’t rooted in sex.

In your book, you mention some former “tomboy” advantages …

Yes. I interviewed people from different economic backgrounds, races, genders, sexualities. The one commonality that carried through to adulthood was a kind of comfort with themselves that I think comes from being socialized with or as boys — an adjacent privilege. Some trans adults had a much rougher time as kids, but most were very confident. Research shows that kids who don’t adhere to gender norms tend to do better academically, are more flexible and more accepting of others’ differences.

When I interviewed kids who identified as nonbinary, that word gave them the freedom that tomboy label used to give kids — without the expiration date.

Is it enough to expand categories or should we retire gender?

That’s the million-dollar question. One solution has been to come up with more categories. Is that liberating? To some. Is it limiting? To others.

I don’t see gender nonconforming as an identity, I see it as a set of behaviors not hued to stereotypes. If we stop falsely labeling traits masculine and feminine and embrace ambiguity, there would be a lot less distress.

Are we capable of that?

Once people had a hard time believing girls could whistle. But we got over it.

Mary Katharine Tramontana is a writer based in Berlin, covering culture and sexual politics. Write to us at [email protected]. In Her Words is available as a newsletter. Sign up here to get it delivered to your inbox.

Fourth of July: US Independence, and a 'show of a lifetime'