Home » Americas » Why Is California All Over the College Admissions Scandal?

The college admissions fraud scandal that erupted Tuesday captivated the country — unsurprisingly, given how it hit straight at the heart of intersecting debates about class, wealth and privilege, and how thoroughly it seemed to lay waste to myths about American academia as a meritocracy.

Dozens of people were charged in a scheme that involved wealthy parents paying bribes to get their children into elite universities, like Wake Forest, Yale, Stanford, U.S.C. and U.C.L.A.

Also accused were top coaches whom federal prosecutors said accepted millions of dollars in exchange for help getting the students “recruited” as athletes, even if they didn’t play sports.

You can read more about the case — the Justice Department’s largest ever college admissions prosecution — here, in this story by my colleagues Jennifer Medina, Katie Benner and Kate Taylor.

And you can read up on how the alleged scheme worked, according to court documents, in this explainer.

What struck me about the case was the involvement of many parents and participants from California.

The actresses Felicity Huffman and Lori Loughlin, as well as Ms. Loughlin’s husband, the designer Mossimo Giannulli, all of Los Angeles, were among the parents accused. So were financiers from ritzy Bay Area suburbs, a vineyard owner from San Francisco and executives from coastal Orange County.

Decorated water polo and soccer coaches at California schools have been fired or placed on leave since the news broke.

And the man at the center of it all, William Singer, ran his business from Newport Beach, after working as a college counselor in Sacramento.

So what is it about the Golden State that allegedly fueled this kind of scheme?

I asked Jerome Karabel, a U.C. Berkeley sociologist who has written extensively about college admissions.

On a broad level, he told me, the case reveals a fundamental “crisis” in American society.

“California is an epicenter of enormous wealth,” he said. “And basically where you have major concentrations of wealth, you have the possibility of corruption.”

Mr. Karabel said that the alleged scheme appeared to stem less from the parents’ desire to make sure their children learn than from “parental anxiety” in a society in which being rich is the best way to stay rich, and if you fall, there’s less of a safety net.

In other words, he said, “The costs of failure are higher and the rewards of success are also higher.”

Still, I talked to Doug Haynes, vice provost for Academic Equity, Diversity and Inclusion at U.C. Irvine, and he emphasized that thousands of first-generation college students are getting world-class educations at California’s public universities in particular.

The scandal, he said, is troubling in large part because it erodes students’ trust in those institutions.

“They put their faith in the university to provide clear criteria and confidence in an admissions process that is based on their past achievements and future promise,” Mr. Haynes said. “I think that bond, that trust is so important because it helps distinguish us from other higher education systems in the world.” 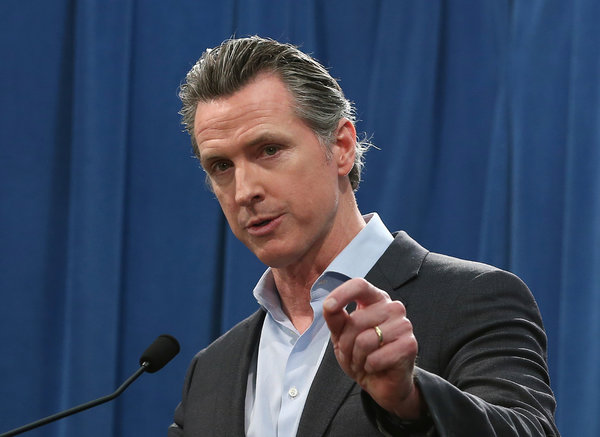 • After some soul searching, Gov. Gavin Newsom will put a moratorium on the death penalty today. “I do not believe that a civilized society can claim to be a leader in the world as long as its government continues to sanction the premeditated and discriminatory execution of its people,” he’s set to say. [The New York Times]

• The Trump administration plans to shutter many of its overseas immigration operations. Experts say the move will be a blow to some seeking to migrate legally, as well as to Americans who adopt children internationally and refugees. [The New York Times]

• Lawmakers grilled the chief executive of Wells Fargo, who told them that it’s a better bank than it was three years ago, when it was rocked by scandal. But House members, including the new California representative Katie Porter, didn’t buy it. [The New York Times]

• And if you missed it, Congress members cited recent reporting by The Times that Wells Fargo’s aggressive sales culture hasn’t really changed, according to some employees. [The New York Times]

• The boyfriend of Trinity Love Jones’s mother has been charged with the girl’s murder. [The Los Angeles Times]

• Pacific Gas & Electric won’t face criminal prosecution in counties, including Sonoma and Napa, that were hardest hit by fires in 2017. [The San Francisco Chronicle]

• Consultants for a toll authority in Orange County got paid $185 an hour to read transportation news. That’s part of a multimillion dollar public outreach campaign for extending the Highway 241 toll road, which is now drawing scrutiny. [The Los Angeles Times]

• The authorities are encouraging livestock owners to be vigilant amid a rash of goat thefts in Fresno County. Some of the victims have been 4-H students. [The Fresno Bee]

• Has the pink restaurant trend run its course? Is monochrome the new pink? [Eater]

• Lorely Rodriguez is the Honduran-American singer from East Los Angeles who goes by the name “Empress of.” She talked about how growing up there influenced her music. [Los Angeles Magazine]

On Monday, this newsletter was all about wildflowers — a profusion of them springing forth in Southern California’s desert lands. Today, the story is butterflies. Millions of them, as Curbed Los Angeles reported.

The rains that have spurred the wildflower blooms have also contributed to a Painted Lady butterfly breeding bonanza, according to The Los Angeles Times. And while the insects make a long trek north — from the deserts of southeastern California and Mexico through California and up to Oregon and Washington — annually, their numbers have been declining in recent years.

So this year’s robust population is a welcome sight for entomologists.