Weather: Brace for what should be the hottest day of the week. It’ll be mostly sunny and in the 90s, with a chance of thunderstorms into the evening. 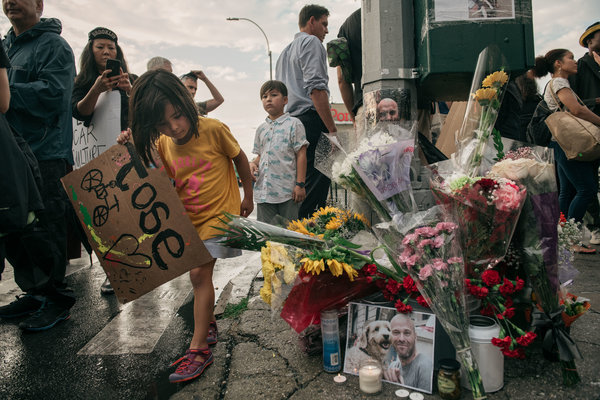 Tragically, that has come with a danger: Nineteen cyclists have been killed in New York City this year — nearly twice the number killed in 2018.

But so far this year, only two motorists are facing criminal charges.

[Read more about cyclist deaths in New York City: Are they accidents or crimes?]

In June, Treasure Liggins was driving at East 105 Street and Avenue D in Brownsville, Brooklyn, when she lost control of her 2007 Infiniti and fatally struck a man on a bike, according to court documents and news reports.

The man was identified as Mohammed Abdullah, 29. Mr. Abdullah was on an electric bike at the time, the Brooklyn district attorney’s office said.

Ms. Liggins, 22, was charged with multiple counts, including second-degree manslaughter, vehicular manslaughter and criminally negligent homicide. She was intoxicated at the time of the incident, according to court papers.

The second driver was charged yesterday

Ten days ago, in footage caught on dashboard cameras, he ran a red light and T-boned an S.U.V., sending it spinning across the street. A cyclist, José Alzorriz, had just pulled up to a red light when the S.U.V. struck him.

According to my colleague Kimiko de Freytas-Tamura, Mr. Alzorriz had texted a friend about the challenges of biking in the city just days before the fatal crash.

But not all crashes lead to charges

Drivers are rarely criminally charged for fatalities unless there are extenuating circumstances, prosecutors and defense lawyers told Ms. de Freytas-Tamura.

Motorists are more likely to be charged if they were under the influence of alcohol or drugs; purposefully intended to harm someone; or were aware of the risk or the harm and ignored it.

It’s also rare for these cases to reach trial, in part because it is hard to prove what judges call the rule of two: There must be evidence of egregious behavior, and prosecutors must prove the driver violated at least two traffic laws.

Some lawmakers are pushing legislation and plans that they say could help make New York City streets safer for cyclists. Among them:

Mayor de Blasio, who called for Mr. Baig to face “serious” charges, has deemed the spate of cyclists deaths an “emergency.” He has proposed a $58.4 million bicycle plan to build 30 miles of secure bike lanes over five years.

City Councilman Brad Lander of Brooklyn has sponsored a bill that would seize vehicles that get at least five red-light or speed-camera violations in one year. Mr. Lander said this would remove 25,000 drivers from the road until they completed a safety course.

State Senator Andrew Gounardes of Brooklyn introduced a proposal that would terminate the license of anyone with at least three moving violations in a year.

An official with the Brooklyn district attorney’s office cited a proposal to require trucks to have safety netting that would prevent cyclists from falling under the wheels.

Mayor de Blasio was on a videoconference call with the Iowa Federation of Labor Convention yesterday, hitting the usual talking points of fighting for working people. But something wasn’t quite right.

The mayor’s voice sounded as if he had just sucked the helium out of a balloon.

Videos of Mr. de Blasio’s remarks began spreading around social media. Chuckles from onlookers could be heard in the background.

The incident was the latest hiccup in Mr. de Blasio’s struggling presidential campaign. The mayor is at the bottom of the polls and fund-raising totals.

Dave Weigel, a reporter for The Washington Post, wrote on Twitter that the video feed was “hilariously and unfortunately” distorting the mayor’s “voice by making it sound higher.”

Olivia Lapeyrolerie, a spokeswoman for Mr. de Blasio’s campaign, said he was doing a live feed from New York because his flight to Iowa had been canceled because of bad weather.

“It was obviously a technical glitch,” Ms. Lapeyrolerie said.

The campaign blamed the glitch on the organizer and said it had used the same computer during an earlier dry run. It was also working with the organizer to share a normal-sounding version on social media.

Mr. de Blasio, who was due to travel to New Hampshire later in the day, took to Twitter to address the situation.

“If a high-pitched voice is what it takes to spread a message about putting working people first, pass the mic and I’ll try my best chipmunk impression,” he wrote.

Five people were killed in one day of shootings in New York City.

While it’s still summer, set sail on the Hudson River.

A Jet Blue logo was temporarily added to the Pepsi-Cola sign that stands along the East River in Queens. [New York Post]

The Westchester County house that Sandra Lee shared with Governor Cuomo is for sale. The price was just cut by $300,000. [lohud.com]

Undocumented immigrants no longer need a social security number or a tax ID number to be eligible for the affordable-housing lottery. [NY1]

Learn to square dance with the WNYC program Radiolab at the Bell House in Brooklyn. 8 p.m. [$20]

Children can discover their inner baker with a “Descendants”-themed cookie and cupcake decorating workshop at Cutest Cookies on Staten Island. 4 p.m. [$20]

View a performance by the Balinese gamelan and dance group Gamelan Dharma Swara at Wave Hill in the Bronx. 7 p.m. [$12]

And finally: What to do this week at the U.S. Open

The United States Open’s Fan Week runs through tomorrow at the U.S.T.A. Billie Jean King National Tennis Center in Queens. My colleague Naila-Jean Meyers compiled some of the activities on the schedule.

The events are free, but note: “Those Fuku fried chicken sandwiches and Honey Deuces, though, you’ll have to pay for,” Ms. Meyers said.

The qualifying tournament runs through tomorrow. Matches begin at 11 a.m.

Legends matches are at the Grandstand through tomorrow. They start at 4:30 p.m.

Who will play Serena Williams and Roger Federer in the first round? Attend the draw ceremony today at noon.

Today at 6:30 p.m., celebrate the first official pride event to be held at a Fan Week.

Listen to the stars at media day. News conferences start tomorrow at 11 a.m.

The tournament begins in earnest on Monday.

See more details about the activities and read more about the tennis in The Times’s Sports section.

First man: Are you going to Budapest?

Second man: I am going to Budapest because I have a ticket.

Andrea Salcedo is a reporter on the Metro desk. She was selected as one of the fellows for the Times inaugural class. She graduated from Columbia University and Columbia College Chicago.  @salcedonews