Home » Americas » Why Some Orthodox Jewish Women Won’t Get Vaccinated

In April, rumors began swirling in various New York City neighborhoods with large Orthodox Jewish communities about how the coronavirus vaccine could pose a serious threat to women’s fertility.

On WhatsApp groups, recordings of rabbis warning against what they said were the vaccine’s adverse effects proliferated quickly among the growing networks for the mothers of teenage girls who don’t want their daughters vaccinated.

Miriam Tewel, an 18-year-old from the Crown Heights neighborhood of Brooklyn, said the rumors influenced her decision not to go to Israel for a one-year stay at a seminary in Jerusalem because it required a vaccination.

“Anything that could compromise my future as a mother is not worth the risk,” said Ms. Tewel, 18, who is the youngest of 11 children.

Many of Ms. Tewel’s friend are consulting about the decision with their rabbis, who have a large say in what happens in the community and have been making recommendations on a case-by-case basis. But Ms. Tewel has already made up her mind.

Many prominent mainstream Orthodox leaders in the New York region and in Israel, where the virus has all but disappeared, have advised their communities to get the coronavirus vaccine.

But in ultra-Orthodox circles in New York, where women marry at a younger age and birthrates dwarf those of the general population, the spread of unsubstantiated rumors about the coronavirus vaccine’s potential adverse effects on fertility and pregnancy have been particularly effective in dissuading young women from getting the vaccine, interviews with health officials and community members show. These neighborhoods have some of the lowest vaccination rates in New York City.

Misinformation campaigns in these communities during the pandemic led to a resistance to restrictions and guidelines that at times caused a surge of virus cases.

A concern for officials is that a resistance to the vaccine in Orthodox neighborhoods could play a part in endangering the city’s long-term prospects for a health and economic recovery.

While vaccine hesitancy has been seen in many Latino and Black neighborhoods in the city, the resistance in ultra-Orthodox neighborhoods may be more difficult to combat because of the insular nature of the community, according to community activists and health department officials.

“Fears about the vaccine and fertility have caught on in the Orthodox community like wildfire,” said Dr. Bat-Sheva Lerner Maslow, a reproductive endocrinologist and founding board member of Jewish Orthodox Women’s Medical Association, or JOWMA, a grass-roots group that has taken the lead on combating misinformation about the coronavirus vaccine circulating in Orthodox circles.

Esther Ita Holt, a 33-year-old Orthodox mother of three who is several months pregnant, said she was bullied on a WhatsApp group intended to provide support to Orthodox Jewish mothers when she posted a recently published study indicating that vaccines are safe.

One group member accused her of spreading rumors that could threaten the lives of pregnant women and infants. Ms. Holt, who said she already faces vaccine skepticism within her own immediate family, decided to leave the group.

Miriam Leah Zisman, a 23-year-old Orthodox sales associate who is expecting her first child, said the conversations in her community about the possible dangers of the vaccine discouraged her from getting vaccinated.

“I come from a home where we vaccinate,” said Ms. Zisman, who is from the Midwood area of Brooklyn. “We believe in science and medicine.” Still, when it comes to her pregnancy and future fertility, the unknowns about the vaccine loom too large, she said. “I’m going to wait it out.”

New York City will spend as much as $60 million, according to one estimate by health officials, on a vaccine outreach program to combat hesitancy and access issues. But in many Orthodox neighborhoods messages from respected rabbis resonate more.

In Israel, where coronavirus restrictions have ceased now that the majority of the population has been vaccinated, state officials confronted similar difficulties with the ultra-Orthodox community. However, representatives from within the community waged an effective counter-messaging campaign.

But those messages have not been as successful in New York.

Patrick Gallahue, a spokesman for the city’s Department of Health, said the agency has been running ads in local Orthodox media, been working with community-based organizations to host additional pop-up vaccination sites and has partnered with trusted organizations like Hatzalah, an Orthodox volunteer-run ambulance corps, to educate community members.

Other organizations in the region have made similar efforts.

John Lyon, a spokesman for the Rockland County health department, said fertility has been the major issue of concern among ultra-Orthodox residents when it comes to receiving the coronavirus vaccine. Rockland County, home to 90,000 ultra-Orthodox Jews, was hit particularly hard by the virus last year.

Mr. Lyon said the department is “working through the delicate and personal process” of answering fertility-related questions by partnering with local health providers and sending envoys to community rabbis, who have the best chance of affecting community outcomes.

Recently, the group hosted a teleconference about the vaccine focused toward the Yiddish-speaking ultra-Orthodox population and a webinar for the mothers of adolescents who were particularly concerned about vaccinating their daughters.

“We’re using every method of communication we can to let members of our community know that the vaccine is safe,” said Dr. Miriam Knoll, a radiation oncologist and member of JOWMA’s coronavirus vaccine education task force.

“The idea that Orthodox Jews don’t vaccinate is just patently false,” Dr. Knoll added. “We absolutely do, and there are countless Orthodox rabbis who would say it is a religious obligation to vaccinate.”

From pamphlets and posters to a hotline and robocalls recorded in Yiddish — a method anti-vaccine activists within the community have also found particularly effective — the group is using the “machinery we already had in place after the measles crisis” to target the vaccine hesitant, said Dr. Knoll. 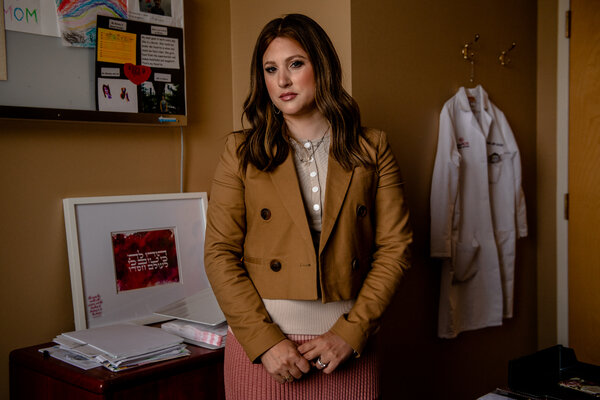 In the spring of 2019, aggressive anti-vaccination rhetoric contributed to the worst outbreak of measles in New York since 1992, with thousands of cases emerging in Orthodox neighborhoods in Brooklyn and Rockland County. Now, communication networks set in motion in 2019 to disseminate misinformation about the measles vaccine are being rebooted to dissuade community members from taking the coronavirus vaccine.

Rabbi Michoel Green, a Hasidic rabbi based in Massachusetts who was disowned from his movement in February for a series of aggressive social media posts railing against pandemic-related lockdowns and mask mandates, recorded a number of widely distributed robocalls warning ultra-Orthodox community members against receiving the coronavirus vaccine.

The voice messages — which Rabbi Green said he tweaked to cater to different ultra-Orthodox communities in Crown Heights, Borough Park and Williamsburg in Brooklyn and in Lakewood, N.J. — were forwarded to “thousands” of cellphone numbers previously collected by anti-vaccine advocates in 2019.

“When the rabbinical establishment starts to walk in lockstep with the government, that’s very concerning,” Rabbi Green said in an interview. A father of 12, Green said he “hopes and prays” that his eldest daughter does not get the shot, though he remains uncertain of what she will do.

Rabbi Green’s twin brother, Rabbi Daniel Green, a Hasidic rabbi who lives in Crown Heights, directs efforts to resist the vaccine in New York City. He recently stepped down from his teaching position at a local seminary for post-high school Hasidic women because the school hosted a clinic to administer the coronavirus vaccine earlier this month.

The Green brothers believe that Jewish law forbids someone to expose him or herself to an “experimental” vaccine, with those of childbearing age poised to lose the most.

Over the past few weeks, Rabbi Daniel Green, the father of 13, said he became particularly vigilant to warn his students, most of whom are single young women in their late teens and early 20s, against what he fears is the vaccine’s negative effect on fertility.

“I tell them it is especially dangerous for young people who want to have children,” he said, speaking between classes in which he instructs women in Halakha, the intricacies of Orthodox Jewish law.

The messages appear to have been at least somewhat effective.

Miriam Schwarzschild, a Brooklyn-based midwife who works with the ultra-Orthodox community, said several of her clients had been upset that she had gotten vaccinated.

“Many of them felt betrayed,” she said. “It’s taken me many years to build up trust within this community, and I think my choice to get the vaccine set me back. For many, the vaccine is a bridge too far.”

Dean & DeLuca, Barneys and the Fate of Bohemian Consumerism