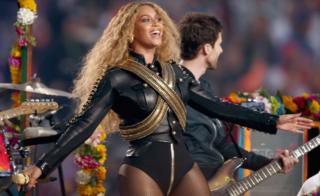 As one of the world’s leading entertainers, Beyonce would have been justified in seeking the weekend off.

Instead, it was a little busier than normal.

On Saturday, she released a previously unannounced new single, with a politically charged video.

On Sunday, she performed at half-time of the 50th Super Bowl, American football’s end-of-season extravaganza and the most-watched television event of the year in the United States.

Soon after, she announced a 40-date world tour that will start in late April in Miami.

But it was her Super Bowl show in California, referencing celebrated black figures of the past and recent black history, that gained the headlines.

Some context – the new single

In it, she refers to the Black Lives Matter movement, details what it is to be black in 2016 United States and sings: “I like my baby hair with baby hair and afros, I like my Negro nose with Jackson 5 nostrils.”

In what mic.com described as “one of the most political music videos in recent memory”, she is seen lying on top of a New Orleans police car that sinks into water, a clear reference to Hurricane Katrina, which ravaged mainly black communities in 2005.

New South Negress journal wrote that, in the video, Beyonce “becomes every black southern woman possible for her to reasonably inhabit, moving through time, class, and space”.

It was this song she launched into at the Super Bowl.

Why do US police keep killing unarmed black men?

Even before the performance, when images of the backing artists were posted from backstage, plenty of people picked up on the visual reference – the berets of the Black Panther Party.

A militant organisation that rejected the non-violent ideals of Martin Luther King, the party was set up 50 years ago to defend black people against violence.

The group was established in Oakland, barely 40 miles (64km) from the stadium in Santa Clara where Beyonce performed on Sunday.

At one point, the singer and her backing dancers raised a fist into the air, mimicking the Black Panthers’ salute.

The reference did not go unnoticed:

At the end of the musical segment, which also featured Coldplay and Bruno Mars, a compilation aired showing some of the most memorable Super Bowl performances of the past.

Among them was Michael Jackson’s show in 1993, but in truth, that performance had been marked by Beyonce already.

Beyonce has hailed Jackson’s influence in the past, saying “Michael Jackson changed me, and helped me to become the artist I am”.

At one point, Beyonce and her dancers formed a large ‘X’ shape. They also formed an arrow, straight lines and a triangle, but it was this particular formation that people noticed.

Three years ago, Beyonce’s sister, Solange Knowles, was seen carrying a placard quoting Malcolm X in protest against the decision to acquit George Zimmerman of the murder of unarmed black teenager Trayvon Martin in Florida.

It wasn’t strictly part of the performance, but images later did the round on social media of Beyonce’s dancers holding a sign while in the centre of the field.

Mario Woods, 26, was shot dead by police in San Francisco in December. Pressure by civil rights groups has led the US Justice Department to open an investigation into the shooting.

Police in cities throughout the US have been subjected to intense scrutiny for using excessive and lethal force against suspects, many of them black.

'It's a hoax,' say California's maskless rebels as coronavirus outbreak worsens in the US