Home » Americas » Why Was the ‘She-cession’ Worse in the U.S. Than Germany?

“Really, it’s not about one single thing.”

— Matthias Doepke, an economist at Northwestern, on what’s causing the global “she-cession”

After more than a year of on-again, off-again school and day care closures around the world, there’s not a doubt as to who has borne the brunt of the caregiving burden: mothers. We saw mothers working out of their bathtubs with their children playing nearby; we saw children interrupting their mothers on live television; we heard mothers scream into the void.

As a result, millions of women — particularly those with children — were either pushed out of their jobs or were forced to downsize their careers, spurring what many economists are calling the world’s first “she-cession.”

In the U.S., White House policy advisers and members of Congress have held up women’s enormous job losses as an urgent reason to expand investment in child care by historic proportions, which they argue will jump-start the recovery.

But a new study published in April by the National Bureau of Economic Research, which analyzed employment figures in 28 developed countries in North America and Europe, presents a more nuanced picture of the damage. The sudden collapse of child care did indeed upend the global economy, but the authors note that other factors, like labor protections or the ability to work remotely, played equally significant roles in overall female employment.

The economic damage was worse for women in almost every country analyzed: The supply of women in the labor force, compared with men, fell in 18 of the 28 countries. But the gender gaps in employment widened the most in Canada and the U.S., said Matthias Doepke, an author of the study and an economist at Northwestern University. 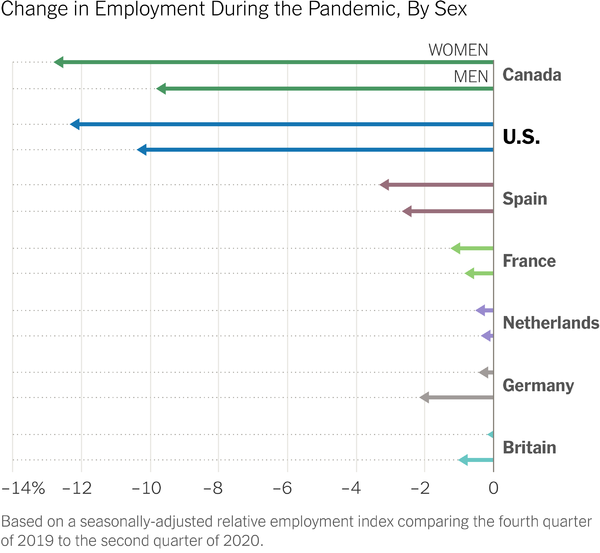 Part of the disproportionate impact on women globally was, undoubtedly, related to the extent of school closures. Schools have been closed the longest in the U.S. and Canada (where female employment fared the worst), for a total of 52 weeks and 43 weeks to date, respectively, according to data from UNESCO, the U.N.’s education agency.

Meanwhile, in France, schools were closed for a total of 11 weeks, and female employment losses were among the lowest of the 28 countries analyzed, Mr. Doepke added. However, France also ended up with higher Covid-19 infection and death rates than other European countries.

Another place where unemployment stayed low for both men and women was Germany, Mr. Doepke noted, even though school closures there reached 30 weeks in total

One critical difference between the U.S. and Germany (as well as several other countries in Europe) is the expansive furlough programs, in which workers remained employed and received subsidized paychecks while working reduced hours or none at all. Often, those paychecks were larger for parents.

In Germany, for example, “very few people lost a job,” Mr. Doepke explained, but when comparing hours worked between countries, Germany had one of the biggest gender gaps.

There is little consensus among economists on whether furloughs, more broadly, are a better tool in a crisis than laying workers off. Furloughs can be seen as a hindrance for workers who might otherwise seek better-paying opportunities, because when workers are on furlough, they are often tied to a specific job.

But job cuts have a “tremendously destabilizing effect on the individual who has been laid off and on their families,” said Sandra Sucher, a professor at Harvard Business School and the author of a forthcoming book, “The Power of Trust.”

Job cuts also slow the economic recovery, Ms. Sucher added, and there is a wide body of research to suggest that when women lose jobs, they take longer to re-enter the work force.

One of the more unexpected findings in Mr. Doepke’s study was that among the major developed countries, including the U.S., Canada and the U.K., the gender gap in economic participation widened more among parents with school-age children than among those with younger children.

“That surprised us,” he said, “because at first we thought that with pre-K kids, child care needs are the highest,” he said. “One good interpretation of that gap is that, overall, a good number of mothers are already out of the labor force for their child’s first three years or so.”

In the U.S., even before the pandemic, many mothers with young children were driven out of the work force in large part because of the lack of paid parental leave and the lack of affordable, accessible quality child care centers. During the pandemic, those who had young children and who continued to work probably held jobs that weren’t terribly affected by the recession or had the means to employ nannies, Mr. Doepke added.

Still, according to Mr. Doepke’s analysis, the lack of child care support during the pandemic explains fewer than 20 percent of the job losses of women compared to men.

The single biggest indicator of job losses for American women in the last year was actually whether they could work from home in the first place. Among mothers of prekindergarten children who could not work remotely, their hours declined by almost 18 percentage points more than fathers. But for mothers who could work remotely, that gap was between two and three percentage points.

Another economic study, published in 2013, suggested that policies like paid parental leave and flexible, part-time schedules also affected female labor force participation. The study found that a lack of family-friendly policies had accounted for an almost 30 percent decline in female labor force participation in the U.S. between 1990 and 2010, relative to more than 20 other countries.

Interestingly, in this pandemic, “we also see large declines among women who don’t currently have kids,” Mr. Doepke said. “So really, it’s not about one single thing.”

Having access to child care is just one part of the equation, but so is workplace flexibility, caregiving responsibilities of elder relatives or even cultural gender norms.

U.S. narrows in on organized extremists in Capitol siege probe