Home » Americas » Will 250 Lanterns Be Enough to Save Chinatown?

After a devastating year for small businesses, a new organization has a plan to bring life back to the neighborhood. First, hang some new lights. 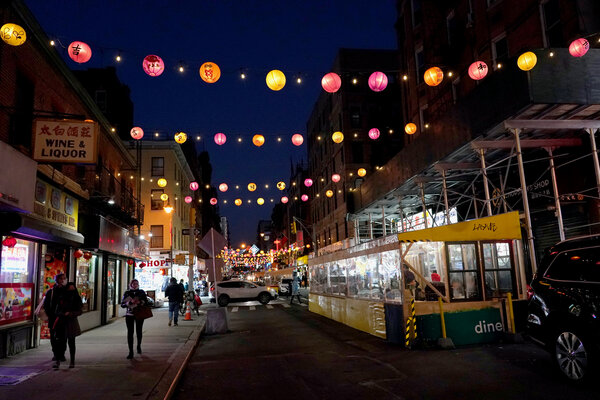 Two days before Christmas, Mott Street, right in the heart of Chinatown, was filled with lights overnight. Residents woke up to 250 violet, pink, orange and gold lanterns hanging above the street. Local artists had painted whimsical designs and auspicious characters onto them: fu, for good fortune; he, for peace. Other characters stood for love, happiness, wealth and longevity.

It is a neighborhood that could use some cheer, said Max Davidson from Admerasia, an advertising agency that focuses on Asian-American entrepreneurs. “Even in January,” he said, referring to the early days of the coronavirus pandemic and the xenophobia that Chinatown suffered, “a lot of the local businesses were reporting a 50 to 70 percent revenue drop.” Since then there has been little improvement.

The lanterns are here to stay, at least into the new year. Light Up Chinatown is a grass-roots initiative that is kept going by donations, and so far, the group has raised almost $32,000. The actor Will Smith even gave $10,000, in conjunction with the nonprofit Asian Americans for Equality, after hearing about the project. Light Up Chinatown hopes ultimately to raise $47,000 to make more blocks look just as appealing (Bayard Street between Mott and Bowery is next).

The idea for the lanterns came from Patrick Mock, 26, who was born and raised in Chinatown and is the manager of 46 Mott Bakery.

In March, his bakery was still open, supplying meals for the homeless, the elderly and hospital workers on the night shift at nearby Mount Sinai Beth Israel. But most neighboring businesses were not. “All the storefronts were closed, and there were no lights,” he said. “When it’s a dark street, you are a bit more on edge.” 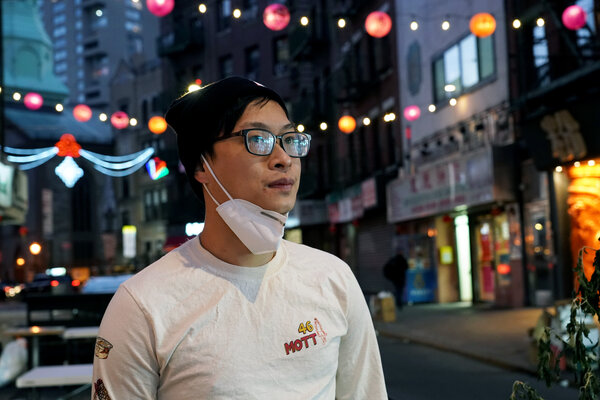 Other festive displays across the city have been honed over decades. The first Christmas tree at Rockefeller Center went up in 1931. The extravagant Christmas lights tradition in the Dyker Heights neighborhood of Brooklyn started in the 1980s. But Light Up Chinatown materialized in a matter of weeks thanks to Mr. Mock’s coalescing forces in the community.

“Light Up Chinatown was just an idea about two months ago,” said Wendy He, 25, a consultant at IBM who helped raise money for the project. “This was more of a collective group effort. Different people did different things.”

Send Chinatown Love, an organization that she works with and that supports local businesses, oversaw much of the financing.

“We launched the fund-raising website on Nov. 17,” she said. Donations of any size were welcome, but $45 would get someone’s name inscribed in a hanging lantern, and $150 would get the donor a matching paper lantern to take home.

The street lanterns came from Pearl River Mart, the longtime Chinese-American department store, which is relocating its flagship store this year, though it has not announced where.

“We ordered them on Dec. 4,” said Joanne Kwong, the second-generation owner of Pearl River. “Ordinarily a traditional lantern installation would be red, but it just so happens red lanterns were out of stock. I guess people needed a lot of luck this year.”

Mr. Mock persuaded more than a dozen volunteers to work alongside lighting professionals (some stayed until 3 in the morning) one night to help hang the lanterns. Inspired by the elaborate outdoor dining setup at Buddakan, which is part of Chelsea Market, Ms. Kwong set up a station to dip each of the 250 lanterns in a polyurethane mixture to protect them from the elements.

Pearl River Mart has a location at Chelsea Market, and Ms. Kwong asked the owner of Buddakan what made its lanterns so hardy. (Nylon, the material from which the lanterns are made, is waterproof. The glue that holds the parts together is not.) The restaurant owner happily passed on the urethane formula, and the Mott Street lanterns stood up to their first test: a Christmas Eve storm that left hundreds of thousands of New Yorkers without power.

For Mr. Mock, the greatest challenge was convincing the members of the older Chinatown organizations that lights could bring real change. It helped that a public confrontation with Mayor Bill de Blasio, in which Mr. Mock implored the mayor to do more to help rescue Chinatown, went viral after a New York Post reporter, Elizabeth Meryl Rosner, posted a video of the incident on Twitter.

The old-timers of Chinatown, never very demonstrative, seem to approve. Mr. Mock said it’s hard for people of his parents’ generation to say “I love you.”

“But they do other things,” he added.

“They all try to feed me, they say I don’t eat enough, or I don’t sleep enough. They stop me on the streets. That is their way of saying thank you.”

Lockdowns, Round 2: A New Virus Surge Prompts Restrictions, and Pushback