When the pandemic engulfed New York, it highlighted the vital role public transit plays in a city where essential workers — many of whom are poor and people of color — count on the subway and buses to get around.

Although the subway is the city’s lifeblood, the mayor of New York has little say over the subway because it is operated by an agency controlled by the governor. But as the city slowly recovers, public transit is central to its efforts to bring back daily life and has become a key focus in the race to become the next mayor.

And New York’s next leader does have far more influence over buses by virtue of controlling the streets they run on.

Buses are a key cog of the vast public transit system, even if they are often overshadowed by the subway. Carrying well over two million riders daily before the outbreak, the city’s bus network by itself is bigger than many of the country’s largest urban transit systems.

The sprawling bus network links many neighborhoods, especially outside Manhattan, that are not well served by the subway and transports a ridership that is more diverse and makes less money than commuters who use the trains.

Bus riders tend to be service workers, from hourly employees at fast food restaurants and clothing stores to a vast army of home health aides, many of whom travel across different boroughs and do not need to be taken to Manhattan, which is the subway’s main purpose.

“By far the mayor’s most significant power over transit is the control of the streets,” said Ben Fried, a spokesman for TransitCenter, a nonprofit research and advocacy group. “There’s a huge opportunity awaiting the next mayor to improve the bus system.”

Mayor Bill de Blasio, who did little to significantly enhance bus service until late in his eight-year tenure, has accelerated projects during the pandemic. The city built 16 miles of new bus lanes last year, and expanded a successful busway that cleared cars off a major crosstown street in Manhattan to three other streets around the city. Another three busways are planned by year’s end for a total of seven.

But before the pandemic, clogged streets had reduced bus speeds to a crawl and New York lagged far behind other cities in building dedicated bus lanes.

Now, the eight leading Democratic candidates for mayor have pledged to make buses a centerpiece of their transportation agendas.

Their plans, shared in response to written questions from The New York Times, range from more bus lanes to a rapid transit network that would operate more like a subway.

The proposals could make New York a national model — but would also require reclaiming vast chunks of the city’s limited street space and exacerbating an already pitched battle with drivers and some community leaders.

“For a truly equitable New York City, we must improve our bus system, with a focus on improving speed, reliability and safety,” said Maya Wiley, a former counsel to Mr. de Blasio, who wants to expand a city program that provides half-price fares to low-income riders by reallocating funds from policing for fare evasion.

Scott Stringer, the city comptroller, said he would be the city’s “bus mayor.”

“I’m going to harness the power of our streets to revolutionize our transportation system for all New Yorkers and be the streets and bus mayor we need,” he said.

Kathryn Garcia, a former city sanitation commissioner, added, “Public transportation is a driver of economic growth that will, in turn, generate new housing and new jobs.”

The biggest hurdle for any mayor, of course, is that day-to-day bus and subway service is operated by the Metropolitan Transportation Authority.

Andrew Yang, the former presidential candidate, wants to take control of the buses and subways from the M.T.A. But experts say a municipal takeover is unlikely because of the bureaucratic and financial hurdles of restructuring a mammoth state agency.

“The politics of wrestling something of enormous value from Governor Cuomo don’t look very good,” said Nicole Gelinas, a senior fellow at the Manhattan Institute, a conservative think tank. “There’s almost no practical chance of it happening.”

Even before the pandemic, the bus system had steadily lost riders as buses trapped in traffic became unreliable. Average weekday bus ridership fell to under 2.2 million riders in 2019 from nearly 2.5 million in 2015.

Though ridership on buses plunged less than on the subway during the pandemic, it remains about half of what it was before, with 1.1 million bus riders on a recent weekday.

Bus speeds, which rose at the height of the pandemic as traffic disappeared, dropped to 8.2 miles per hour in April as cars returned.

Though New York has significantly expanded bus lanes in recent years to 138 miles, that is still lower than in other major cities, including London, which has about 180 miles of bus lanes.

Here is what the candidates said they would do to improve bus service:

Lanes just for buses is a key step. 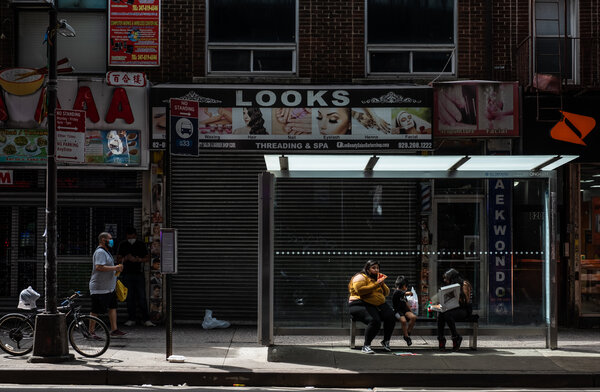 All the candidates said they would build more bus lanes.

Dianne Morales said she supported a call by a coalition of community, environmental and business groups to create 500 miles of new protected bus lanes by 2025 to ensure every New Yorker lives within a quarter-mile of a bus lane.

Ms. Morales, a former nonprofit executive, said she would start with more bus lanes in underserved neighborhoods outside Manhattan.

“When you look at transportation investments and where transit deserts are in New York City, the patterns are all designed to benefit wealthy neighborhoods,” Ms. Morales said. “The reality is that Black and brown communities have less access to transit.”

Use cameras and tech to speed up service.

To help keep bus lanes clear, the city has installed 372 enforcement cameras to catch drivers who travel in the lanes, with fines starting at $50. The M.T.A. also has 123 buses with cameras that help ticket drivers for blocking bus lanes.

“But in a way that is fair and does not unjustly target any one particular community,” Mr. Donovan added.

Covid vaccine volunteer, 72, struck by lightning after getting Moderna injection