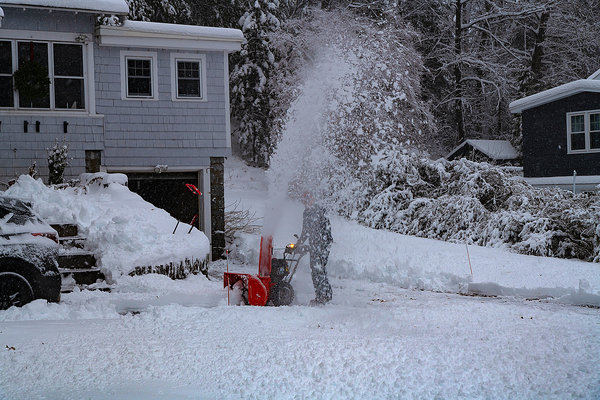 A winter storm is blasting New York and Massachusetts.

The lull of Thanksgiving came to an abrupt and frosty end on Monday, as commuters across the Northeast awoke to a blanket of snowfall, news of school closings and predictions that the sudden blast of winter would continue churning over the region, from Pennsylvania to Maine.

Central and eastern New York were perhaps the hardest hit from Sunday into Monday, with more than a foot of snowfall in some places and up to 20 inches in Saratoga County. The snowfall ranked in the top 10 for the month of December for the Albany area, with an additional six to eight inches of snow expected through Monday night.

Gov. Andrew M. Cuomo of New York on Monday declared a state of emergency for Albany, Saratoga and several other counties in the region, and said he would deploy 300 members of the National Guard to help with snow removal.

From Pennsylvania to Massachusetts, schools and colleges closed for an early-season snow day. More than 350 flights into or out of the United States had been canceled as of Monday morning, according to FlightAware.com, with many of the scrubbed flights at the New York and Boston airports.

And the snow was not going away just yet: The storm was expected to hover over the region and move slowly northeast, hitting Boston with a second round of snow on Monday night and reaching Maine by Tuesday morning.

“It’s going to get cranking tonight and tomorrow morning,” said Frank Nocera, a meteorologist with the National Weather Service in Norton, Mass., who said that the Boston area, which has already received four to eight inches of snow in some suburbs, could see those amounts double by Tuesday.

“The morning commute will be impacted tomorrow,” he said, adding that more school closings would not be “out of the question.”

The weather turned deadly over the holiday weekend.

The storm was blamed for a number of deaths over the long holiday weekend.

In Missouri, officials said three people were killed on Saturday when their vehicles were swept off flooded roads, The Associated Press reported, and a 48-year-old Louisiana man died in a separate incident.

A highway pileup near Kingston, Ontario, involving about 30 vehicles, including a number of tractor-trailers, left one person dead and several injured, according to officials. Curtis Dick, a constable with the Ontario Provincial Police, said the crash was related to the storm, and that the area had seen a “significant amount of snowfall” accumulate over a short period of time.

The authorities in Arizona found the bodies of two young children who had been among nine people riding in a vehicle on Friday that was swept away as it tried to cross a creek swollen with runoff from the storm. A third child was still missing.

Investigators are looking into whether blizzard conditions in South Dakota caused the crash of a private plane shortly after it took off bound for Idaho on Saturday. The 12 people on board belonged to the same family; nine were killed.

Can it be a winter storm if autumn isn’t over yet?

The calendar says the first day of winter in the Northern Hemisphere is still nearly three weeks away. But the storm that has been slashing across the country is correctly called a winter storm, because “winter” means something a bit different to a meteorologist than it does to astronomers and calendar-makers, who mark the start of the season with the winter solstice.

That’s the moment when the northern half of the earth is tipped most directly away from the sun. This year, the solstice will occur at 11:19 p.m. Eastern time on Dec. 21, which will be the shortest day and longest night of the year.

But meteorologists define the seasons using the annual cycle of average temperatures, with the three coldest months of the civil calendar considered “meteorological winter.” That season began on Sunday, Dec. 1.

So the weather isn’t just wintry — to a weather forecaster, it’s a winter storm.

What the Mayor, the Police and the Prosecutor Had to Say After the Jussie Smollett Charges Were Dropped