Home » Americas » With the Election Looming, the Nation’s Divisions Play Out in the Streets 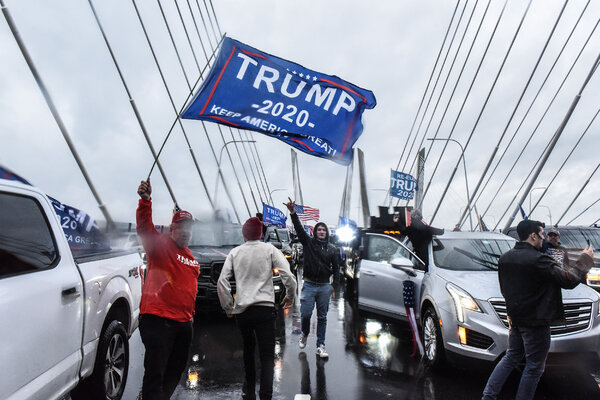 Vehicles with Trump flags halted traffic on Sunday on the Garden State Parkway in New Jersey and jammed the Mario M. Cuomo Bridge between Tarrytown and Nyack, N.Y. Another pro-Trump convoy in Virginia ended in a tense shouting match with protesters as it approached a statue of Robert E. Lee in Richmond.

In Georgia, a rally for Democrats was canceled shortly before it was scheduled to begin on Sunday, with organizers worried about what they feared would be a “large militia presence” drawn by President Trump’s own event nearby.

As the nation races toward Election Day, the tensions and acrimony surrounding an extraordinarily divisive campaign, coming on the heels of a summer of protests and racial unrest, are bleeding into everyday life and adding further uncertainty to an electoral process in which Mr. Trump has not committed to a peaceful transfer of power.

Sunday’s incidents came a day after a group of Trump supporters in Texas, driving trucks and waving Trump flags, surrounded and slowed a Biden-Harris campaign bus as it drove on Interstate 35, leading to the cancellation of two planned rallies. The F.B.I. confirmed on Sunday that it was investigating the incident.

On Saturday, President Trump tweeted a video of the incident with a message, “I love Texas!” After, the F.B.I. announced it was investigating, he tweeted again, saying, “In my opinion, these patriots did nothing wrong,” and instead “the FBI & Justice should be investigating the terrorists, anarchists, and agitators of ANTIFA.”

In Graham, N.C., a get-out-the vote rally on Saturday ended with police using pepper spray on some participants, including young children, and making numerous arrests. Organizers of the rally called it flagrant voter suppression.

“These people are afraid,” the Rev. Gregory B. Drumwright, his eyes still burning, said as he assailed the police action in Graham. “There’s a climate of fear around this.”

And those were just the incidents that were caught on video. Kristen Clarke executive director of the Lawyers’ Committee for Civil Rights Under Law, a voting rights group, said there had been many more. The group settled a lawsuit last month against officials in Graham who they accused of violating the First Amendment rights of protesters.

“We are very concerned about groups lurking and trying to intimidate voters in particular communities,” Ms. Clarke said. Her group’s election protection hotline received calls from nearly a dozen counties in Florida just over the past week, she said, reporting individuals or groups harassing voters at the polls.

“We want voters to know these sporadic incidents are being addressed, and we want them to be able to cast their ballot,” Ms. Clarke said.

Brazil coronavirus outbreak worsens as country could soon be No. 2 in cases