The Fawn fire, which has burned nearly 10,000 acres, was spreading quickly on Friday, a day after the authorities accused a Palo Alto woman of igniting the blaze. 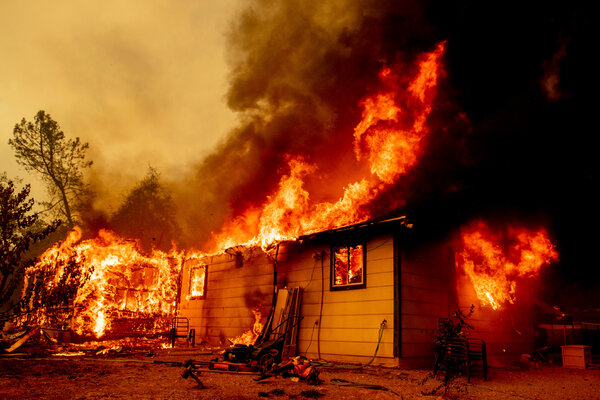 A woman from Palo Alto, Calif., was charged with arson in connection with a wildfire that has burned about 9,850 acres and damaged more than 25 buildings in Shasta County, worsening the toll of an already brutal fire season in the state, the authorities said.

The woman, Alexandra Souverneva, 30, who was arrested on Thursday, could face up to nine years in state prison if convicted, Shasta County prosecutors said. The Fawn fire was about 10 percent contained as of Friday night and prompted mandatory evacuations in parts of the county.

Ms. Souverneva may have also set other fires in Shasta County, which is in Northern California, the authorities said. Officials declined to specify which other fires she may be tied to but the county district attorney, Stephanie A. Bridgett, said in an interview on Friday that it was more than one in her county and at least another in a separate county.

Wildfires in California have burned almost two million acres so far this year, according to Cal Fire, the state’s firefighting agency.

Employees of a local business in the Mountain Gate area near Redding, about 160 miles north of Sacramento, told Cal Fire officials that Ms. Souverneva was seen trespassing and “acting strangely” on Wednesday, when the fire started, Ms. Bridgett said at a news conference on Friday night. She did not elaborate.

Ms. Souverneva was asked to leave, and employees saw her flee toward the hills above their location that afternoon, said J. T. Zulliger, the Cal Fire battalion chief. The fire began about that time at 4:45 p.m. local time, he said.

After being medically treated and evacuated, she was arrested, Chief Zulliger said.

A message left at a phone number listed for Ms. Souverneva was not answered on Friday. It was not immediately clear whether she had a lawyer.

Ms. Souverneva majored in chemistry and biology at the California Institute of Technology and graduated in 2012, said Kathy A. Svitil, a school spokeswoman. According to her LinkedIn profile, Ms. Souverneva worked as a part-time tutor in 2020 and a researcher of medicinal chemistry at Gilead Sciences before that.

The Fawn fire has been spreading rapidly because of dry winds, the authorities said. “People are having to flee the area very quickly,” Ms. Bridgett said. “There are a lot of community members that are still evacuating.”

Fourteen arson arrests have been made this year in Shasta County, and 103 have been made statewide, according to Chief Zulliger. He did not share a possible motive in Ms. Souverneva’s case, but he said that arsonists typically act on compulsion.