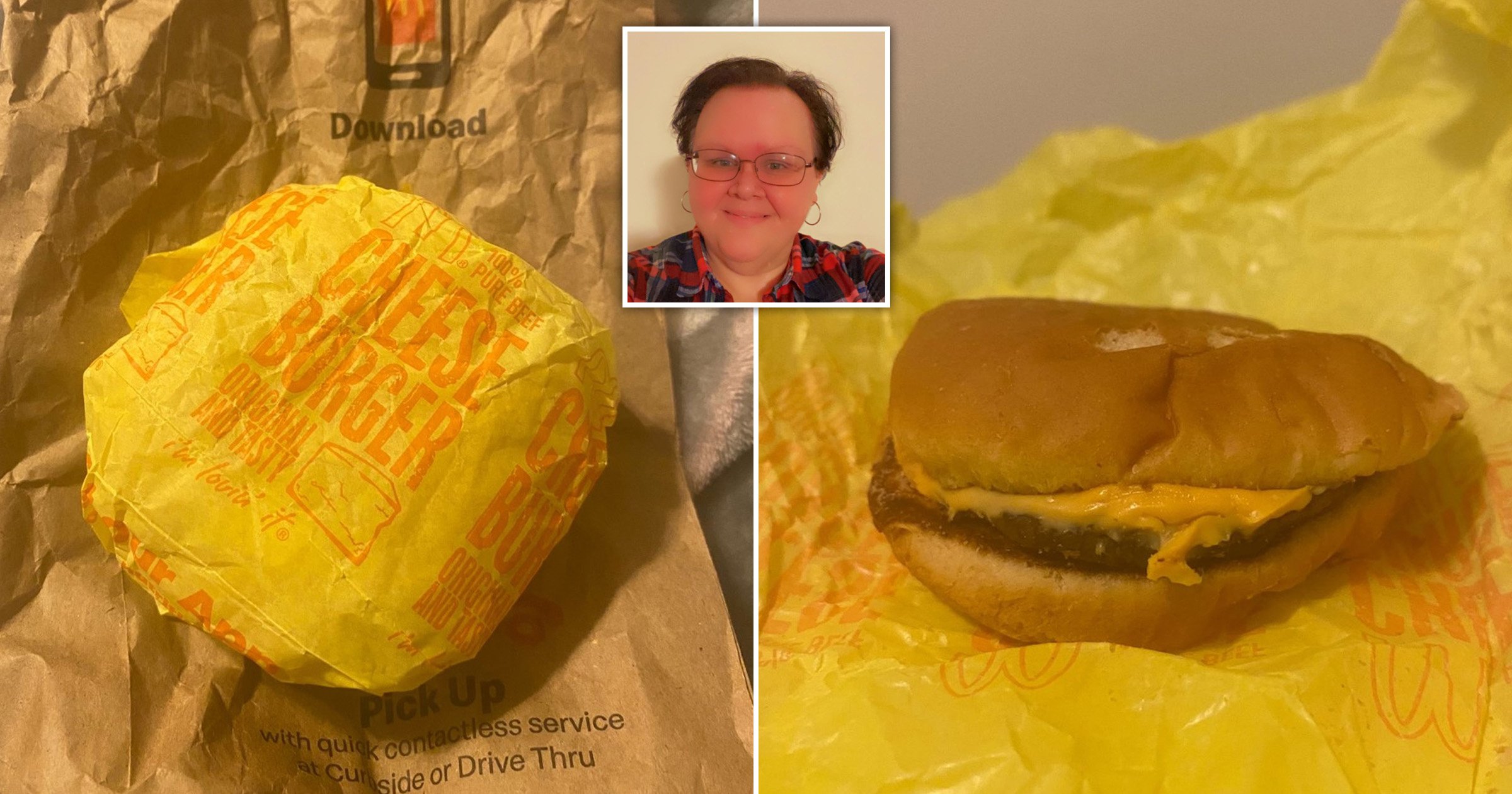 A receptionist said she is quitting fast food after claiming a McDonald’s cheeseburger she saved for five years still looked the same as when she bought it.

Megan Condry, from Washington DC, said she purchased two cheeseburgers and some fries from a drive thru in November 2017.

She ate one of the burgers and the chips, but the 41-year-old threw the other one in the back of her car and planned to eat it later.

But when Megan found it five days later she said it hadn’t even started to rot, and decided to keep it for much longer as an ‘experiment’.

She came across it in the back of a cupboard while sorting out Christmas decorations some five years later – and said it was rock solid, but not mouldy.

‘It was untouched until around three weeks ago,’ Megan said.

‘I was in the closet sorting my Christmas stuff and I knocked the bag and the burger rolled out. I’d forgotten about it.

‘It was rock hard, as hard as a hockey puck. I could probably smash a window with it.

‘Everything is completely dry and it could start to crumble.

‘There was no smell whatsoever and it looks the same as the day I bought it.

‘I’ve tried to pry it apart but if I try to take it apart, I think it would break. It’s just a solid mass.

‘I want to know what it looks like on the inside but I can’t see it.

‘It hasn’t shrunk in size or evaporated. I assume there’s no bacteria to it, it makes me sick.

‘I think it has so many preservatives [in it] or how else would it have lasted that long?’

Megan said seeing an old burger on display in her doctor’s surgery inspired her to carry out the experiment.

After finding the burger in her car again, she wrote the date on the bag and hid it away.

‘A few days later, I was cleaning my car and I realised I’d forgotten about it’, she added.

‘I got it out and it looked exactly how it was when I bought it. It was rock solid from the air I think but there was nothing wrong with it.

‘The cheese burger and bun looked the same, it was just really hard. It didn’t smell, it hadn’t rotted or grown mould.

‘I like science stuff. A couple of years before I went to the doctor and he had a cake stand with a burger displayed that he’d kept for 20 years.

‘I would have just thrown it out if it wasn’t for me seeing the burger in the doctor’s office.

‘I threw it in the back of my closet and left it untouched until a few weeks ago.’

She has also put the burger back in the cupboard, and will check it again after another five years.

‘McDonald’s isn’t my thing, I got it that day because it was close to work but I have friends who eat fast food on a regular basis and they say they feel sick,’ Megan added.

‘People think it’s so gross. It doesn’t surprise me that it didn’t rot. Is this why we feel bad after eating fast food?

‘Whenever I ate it, my stomach wouldn’t feel good.

‘I can’t imagine wrapping my hand around that and eating it now.’

A McDonald’s USA spokesperson said: ‘Our burgers are made only with 100% USDA inspected beef.

‘There are no preservatives or fillers in our patties and the only thing ever added is a touch of salt and pepper on the grill.’

46 people taken to hospital after gas leak at Winnipeg hotel

Canada’s abortion issue gets renewed attention ahead of federal election