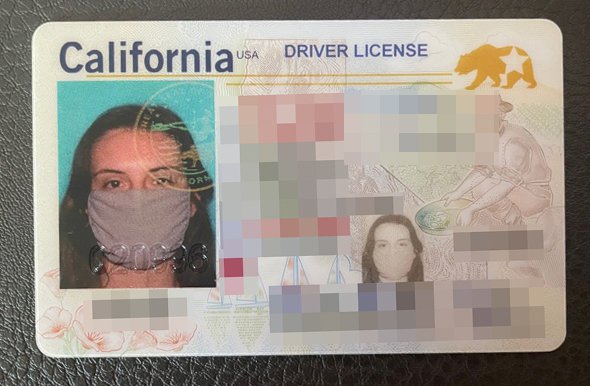 Face masks have become so second nature some people are finding it hard to remember when to take them off.

When Lesley Pilgrim, 25, needed a new picture for her driving licence, she went down to the ID office suitably covered up to protect herself from the virus.

But she played it a little too safe and happily posed for the picture with the mask still on her face.

The photographer noticed and asked her to remove it before taking a second picture.

It wasn’t until a week later when the new ID arrived in the post that Lesley realised they had printed the first picture.

The ID might be valid but the authorities in Orange County, California, have asked her to return for a replacement free of charge.

Lesley said: ‘At first I just kind of stared at it. It took some time to process. Then I started thinking, “Oh gosh, as a law student this can’t be legal.”

‘If I give this to a police officer he’s going to think it’s fake and I’m going to get in trouble.

‘I started thinking about all the legal ramifications.

‘I sent it off to my friends, concerned about how this would operate, and they all just laughed at me.

‘I said, “I’m glad you all think it’s hilarious but I want to cry because now I have to go back to the DMV and go back in line.”’

Despite being concerned her ID might not be legal, Lesley has successfully used it twice while she waits for a new one.

She said: ‘The first time I gave it to a waiter and he didn’t say anything so I thought, that’s funny, they probably just looked straight at the date.

‘But then my friend said “look again, look at that picture”, and he said he noticed but didn’t want me to be embarrassed so didn’t say anything.

‘The second time the guy just goes “oh, your mask’s on” and then just moves on with his life. It is California.’