We’re covering fires in the Amazon, the battle to oust the leader of the National Rifle Association and a court ruling about the Electoral College. It’s also Friday, so there’s a new news quiz. 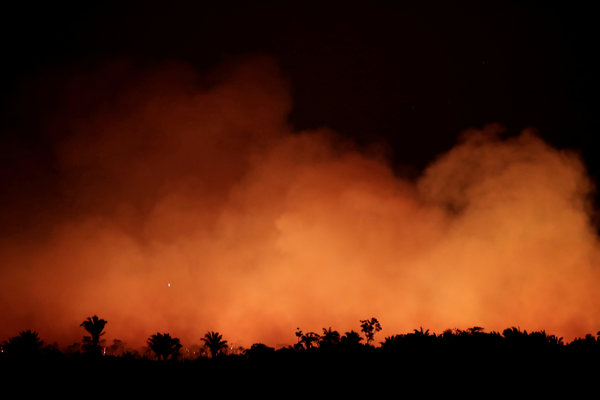 Brazil faces a backlash as the Amazon burns

With dozens of fires in the world’s largest rain forest, the government of President Jair Bolsonaro was struggling on Thursday to contain growing global outrage over its environmental policies, which have paved the way for runaway deforestation.

The Bolsonaro administration favors industries that want greater access to protected lands, and many of the fires were set by farmers and loggers. Brazil’s strict environmental laws are often violated with impunity.

President Emmanuel Macron of France called the fires “an international crisis” and said they should be discussed at the Group of 7 summit he’s hosting this weekend. Mr. Bolsonaro called that suggestion “colonialist.”

The details: Forest fires are common in Brazil in this season, but there have been more than usual this year. Watch our video showing the scope of the destruction.

Response: Mr. Bolsonaro’s far-right administration has claimed, without evidence, that nongovernmental organizations could have started fires to undermine him. Officials also called the international characterization of the fires intentionally misleading.

More than 730,000 Rohingya Muslims fled Myanmar for Bangladesh two years ago to escape ethnic cleansing, and governments from both countries have vowed to get them home.

But a Times investigation found that only a few dozen had been repatriated, although maintaining the fiction that refugees will soon return is politically useful for both sides.

Most Rohingya are still in Bangladesh, crammed into the world’s largest refugee camp. But many say they would rather endure the conditions there than return to a country whose government has refused to admit that atrocities were committed.

Go deeper: This report by our Southeast Asia bureau chief, Hannah Beech, is part of a series by The Times that investigates the promises made by those in power when things go wrong.

How the N.R.A.’s leader survived a revolt

Wayne LaPierre, the chief executive of the National Rifle Association, has been challenged this year by the organization’s top lobbyist, its president, its advertising firm, and several board members and donors.

But Mr. LaPierre, who has run the N.R.A. since 1991, has remained in office and continues to advance the group’s agenda, including this week when he appeared to personally persuade President Trump to resist significant gun control measures after two mass shootings.

A Times review of previously undisclosed documents reveals the depth of the effort inside the gun rights group to oust its leader.

Yesterday: The N.R.A. dismissed its longtime outside counsel, people with knowledge of the decision said. A second outside counsel and a top in-house counsel also resigned, after an internal inquiry showed that the lawyers were involved in moves against Mr. LaPierre.

A ‘troublemaker’ with a clean conscience

Jimmy Lai, a media tycoon, is the one prominent businessman in Hong Kong who has openly supported the antigovernment demonstrations there.

For that, China’s state-controlled news media has denounced him as a C.I.A. agent and a “black hand.” Last week, his name was purged from his family’s genealogical records across the border in southern China.

Mr. Lai has also cheered on President Trump, whom he describes as “the only one who plays hardball with China. This is the only thing that China understands.” Our correspondent spoke to Mr. Lai about his support for the Hong Kong protesters.

Related: Hong Kong residents planned to join hands and form human chains today in a call for direct elections, a display that recalls a major anti-Soviet demonstration from 30 years ago.

Another angle: Mr. Trump has started to show greater solidarity with the protesters, and to see them as potential leverage in trade negotiations with Beijing.

If you have 30 minutes, this is worth it

Did Venus Williams get her due?

She has been ranked No. 1 in the world and won seven Grand Slam tournaments, but it’s easy to lose sight of Venus in the light of her extroverted younger sister, Serena.

With the U.S. Open starting on Monday, The Times Magazine examines the legacy of Venus Williams, now ranked 52nd in the world, and how she changed women’s tennis.

Electoral College ruling: A federal appeals court said that members of the Electoral College, who cast the actual votes for president, may choose whom they please, however their states voted.

Thwarting robocallers: AT&T, Comcast and Verizon are among the phone companies that agreed to adopt new call-blocking technology and other measures to help regulators track swindlers.

Tensions in Asia: South Korea will not renew an intelligence-sharing deal with Japan, a sign of deteriorating ties between America’s two closest allies in the region.

Detentions in Kashmir: At least 2,000 people have been detained in the disputed territory during India’s crackdown. The United Nations Human Rights Office said it was “gravely concerned.”

Overstock chief resigns: Patrick Byrne, the online retailer’s chief executive, stepped down after disclosing last week that he had had a romantic relationship with a Russian agent.

From The Times: We’re introducing a special audio series, “1619,” which is part of our exploration about the legacy of American slavery. Listen to the first episode here.

Snapshot: Above, Hahyun Kim gets ready in the morning at the Port Authority Bus Terminal in Manhattan. The salonlike atmosphere of the second-floor women’s bathroom, which one attendant calls “the beauty bar,” is at odds with the transit hub’s bad rap.

News quiz: Did you follow the headlines this week? Test yourself.

Modern Love: In this week’s column, a couple who dated in college agree to meet in five years to see if they’re meant to be together.

Late-night comedy: Most of the shows are in reruns, so our column is on hiatus.

What we’re reading: Adam Pasick, on the briefings team, writes: Jeff Bezos has been criticized as a micromanager. But Recode reports that the Amazon founder is quietly giving tens of millions of dollars to a few dozen charities without demanding supervision.

Cook: An imperfect blueberry pie is a thing of beauty.

Listen: “Lover” is the title track on Taylor Swift’s new album, which was released overnight. We’ll have a review later today.

Watch: Perry Henzell’s “The Harder They Come,” with one of cinema’s most infectious scores, is back on the big screen in New York.

Smarter Living: How do you stop your smart speaker’s human helpers from eavesdropping? Actual people may listen to what you tell Siri, Google Assistant or Alexa. But most tech companies will let you disable human vetting for their virtual assistants, and there are other steps to minimize the information shared.

And going with the flow may help you overcome the fear of flying in bumpy skies.

‘The Wizard of Oz’

The film is celebrating its 80th anniversary on Saturday, but it very nearly ended up a disastrous footnote in the history of Hollywood.

The production was a mess, cycling through directors and screenwriters. Victor Fleming, the sole credited director, replaced Richard Thorpe less than two weeks into filming, and shot most of the scenes before sprinting off to save “Gone With the Wind.” King Vidor finished the job.

Cast members were injured during filming: Margaret Hamilton, who played the terrifying Wicked Witch of the West, was severely burned; and Buddy Ebsen, cast as the Tin Man, was poisoned by his makeup. (Jack Haley took over the role.)

The movie went over budget and wasn’t a hit on its initial release. Today, it endures as a cultural icon, thanks in large part to TV syndication from the late 1950s; Judy Garland’s signature performance of “Over the Rainbow”; and those coveted ruby slippers.

Thank you
Melina Delkic helped compile today’s briefing. Mark Josephson and Eleanor Stanford provided the break from the news. Aisha Harris, a TV editor, wrote today’s Back Story. You can reach the team at [email protected]

P.S.
• We’re listening to “The Daily.” Today’s episode is about our 1619 Project.
• Here’s today’s Mini Crossword, and a clue: Like skin that’s touched poison ivy (five letters). You can find all our puzzles here.
• The Times is running 10 contests for teenagers this school year, including editorials, photography and podcasts. There are also new contests for middle schoolers.

Letters to the Editor: 'Brexit lurches closer to cliff-edge catastrophe – and still those in power sit on their hands'