We start today with an extensive college admissions scandal, another Brexit defeat for Theresa May, and California’s expected death penalty moratorium. 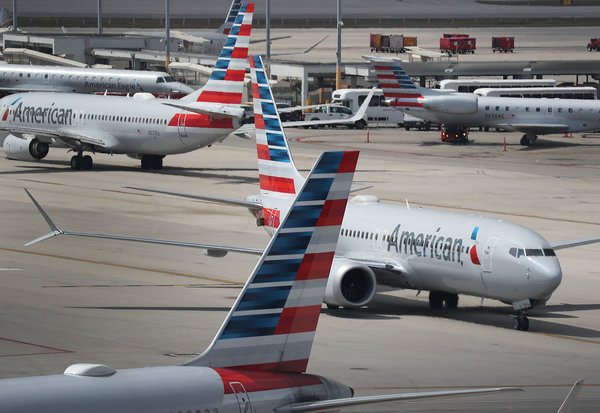 Boeing jets pulled from the skies, but not in U.S.

The cause of the crash is unclear, but the groundings were driven in part by regulators’ concerns about similarities to a deadly accident in October involving a 737 Max 8.

The U.S. continues to hold out. Boeing’s chief executive made a personal appeal to President Trump, assuring him of the model’s safety. The Federal Aviation Administration said that the planes could keep flying as it continued its review.

Catch up: At least two pilots in the U.S. had filed incident reports that raised concerns about safety and training on the Max 8 jets. Here’s the latest.

Fifty people were accused in a scheme to buy spots at Stanford, Yale and other competitive universities in what a U.S. attorney called the “largest college admissions scam ever prosecuted by the Department of Justice.”

Those charged include Hollywood celebrities and prominent business leaders, as well as top college athletic coaches who were accused of accepting millions of dollars to help admit students.

Why this matters: The scheme, unveiled by federal prosecutors on Tuesday, showed the lengths that some parents will go to and underscored how cutthroat college admissions have become. Here are excerpts from the indictment.

The details: The actresses Felicity Huffman and Lori Loughlin were among those charged. See the full list.

The outcome of the vote was expected, but it nonetheless deepened the crisis facing Mrs. May. In acknowledging her latest defeat, she angrily told lawmakers they would now need to make hard choices.

What’s next: Parliament is set to vote today on the possibility of leaving without a deal, a potentially chaotic outcome that lawmakers rejected in a nonbinding motion in January. A vote is also scheduled this week over whether to request an extension for the withdrawal, something many analysts say is now inevitable.

Perspective: Mrs. May has no power, no way forward and nothing left to lose, a British journalist writes. “She may as well burn it all down and try to start afresh.”

Back from battle, women endure harassment at V.A.

Health care for life is one of the most celebrated benefits of military service, but entrenched sexism and harassment at veterans hospitals is driving many away.

The number of women using veterans health services has tripled since 2000 — to about 500,000, from 159,810 — but they make up only 8 percent of all users of V.A. health care. The Department of Veterans Affairs has made progress in accommodating the growing number, but sexual harassment persists, veterans and lawmakers say.

Voices: “You felt like you were a piece of meat,” a retired Army sergeant said. “Standing in line at the registration desk, I was getting comments from the male patients behind me, looking me up and down.”

If you have half an hour, this is worth it

The tragedy of Baltimore

Ever since Freddie Gray died after suffering injuries in police custody in 2015, violent crime in Baltimore has surged. In 2017, the city recorded 342 murders, far higher than any other urban area of 500,000 or more residents.

In a collaboration with The Times Magazine, a reporter for ProPublica who lives in Baltimore examined the city’s recent troubles, which he sees as being caused by “nothing less than a failure of order and governance the likes of which few American cities have seen in years.”

California capital punishment: Gov. Gavin Newsom is set to announce a moratorium on executions in the state today, granting a temporary reprieve for 737 inmates on the largest death row in the Western Hemisphere.

Catholic abuse scandal: Cardinal George Pell of Australia was sentenced today to six years in prison for molesting two boys in 1996. And a former New Jersey priest who was accused of sexual abuse was found fatally shot in his home, in what the police are treating as a homicide.

Immigration centers closed: The Trump administration is preparing to cut back on support services for those applying overseas to move to the U.S.

Snapshot: Above, preparations on Tuesday for an elephant race, part of a festival in Vietnam’s central highlands. Locals say the event is a celebration of the animals, but conservation groups are calling for a ban, saying it is cruel and outdated.

A big Jets deal: Le’Veon Bell, the superstar running back who sat out the last N.F.L. season in a salary dispute with the Pittsburgh Steelers, has agreed to join the New York Jets.

Surprising N.F.L. trade: The New York Giants have sent Odell Beckham Jr., their most popular player and the highest-paid wide receiver in the league, to the Cleveland Browns.

Late-night comedy: Stephen Colbert reacted to the news of the college admissions scandal: “You know how the conspiracy theorists say, ‘Everything is rigged for the wealthy and famous’? Well, as a wealthy and famous person, let me just respond by saying: You’re absolutely right.”

What we’re listening to: This Pineapple Street podcast. Our Magazine writer Jenna Wortham says Julie Yip-Williams, who died last year after being diagnosed with colon cancer, created “a wonderful and at times devastating meditation on death and what happens to those we leave behind.”

Cook: With a little forethought, marinated short ribs can be part of a balanced weeknight rice bowl.

Listen: T.S. Eliot had a truly remarkable speaking voice. Now you can listen to previously unheard recordings of him discussing his poetry in 1950.

Watch: We have reached Season 3 in our grand rewatch of “Game of Thrones.” Sign up to get our guides.

Look: Nike has revealed new uniforms for 14 of 24 teams competing in the Women’s World Cup. Each was made specifically for female athletes.

Smarter Living: In the past, when we encountered bacterial threats, our immune systems dealt with them and adapted. But our bodies are becoming unable to do this, partly as a result of overprescribed antibiotics, which goes to show what scientists are finding: You’re not safer when you try to eliminate every risk from your environment.

It’s possible to revamp your basketball game at nearly any age. Here’s how a middle-aged father of three sons did it.

The federal district courthouse in Washington

It is the same building where the special counsel, Robert Mueller, has used a grand jury to return indictments.

Your Back Story writer has visited the building often during months of covering hearings involving Mueller targets, including Mr. Manafort, Roger Stone and Michael Flynn.

A little over half a mile from F.B.I. headquarters, the courthouse has a bland limestone exterior, tall windows, long hallways and artificial lighting, which combine to create a sterile aura of law and order. Outside, protesters and camera crews have jostled as Trump associates enter and exit through revolving doors familiar to cable news junkies.

Today, guests will crowd into wooden pews as Mr. Manafort waits in a tiled holding room just off Judge Amy Berman Jackson’s chambers. He will enter the courtroom, perhaps for the last time, in a suit and tie, a special request granted by Judge Jackson.

Thank you
To Mark Josephson, Eleanor Stanford and James K. Williamson for the break from the news. Noah Weiland, a reporter in our Washington bureau, wrote today’s Back Story. You can reach the team at [email protected]

P.S.
• We’re listening to “The Daily.” Today’s episode is on “Medicare for all.”
• Here’s today’s mini crossword puzzle, and a clue: A horned African mammal (5 letters). You can find all our puzzles here.
• The latest newsletter from The Times is by our Op-Ed columnist Paul Krugman, who won a Nobel Prize in economics.

Inyoung Kang is an editor and producer based in London. @inyoungk

Chris Stanford is based in London and writes the U.S. version of the Morning Briefing. He also compiles a weekly news quiz. He was previously a producer for the desktop home page and mobile site, helping to present The New York Times’s news report to readers. Before joining The Times in 2013, he was an editor and designer at The Washington Post and other news organizations. @stanfordc

Opinion | Blessed Are the Refugees