For Donald Trump’s first foreign trip since Americans voted in the midterm elections, the bleak weather in Paris appears to have matched the diplomatic mood. The U.S. president seemed subdued during his visit to mark the centenary of the truce that ended World War One, and insulted many Europeans when rain and traffic were cited as the reason for cancelling one of his visits to an American war cemetery.

Trump’s mood may have reflected his irritation at his Republican Party’s loss of control of the House of Representatives during the Nov. 6 congressional vote. However, Republican gains in the Senate, along with the lack of an obvious Democratic frontrunner to challenge him – at least for now – underscores the fact that the rest of the world has to accept that he might be re-elected in 2020. For leaders in Europe and beyond, that means planning for an ongoing world without wholehearted U.S. support, as well as a series of perhaps evermore tetchy meetings with a president where all sides find it ever harder to conceal any mutual loathing.

The divide in Paris between Trump and French host President Emanuel Macron and German counterpart Angela Merkel was striking in the extreme. Trump sat largely stony-faced through Macron’s speech that lambasted “nationalism” in a remarkably naked assault on the U.S. president and his worldview.

The happiest meeting of the summit, at least judged by smiles and handshakes, was that between Trump and Russian President Vladimir Putin, another reminder of just how much more comfortable the U.S. leader often appears with dictators and strongmen rather than more democratic, centrist figures.

Like his effusive summit with Putin in Helsinki in July, the encounter suggested that Trump does not intend to let the official investigation into Russia’s election meddling during the 2016 presidential election dictate how he will handle meetings with the Russian president.

The optics in France may not particularly worry Trump. As his tweets from the Armistice Day ceremony demonstrate, he remains at least as focused on domestic U.S. politics as events elsewhere. Starting and sustaining spats with Western liberal politicians, he gives every appearance of thinking, does him no harm with his Republican political base. Those leaders who attack him most, he knows – particularly France’s Macron and Canadian Prime Minister Justin Trudeau – are also playing to their own political bases when they do so.

That will become more of a problem for Trump over time – despite his protectionist instincts and those of many of his supporters, his administration will need to work with other major nations to achieve international effects. Without that, the United States will inevitably see its influence continue to wane in most areas of the world, from the Middle East to Southeast Asia, sub-Saharan Africa, Latin America and beyond.

But the truce centenary commemoration did more than show how Trump and Putin are the two figures most at odds with the European mainstream. A consummate showman himself, Macron delivered a weekend designed to showcase himself as the proponent of a different, much more internationalist worldview to his U.S. counterpart. The truth, though, is that even within the continent, that narrative is increasingly contested. When world leaders come back together for the G20 in Argentina later this month, it will be progressive Western leaders like Macron, Merkel and Trudeau who risk appearing most isolated and out of touch.

The G20 will bring together leaders from nations that include some that are increasingly adopting a Trump-like brand of aggressive nationalism and where attacks on independent media and minorities appear to be gaining ground. New Brazilian President Jair Bolsonaro now takes his place on that list, alongside Indian Prime Minister Narendra Modi, Turkish President Tayyip Erdogan, and, of course, Putin and China’s Xi Jinping. It’s a different question, however, as to whether that group can truly agree amongst themselves. If anything, the summit may simply serve to highlight their own differences. 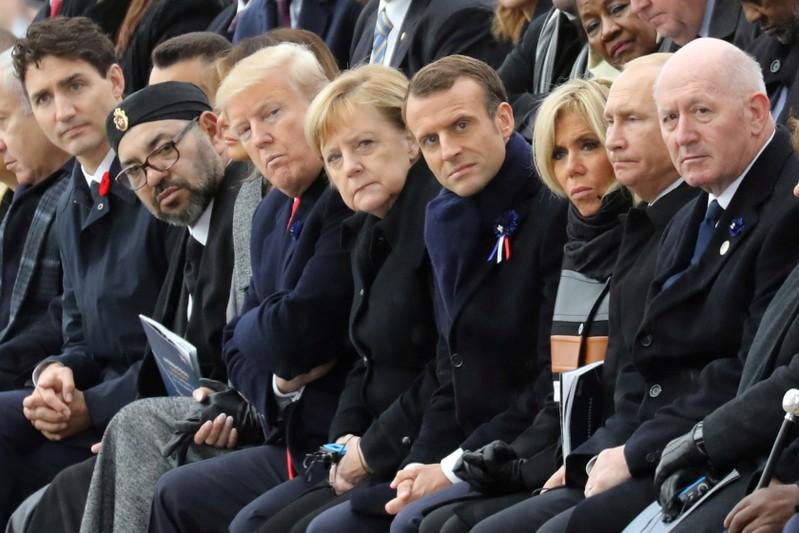 China and the United States are locked in a confrontation over trade, while opposition from Congress makes it difficult for Trump to move too close to Moscow. That leaves plenty of opportunity for new diplomatic fireworks – although the breadth of views at the G20 makes it unlikely that there will be a repeat of this year’s G7 dynamic, which saw Trump isolated in the face of European and Canadian opposition. In Argentina, the U.S. president should at least be able to find himself the occasional ally.

The overarching lesson of the World War One gathering, however, is about the perception of declining American relevance. In truth, events in Paris would have been largely unaltered had Trump chosen not to show up at all.

There are disturbing parallels to a century ago, when U.S. non-involvement in the League of Nations helped undermine a fledgling international system in the aftermath of that catastrophic war. It took a mere two decades for the world to unravel into the next conflagration. In a perhaps faster moving new century, that’s an alarming thought.

Opinion | Why 2018 Was the Best Year in Human History!