Home » Analysis & Comment » Commentary: The power and the glory of Mexico’s populist president

If you really want to understand contemporary Mexico, skip “Narcos” and watch the series “Un Extraño Enemigo” instead. The drama about the horrifying crackdown on the student movement on the eve of the 1968 Mexico City Olympics captures the essence of one-party authoritarianism under the long-ruling PRI, the Institutional Revolutionary Party. Its characters are the commander of internal security forces, student protest leaders, the slithery CIA station chief, then-president Gustavo Díaz Ordaz, and the cabinet members jockeying to succeed him. But at heart, the protagonist of “Enemigo” is the unvarnished, omnipotent power radiating from the presidency. 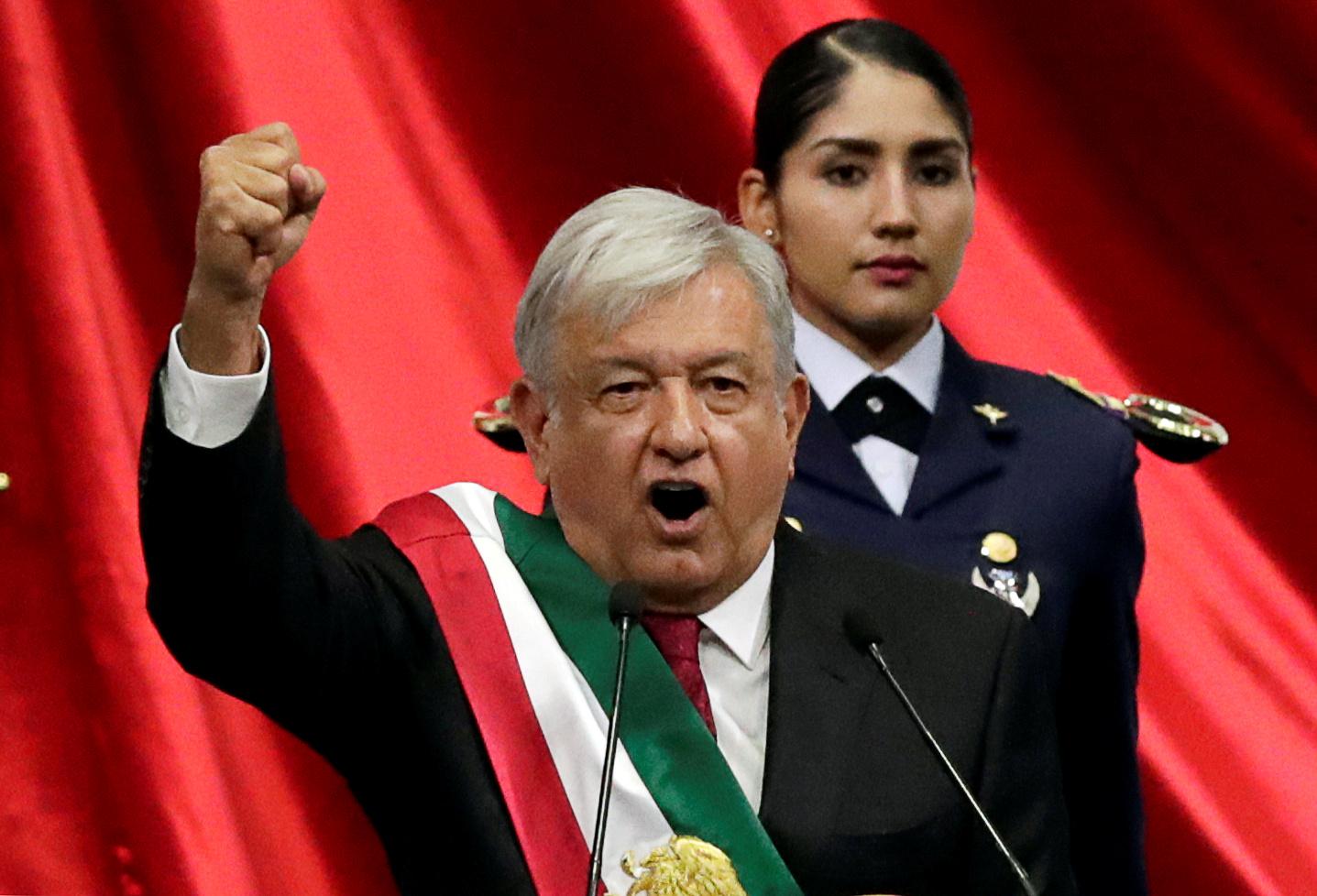 “Enemigo” may seem like an odd introduction to the era of Andrés Manuel López Obrador (known as AMLO), the populist Mexican president sworn into office on Saturday to succeed PRI president Enrique Peña Nieto. AMLO says he is assuming power to represent Mexico’s powerless, the millions left behind by the nation’s fitful modernization. And one of the central paradoxes of populism, even in its well-intentioned version, is that it takes an awful lot of power and force to vindicate the interests of the powerless against entrenched elites. AMLO is determined to reconstitute the awesome power of the presidency, not to crack down on the disaffected left as Díaz Ordaz did, but to champion it.

Mexico opened up to the outside world a generation ago, the generation between the period depicted in ”Un Extraño Enemigo” (“An Unknown Enemy”) and the current moment, embracing free trade and an electoral democracy. The results were positive for Mexico’s educated elite, and for the considerable number of families who joined the global middle class and turned the country into a massive buyer of U.S. goods. Voters invested in the steady development of this more globalized Mexico turned down AMLO’s retro vision of a more statist, self-contained Mexico in the 2006 and 2012 elections. He finally won on his third try in July, an unexpectedly resounding, mandate-conferring triumph, as a result of previous governments’ failure to broaden and deepen development, not only to lift more Mexicans out of poverty, but to temper rampant corruption and establish peace and the rule of law in the parts of the country rendered ungovernable by violence and insecurity. The gap between the country’s First World modernity and connectivity in some parts of its economy, and its Third World inequality and governance in too many areas, had become too glaring, too unsustainable. And so plenty of centrist independent-minded voters decided to roll the dice on the populist candidate clamoring for the interests of “the people” all these years, figuring that he might close the gap without necessarily being able to reverse Mexico’s decades-long opening to the outside world.

These voters might be proven wrong. As AMLO said in his inaugural address in the Mexican Congress, his will be a “profound and radical transformation” of Mexico. By winning substantial majorities in both chambers of Congress and in a majority of state legislatures for his “Morena” movement, AMLO will preside in a manner more reminiscent of Classic PRI all-powerful rulers than more recent presidents, pursuing what he immodestly has coined the country’s “Fourth Transformation” (the third, if you’re wondering, was the revolution of 1910).

In a speech at the “AMLOfest” in Mexico City’s iconic Zócalo (the city’s main square) that followed his swearing-in, the new president went through a mind-numbing recitation of 100 campaign promises that he will now act upon (#42, no government official will be able to close down streets, ignore red lights, or park illegally!). Many of his more popular pledges have been about cracking down on the corruption, impunity and privilege of those AMLO decries as the “power mafias.” He is abolishing pensions for ex-presidents, selling the presidential Boeing 787, reassigning the commander-in-chief’s security detail, refusing to live in the presidential mansion, and cutting the pay of some senior federal employees. The popularity of this ostentatious austerity is understandable, but it also represents an assertion of power, a move to transcend established institutional norms and practices and make clear who gets to set the rules.

AMLO’s most decisive act during the transition was to signal to the nation’s globalized elite that they’d be grounded until certain things changed in the country. The president-elect in October scrapped plans for a new $13 billion international airport outside Mexico City, never mind the fact that construction had begun back in 2015, contracts had been signed, commitments made, and experts insisted it was needed. AMLO had railed against the project as candidate and his dislike for it was ratified by an impromptu “consulta popular,” an informal pop-up referendum he organized to allow “the people” to weigh in. That move, and AMLO’s admonition that such consultas displacing technocratic governance will become the new normal (including the alarming promise of a biennial vote for people to weigh in on whether he should stay in office), triggered a decline in the Mexican stock market and in the value of the peso. But on Sunday, a day after the inaugural euphoria, reports surfaced that the government would proceed for now with the new airport’s financing and work until it had a better handle on the legal consequences of pulling the plug.

AMLO is also establishing an office of federal “super delegate” in each state to coordinate federal spending, alarming remaining non-Morena governors who see in this a usurpation of their sovereignty. After flirting with the idea of an amnesty for drug traffickers during his campaign, AMLO shocked his own base after the election by proposing a new National Guard to take on the fight (subject to an upcoming consulta, of course). Conversely, after spending much of his campaign promising to make the ruling “power mafias” accountable for their past corruption, AMLO is now saying he isn’t inclined to prioritize such prosecutions, for the sake of national unity. Sometimes, power is asserted through magnanimous restraint.

Depending on who you ask, AMLO is a cagey pragmatist or a determined ideologue, an amiable uncle or a steely father. But as a man who learned his politics as a young PRI man in the era of ”Un Extraño Enemigo” (before subsequently breaking with the party), there is no doubting his masterful understanding of power.

Mexico’s recent opening to the world will not be overturned overnight, or possibly at all. Despite his years attacking the North American Free Trade Agreement, AMLO as president-elect blessed the signing of its modest revision by his predecessor in Buenos Aires last Friday. AMLO has also signaled he is in no rush to overturn the energy reforms his movement so strenuously opposed, though he says certain aspects might need to be revisited. On both the night he was elected and the day he was sworn in, AMLO reassured financial markets by insisting that he would respect the independence of the central bank. But as Mariana Campero, executive director of the COMEXI think tank in Mexico City, pointed out to me recently, that statement could be read in a different light, as an assertion that it is up to the president whether to deign to respect the bank’s independence… or not.

It’s in his interactions with the media that AMLO seems most intent on stoking class resentments to refute the legitimacy of opposition and criticism. His version of discounting bad press as “fake news” is to mock “la prensa fifí,” a curiously dated term that connotes an affinity for fancy, Frenchy living. In October, AMLO said the term harkened back to the conservative press’ support for the dictator Porfirio Díaz and its opposition to the 1910 Revolution. It was a telling leap: equating any critical AMLO coverage with opposition to the fabled 1910 revolution by Díaz cronies.

That could soon change, of course. Mexico’s economy, whether AMLO likes it or not, remains tethered to the American market. Donald Trump’s constant rants against Mexico and its immigrants, and U.S. companies that invest in the country, will likely provoke a sharper response from AMLO than from his predecessor. Restraint has its limits, and the colossus to the north will make a handy scapegoat if and when the Fourth Transformation hits any speed bumps.

Opinion | More Schools and Fewer Tanks for the Mideast