We’re covering new details about the unrest in Iran, the dwindling Democratic presidential field, and the arrest of suspects in a massacre last month in Mexico.

President Trump said he would reinstate tariffs on steel and aluminum from Brazil and Argentina, accusing the countries of artificially weakening their currencies and hurting American farmers.

Trade deal is a quandary for Democrats

The Trump administration reached an agreement with Canada and Mexico on revisions to the North American Free Trade Agreement last year, but the deal still needs the approval of Congress.

As lawmakers return to Washington today, the question for Democrats is whether to back the deal and give President Trump a victory in the midst of the impeachment investigation.

The details: The deal is more progressive than traditional Republican views on trade and includes measures that Democrats have long sought. Those include requiring more of cars’ parts to be made in North America, rolling back a special system of arbitration for corporations and strengthening Mexican labor unions.

Another angle: Lawyers for Mr. Trump said on Sunday that they wouldn’t participate in the House Judiciary Committee’s first public impeachment hearing this week. 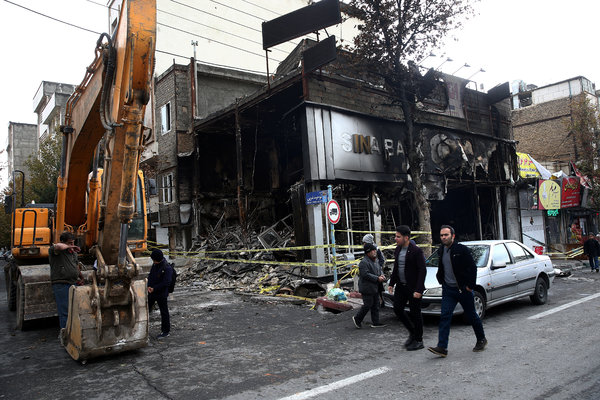 Behind the deadly crackdown in Iran

At least 180 people — and possibly hundreds more — have been killed in the past few weeks in some of the worst political unrest in Iran since the Islamic Revolution 40 years ago.

Protests erupted after a steep increase in the price of gas was announced on Nov. 15. In the resulting government crackdown, Iranian security forces opened fire on the demonstrators. The scope of the violence is now becoming clear after an internet blackout was lifted.

The authorities have not disclosed the number of casualties and arrests, and have denounced unofficial figures on the death toll as speculative.

Many Iranians have directed their hostility at the country’s supreme leader, Ayatollah Ali Khamenei, who called the response a justified reaction to a plot by Iran’s enemies.

Another angle: In Iraq, the formation of a new government will probably take weeks, if not months, after the resignation of Prime Minister Adel Abdul Mahdi over the weekend. He faced widespread anger over political corruption and Iran’s influence over Iraqi politics.

The former vice president might lose the first Democratic contests in Iowa and New Hampshire, but if he maintains his strength with black voters, he will have a structural advantage that’s greater than his uneven polling lead suggests.

Under party rules, more delegates are awarded in districts with high concentrations of Democrats. Because black people overwhelmingly vote Democratic, areas with many black residents tend to have higher numbers of Democratic delegates.

A recent poll showed Mr. Biden at 44 percent among black voters in South Carolina, which has historically been a harbinger for how the South as a whole will vote. The same poll showed his closest competitor, Bernie Sanders, trailing him by more than 30 percentage points among black voters.

Quiz time: Who was the last Democratic presidential candidate to win the nomination without winning a majority of black voters? The answer is at the end of the briefing.

Related: Gov. Steve Bullock of Montana and Representative Joe Sestak of Pennsylvania have dropped out of the race.

As Queen Elizabeth II welcomes world leaders to London this week to observe the 70th anniversary of NATO, the royal family is at a turning point.

Prince Charles, the son and heir of the 93-year-old queen, has recently moved to take a greater role in royal affairs. Most notably, he pressed to strip his younger brother Prince Andrew of his public duties after Andrew gave a disastrous TV interview about his friendship with the convicted pedophile Jeffrey Epstein.

Quotable: “The monarchy is a rock of stability that has served this country well in times of crisis,” said Penny Junor, a royal biographer. “But we’re coming to the end of a pretty troubled year, which adds to the woes of the family.”

Related: The deliberately low-key NATO celebration comes amid a wariness about what President Trump might say. Last year, he considered withdrawing the U.S. from the military alliance.

The Weekly: The latest episode of The Times’s TV show is about Mr. Epstein and two of America’s top lawyers. Read behind-the-scenes notes about the episode, which is available on FX and Hulu.

‘We could have been anything’

The Class of 2000 at Minford High School in Ohio started classes the year Purdue Pharma introduced OxyContin. By senior year, the painkillers were everywhere, in classrooms, school bathrooms and parties.

To understand the scope and the consequences of the opioid crisis, The Times talked to dozens of members of the class, many of whose lives have been affected by addiction. Since they graduated, more than 400,000 Americans have died from opioid overdoses.

Arrests in Mexico: Several suspects were detained in connection with the killings of nine members of a Mormon sect in the north of the country last month.

Supreme Court and guns: The justices are set to hear a Second Amendment case today for the first time in almost a decade, during which time the court’s lineup has grown more conservative.

Resignation in Malta: Prime Minister Joseph Muscat said that he would step down in January, after questions about whether his associates were involved in the killing of a well-known journalist in 2017.

Story of survival: A woman in Australia was released from the hospital today after being stranded for 12 days in the outback.

Snapshot: Above, Times Square in New York on Sunday, when heavy snow in the Northeast snarled post-Thanksgiving travel. The storm is expected to linger into Tuesday.

From “A” to “zythum”: Researchers in Germany have been working on a Latin dictionary since the 1890s. They hope to finish by 2050.

N.F.L. results: In a matchup of two of the league’s best teams, the Baltimore Ravens edged the San Francisco 49ers, 20-17. Here’s what we learned in Week 13.

Metropolitan Diary: In this week’s column, paying with cash, wondering what a subway rider is studying and more reader tales of New York City.

What we’re looking at: National Geographic’s best photos of 2019. “Just because,” writes Steven Erlanger, our chief diplomatic correspondent in Europe. “Beauty and wonder and awe and all those things.”

Watch: We highlight the best movies and TV shows new to streaming services in the U.S. and to Netflix in Canada.

Go: An exhibition at the Louvre will celebrate the French painter Pierre Soulages’s 100th birthday. The only other artists given shows there during their lifetimes were Picasso and Chagall.

Smarter Living: A full-time employee in the U.S. will spend about 80,000 hours at work over the course of a lifetime. We have tips for when you’re considering a career change.

File this under the category “Who Knew?” The queen in chess was not always as powerful as she is today.

I’m Katharine Seelye, a longtime reporter for The Times and a chess player. I learned about the change in the queen’s power last week, while writing an obituary of Marilyn Yalom, a feminist author. Her 2004 book, “Birth of the Chess Queen: A History,” describes the queen’s evolution from weakest piece on the board to mistress of the universe.

When the game was first played in the sixth century in India and the Arab world, the chess queen did not exist.

But in real life, powerful queens — see Eleanor of Aquitaine in the 12th century and Isabella I of Castile in the 15th — would come to make their mark.

Ms. Yalom posits that those examples inspired game makers to reflect such power on the board. Initially, the queen could move only one square, on the diagonal.

In time, the queen was granted superpowers and became the mightiest of all — at least in chess.

That’s it for this briefing.

The answer to the quiz question above: The last Democratic candidate to win the nomination without winning a majority of black voters was Michael Dukakis, then the governor of Massachusetts, in 1988.

See you next time.

Thank you
Mark Josephson and Eleanor Stanford provided the break from the news. You can reach the team at briefing@nytimes.com.

P.S.
• We’re listening to “The Daily.” Today’s episode is about the aggressive methods some hospitals use to force patients to pay.
• Here’s today’s Mini Crossword, and a clue: August is the only month that ends with one (three letters). You can find all our puzzles here.
• Reporters and editors at The Times recently shared some examples of important local reporting from other news organizations.