We’re covering President Trump’s attack on four lawmakers of color, China’s slowing economy, and the aftermath of a blackout in New York. 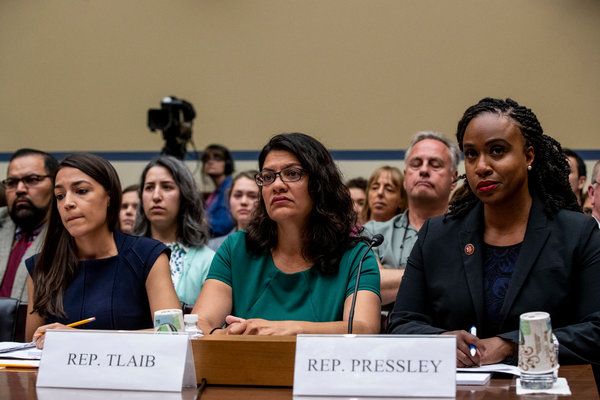 The president said on Sunday that a group of four minority congresswomen should “go back” to the countries they came from rather than “loudly and viciously telling the people of the United States” how to run the government.

Mr. Trump’s attack appeared to be directed at members of the “squad,” a group of liberal, first-term Democrats: Alexandria Ocasio-Cortez of New York, Ilhan Omar of Minnesota, Ayanna Pressley of Massachusetts and Rashida Tlaib of Michigan. Of the four, only Ms. Omar, who is from Somalia, was born outside the U.S.

Speaker Nancy Pelosi, who has been engaged in a war of words with the young lawmakers, defended them, saying Mr. Trump’s campaign slogan, “Make America Great Again,” “has always been about making America white again.”

News analysis: Ahead of next year’s election, Mr. Trump “appears to be drawing a deep line between the white, native-born America of his memory and the ethnically diverse, increasingly foreign-born country he is presiding over,” our chief White House correspondent writes.

Tell us: Have you been told to “go back” to your country even though you’re an American? The Times wants to hear from you.

The country’s growth fell to its slowest pace in nearly three decades, officials said today, as trade tensions with the U.S. and other financial problems take a growing toll on the world’s second-largest economy.

China’s economy grew 6.2 percent in the second quarter compared with a year earlier. Most of the world would envy such a rate, but it was the slowest there since 1992. The number may also understate the extent of the slowdown — many economists doubt its veracity.

Another angle: Prime Minister Shinzo Abe of Japan has recently moved to limit trade with South Korea, taking a page from President Trump and citing concerns about national security.

In 1974, a federal court in Delaware was on the verge of ordering busing to integrate Wilmington’s overwhelmingly black public schools. Mr. Biden, the state’s newly elected member of Congress, had cast votes to protect the practice of busing, but he later led an effort in the Senate to end it.

That advocacy now clouds the early stages of Mr. Biden’s 2020 presidential run, after a campaign rival, Senator Kamala Harris, attacked his position. The former vice president has said that his record on school desegregation has been misrepresented, but a Times review suggests that his opposition to busing was far more sweeping than he has led voters to believe.

How we know: The Times examined hundreds of pages of congressional records, as well as interviewing education experts and contemporaries of Mr. Biden in Wilmington and Washington. He declined to be interviewed for this article.

When the country’s longtime ruler, Omar Hassan al-Bashir, was ousted in April, protesters wanted immediate civilian rule. But the military refused to cede power, and a seven-week standoff ensued, followed by a deadly crackdown last month.

Declan Walsh, a Times correspondent based in Cairo, has visited Sudan for the past 20 years and recently met with Gen. Mohammed Hamdan, known as Hemeti, whose troops led the crackdown. Read his report from Khartoum, the capital.

Quotable: “We’ve been ruled by dictatorships for over 50 years. We can’t accept another one,” said Mohamed al-Asam, a 28-year-old doctor turned revolutionary who spent three months in jail under Mr. al-Bashir.

Companies around the world are racing to build cutting-edge facial recognition systems, and they’re scooping up images of faces from social networks, dating services and even surveillance cameras in restaurants and colleges.

And there is no oversight of these vast databases.

Immigration raids begin: A handful of federal raids targeting undocumented migrants took place over the weekend. The authorities said that more would follow.

Political turmoil in Puerto Rico: Two members of Gov. Ricardo Rosselló’s cabinet stepped down after the publication of derisive messages sent by the governor and some of his aides.

New York blackout: Consolidated Edison apologized for a power failure that affected much of the West Side of Manhattan over the weekend, but offered few clues as to its cause.

Moonshot is delayed: India called off the launch of a lunar mission today after an unexplained technical problem. The country is seeking to become the fourth to successfully land a spacecraft on the moon.

Monday’s Must-Reads: Here are five great stories you may have missed over the weekend, including a look at Pete Buttigieg’s life before he came out as gay.

Snapshot: Above, Novak Djokovic celebrating his win over Roger Federer on Sunday in the longest men’s singles final at Wimbledon. The nearly five-hour match was the tennis tournament’s first championship to be decided by a fifth-set tiebreaker.

What we’re reading: This article in Topic Magazine. Kim Severson, a national food correspondent, recommends it, writing: “Madeline Leung Coleman traces the rise of the $3 billion energy bar business, from its birthplace on the battlefield to the great bar wars of the 1990s to its current ubiquity as a totem of both wellness and life too busy for lunch.”

Watch: Casts of Broadway shows that were closed by Saturday’s blackout in New York performed for their audiences on the sidewalk.

Listen: “Personal Hell,” by the German-born pop singer Kim Petras, sounds simultaneously like a nursery rhyme and a tragic faux opera. Her debut album is our critic’s pick.

Go: New places for glamping — high-end camping — are opening in the U.S., Bolivia and Costa Rica.

Smarter Living: Deciding when — and whether — to disclose a disability to a potential employer isn’t easy. In the U.S., employers are prohibited from directly asking about a disability or discriminating on the basis of one, but it happens anyway. Before you explain, prepare ideas for workarounds for any tasks you might not feel comfortable taking on.

We also have a guide to eclipses, supermoons and other lunar events in honor of the 50th anniversary of the Apollo 11 launch on Tuesday.

To buy or not to buy

Amazon expects to take in billions of dollars and sign up more Prime members over the 48-hour event. Wirecutter, a Times Company site, will be sorting through the deals for you.

For recovering shopaholics, the Amazon sale is something else entirely.

“It’s like the Super Bowl if you’re an alcoholic,” said Terrence Shulman, who runs a support group for compulsive spenders. “This is going to be a challenge for people.”

Last year on Prime Day, one member of Mr. Shulman’s network, a 63-year-old woman from Georgia, spent around $400, shelling out for discounted gardening shears and satin pillowcases. “I could’ve done without those,” she acknowledged.

This year, she has a plan: no browsing, just checking for discounts on items already on her Amazon shopping list.

Thank you
To Mark Josephson and Eleanor Stanford for the break from the news. David Yaffe-Bellany, a business reporter, wrote today’s Back Story. You can reach the team at [email protected]

P.S.
• We’re listening to “The Daily.” Today’s episode is about the immigration raids.
• Here’s today’s Mini Crossword puzzle, and a clue: Throat-clearing noise (four letters). You can find all our puzzles here.
• We collected a sample of the responses from black readers who work in the arts to a recent article in The Times about the frustrations of African-American filmmakers.