We’re covering the latest testimony in the impeachment investigation, a growing crisis involving detainees in northern Syria, and a potential computing milestone.

The bodies of 39 people were found in a truck in an industrial park east of London today. The driver has been arrested on suspicion of murder. 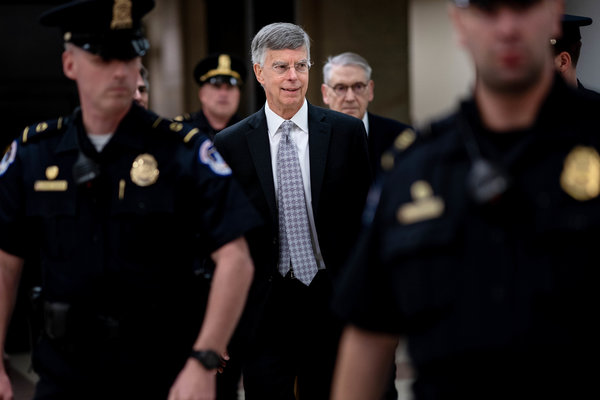 Multiple senior administration officials said that President Trump had blocked military aid to Ukraine until the country’s leader agreed to investigate Mr. Trump’s political rivals, according to testimony on Tuesday by the top American diplomat in Kiev.

The envoy, William Taylor, told House investigators in detail about an arrangement that Mr. Trump and his allies have long denied. Read Mr. Taylor’s opening statement and six revelations from his testimony.

Before Mr. Taylor’s appearance in Congress, the president denounced the investigation as a “lynching.”

News analysis: The testimony by Mr. Taylor was “by far the most damning account yet to become public” in the impeachment inquiry, our chief White House correspondent writes.

The Daily: Today’s episode is about the testimony.

Another angle: The anonymous White House official who wrote a Times Op-Ed last year about resisting the president’s agenda will publish a book next month. The author will remain unnamed.

Inside ISIS prisons in Syria

Tens of thousands of people thought to be Islamic State members and their families are being held in territory once controlled by Kurds, and their fate has become increasingly uncertain after Turkey’s military incursion.

The detainees are from a variety of countries, most of which have refused to take them back, fearing that they might spread extremist doctrine. Instead, the prisoners have been left in the custody of a Kurdish-led force that lacks the resources to deal with them.

A visit to two prisons this week by Times journalists underscored a growing legal and humanitarian crisis.

Related: Turkey said today that it would advance no further into a Kurdish-controlled area in northern Syria, after a deal between the Turkish and Russian governments.

The company said today that it had achieved “quantum supremacy,” a milestone that would make current supercomputers look like toys.

At a research lab in California, a mathematical calculation that the largest supercomputers could not complete in under 10,000 years was done in 3 minutes 20 seconds, Google said in a paper in the science journal Nature.

Background: Our reporter Dennis Overbye explains: “Ordinary computers store data and perform computations as a series of bits that are either 1 or 0. By contrast, a quantum computer uses qubits, which can be 1 and 0 at the same time, at least until they are measured.”

What’s next: Scientists likened the announcement to the Wright brothers’ first flight in 1903 — proof that something is possible even though it may be years before it can fulfill its potential.

Brexit clears a hurdle, then hits a wall

Lawmakers approved the broad outlines of Mr. Johnson’s plan — his first victory in Parliament after a string of defeats — but then voted down an effort to fast-track the legislation.

What’s next: Brussels must now decide on an extension. If a delay stretches into next year, Mr. Johnson has said that he might pull the bill and call an election, figuring that he could win a mandate for a swift Brexit.

Can you be addicted to video games?

In May, the World Health Organization officially recognized “gaming disorder” as an addictive behavior, a classification that has been disputed by scientists and, predictably, the video game industry.

The Times Magazine examined the debate, at the center of which is a shifting scientific understanding of addiction itself.

Boeing ousts executive: The departure of the head of the company’s commercial airplanes division is Boeing’s most direct effort to hold a senior leader accountable for the crisis after two deadly crashes.

Rift in Canada: Election results showed that, as in other Western nations, an urban versus rural split and increasing regionalism have taken hold in a country known for social cohesion.

Mark Zuckerberg’s testimony: Facebook’s chief executive is expected to acknowledge that his company has trust issues during an appearance in Congress today to discuss the social network’s cryptocurrency project.

Hong Kong extradition bill: The government today formally withdrew the measure that prompted months of protests, and the murder suspect whose case led to the bill was released. But neither the political crisis nor the case is close to resolution.

From The Times: Debatable, from the Opinion section, provides a range of perspectives on the most talked-about disagreements. Today’s topic: the opioid crisis and the courts.

Snapshot: Above, the Impossible Burger, part of a new generation of plant-based patties. How do they taste? The Times tested six.

52 Places traveler: In his latest dispatch, our columnist has a memorable time in Gambia, an unheralded corner of West Africa.

Late-night comedy: The hosts were looking forward to December: “The Hallmark Channel has already jumped on it with yet another new holiday movie, ‘Impeachment in a Pear Tree,’” James Corden said.

What we’re reading: This Esquire article about the failed restart of Gawker, the once insatiable news site. “The behind-the-scenes look is delicious,” writes Remy Tumin of the briefings team.

Go: A revival of “For Colored Girls Who Have Considered Suicide/When the Rainbow Is Enuf,” is a testament to sisterhood, our critic writes. It opened Tuesday at the Public Theater in Manhattan.

Eat: Tagalog lessons begin the meal at Tsismis, a Filipino restaurant on the Lower East Side. Read our review.

Smarter Living: How old are you? How old do you feel? Scientists found that people who feel younger than their chronological age are typically healthier and more psychologically resilient.

Regardless of your age, it’s good to have a will. Here’s what you need to know about electronic wills.

The WeWork co-founder Adam Neumann will get a huge payout as part of a deal that will give control of the co-working start-up to its Japanese investor, SoftBank — a move that some described as an enormous “golden parachute.”

The phrase dates from 1961, and initially described a contract clause designed to ensure that a top executive would get paid in the event of a corporate takeover. “Equipped with this safety device, an executive who is shoved out the door by a new owner will be cushioned by a tidy pile of cash,” the Times reporter N. R. Kleinfield wrote in 1982.

The definition has become broader over the years, and has come to mean any large corporate severance payout, especially if the executive in question has a tarnished reputation.

Where does Mr. Neumann rank in the annals of golden parachutes? It depends on how you measure his payout, which includes a line of credit and the ability to sell some of his shares to SoftBank. But the co-founder’s “consulting fee” of $185 million, on its own, ranks among the biggest corporate exit payouts ever.

Thank you
Melina Delkic helped compile today’s briefing. Mark Josephson and Eleanor Stanford provided the break from the news. Adam Pasick, on the briefings team, wrote today’s Back Story. You can reach us at [email protected]

P.S.
• We’re listening to “The Daily.” Today’s episode is about William Taylor’s testimony in the impeachment investigation.
• Here’s today’s Mini Crossword, and a clue: What gossipy people love to stir up (five letters). You can find all our puzzles here.
• For nearly a decade, Brian Rea, an illustrator for The Times, has drawn the distinctive images that appear in our Modern Love columns. He discussed how he does it.

Opinion | Your Kids Aren’t Too Old for Picture Books, and Neither Are You

Opinion | Where Spying Is the Law