Home » Analysis & Comment » How to Double the Vaccination Pace

The development of the Covid-19 vaccines happened with great urgency, for obvious reasons.

One of the timesaving techniques by Moderna and Pfizer involved scheduling the two vaccine doses fairly close together — just three or four weeks apart — during the research trials. The companies did not test multiple gaps between the two shots to see which was the most effective. They each chose a short gap to finish the trials as quickly as possible.

The decision made a lot of sense. It allowed the U.S. mass vaccination program to start in December, rather than pushing it back a few months. Many lives have been saved as a result.

But the approach means that nobody knows what is the most effective gap between the two shots. Maybe it really is three to four weeks. Maybe a longer delay is just as effective (or, for that matter, even more effective).

And the short delay does come with a large downside.

The U.S. is choosing to give millions of people a second shot while making millions of others wait for their first. That’s happening even though a single shot provides a high degree of protection and even as a more severe, contagious coronavirus variant is sweeping the country. Both cases and hospitalizations have risen in recent days, and deaths have stopped declining.

In response, a growing number of medical experts are calling on the Biden administration or governors to change policy and prioritize first doses:

“We’ve missed a window, and people have died,” Sarah Cobey of the University of Chicago told my colleague Carl Zimmer.

“Getting as many people as possible a vax dose is now urgent,” Dr. Atul Gawande, the surgeon and medical writer, tweeted.

“We need to get more people vaccinated,” Dr. Ezekiel Emanuel of the University of Pennsylvania told me.

In a USA Today op-ed, Emanuel, Govind Persad and Dr. William Parker argue that spreading out the first and second shots would be both more equitable and more efficient. It’s more equitable because working-class, Black and Latino communities all have lower vaccination rates, which means that first shots disproportionately now go to the less privileged and second shots go to the more privileged. It’s more efficient because a delay in second shots would allow the country to double the number of people who receive a first shot in coming weeks.

Doing so could prevent other states from experiencing the current misery in Michigan, where a severe outbreak fueled by the B.1.1.7 variant has overwhelmed hospitals. In much of the South and the West, the variant is not yet as widespread.

The biggest worry about a longer delay between shots is that it may allow a new variant to develop in people while they are waiting for their second shot and do not yet have full protection. Dr. Anthony Fauci, the top Biden administration adviser, opposes a longer delay largely because of this possibility.

There is real-world evidence — from Britain — showing large benefits from maximizing the number of people who get one shot.

Britain and the U.S. have now given a roughly similar number of total shots per capita. The difference is that Britain has deliberately delayed second shots, by up to 12 weeks. The results are impressive.

Despite being the country where the B.1.1.7 variant was first detected, Britain now has the pandemic under better control than the U.S. does. Both cases and deaths have fallen more sharply, highlighting the power of a single vaccine dose. “The levels of antibodies after the first shot are sky-high,” Dr. Robert Wachter of the University of California, San Francisco, told me. 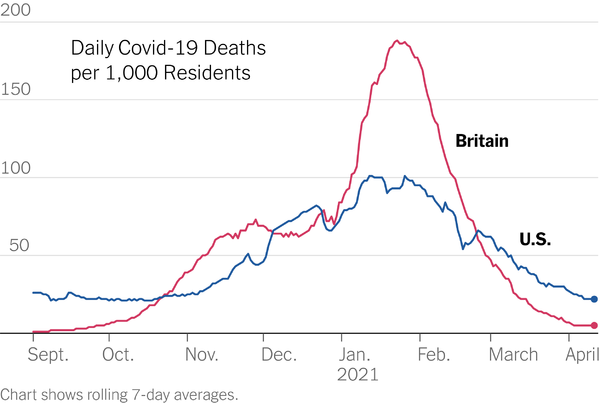 Britain’s experience also offers some comfort that delaying second shots will not spur variants: There have been no reports of dangerous new variants emerging since vaccinations began, Emanuel noted. (B.1.1.7 sprung up much earlier.) If anything, Britain’s “one-jab” strategy may be making variants less likely. “There are fewer infected people in which variants can arise,” Cobey said.

England’s top medical official, Dr. Chris Whitty, has called the possibility that delaying second shots would lead to new variants a “real worry but quite a small real worry.”

A few weeks ago, I was concerned that changing to a different vaccination schedule might not be worth the confusion and uncertainty it could cause. But I find the latest arguments to be strong. The costs of switching are almost all hypothetical. The benefits are concrete.

President Biden and his aides are fond of saying that they “follow the science” when setting Covid policy. Their current definition of the science, however, is quite narrow. It revolves almost completely around the Moderna and Pfizer trials, which didn’t test what the ideal gap between shots was. Their definition ignores the mountain of real-world evidence about the strength of a single shot.

In the meantime, about 140 million American adults — more than half — still have not received a shot. The country has made a deliberate choice not to reduce that number as quickly as possible.

England began to emerge from its lockdown, opening gyms, shops and outdoor dining.

Federal officials said they would not send additional vaccines to Michigan and advised the state to enact new restrictions.

The officer who fatally shot Daunte Wright, a 20-year-old Black man, in Brooklyn Center, Minn., on Sunday fired her gun by accident, thinking it was her Taser, an official said. (These are the differences between Tasers and guns.)

Officials identified the officer as Kim Potter, a veteran of the Brooklyn Center Police Department.

Hundreds of protesters defied a 7 p.m. curfew, and the police used tear gas to disperse them. The demonstrations dissipated around midnight.

The shooting “took place in a region already at the center of a national reckoning over police officers’ use of force against Black people,” The Times’s Nicholas Bogel-Burroughs, Julie Bosman and Shawn Hubler write.

Two prominent Black executives are trying to organize corporate opposition to new voting restrictions. And a movie financed by Apple pulled its production from Georgia.

The heads of Google, Walmart and hundreds of other businesses urged Biden to set a more ambitious goal for cutting planet-warming emissions.

The White House has said almost nothing publicly after an explosion and blackout at a nuclear enrichment site in Iran, asserting it had no involvement.

Women and men who have worked in Albany — including aides, lobbyists and elected leaders — said New York’s capital was rife with sexual harassment and misogyny.

A prominent Catholic school in Manhattan fired its president after an investigation found he had engaged in sexual misconduct with multiple adults.

‘The numbers are just crushing’: NFTs are selling for millions. Are they warming the planet?

Lives Lived: The anthropologist Marshall D. Sahlins explored how individuals shape and are shaped by their cultures, a point he put in practice as the inventor of the “teach-in” against the Vietnam War. Sahlins died at 90.

The women who made NPR

A half-century ago, National Public Radio was a struggling start-up. Because it lacked the resources of its more established rivals, it hired good journalists who couldn’t find jobs elsewhere — many of whom were women. “You couldn’t get a man to work for what we worked for in the early days,” Nina Totenberg, an early NPR employee, said on “Fresh Air” last year.

Totenberg was one of four female journalists — along with Susan Stamberg, Linda Wertheimer and Cokie Roberts — who arrived at NPR in the 1970s and helped shape it. Lisa Napoli tells their story in a new book, “Susan, Linda, Nina & Cokie.” (Here’s a Times review.)

“It was so much fun, maybe more fun than I ever had in my life, because we were inventing something new with almost no resources,” Stamberg said in an interview with Next Avenue.

This pasta primavera with asparagus is a celebration of spring.

In times of uncertainty, trivia has the power to provide answers.

After Anthony Bourdain’s death, his longtime assistant was left to finish his last book. “World Travel: An Irreverent Guide” comes out next week, and it’s “an enduring embodiment of Anthony Bourdain’s love for the whole world,” Sebastian Modak writes in The Times.

The hosts got serious about police brutality.

The pangrams from yesterday’s Spelling Bee were rowdily and wordily. Here is today’s puzzle — or you can play online.

P.S. A hidden haiku from a Times article about a year without queer spaces: “We could see our breath, / a tiny reminder of / the changing seasons.”

Today’s episode of “The Daily” is about NFTs. “The Improvement Association,” a new podcast from the makers of “Serial,” investigates election fraud in North Carolina.

Billy Keane: 'The Tipperary trial that could have been named 'The Field 2''