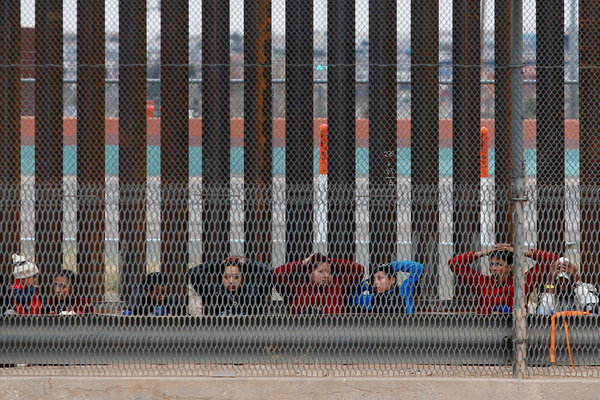 1. President Trump is taking his case for a wall to El Paso, where there is one, above.

His rally tonight, set for 7 p.m. local time (9 p.m. Eastern), is his first event along the border since a debate over funding a wall shut down the government. We’ll be there. Negotiations to head off another shutdown as of Friday midnight are in danger of collapse.

In a twist of political theater, Beto O’Rourke, a former Democratic congressman from El Paso and possible presidential candidate, will speak at a rally less than a mile from Mr. Trump’s. We’ll be there, too.

Ahead of the events, people across the political spectrum in El Paso had a message for the president: Don’t speak for us.

2. “Anti-Semitism is real and I am grateful for Jewish allies and colleagues who are educating me on the painful history of anti-Semitic tropes.”

That was Representative Ilhan Omar, a freshman congresswoman from Minnesota, seen above two weeks ago. She had come under fire from Speaker Nancy Pelosi and the entire House Democratic leadership for insinuating on Twitter that American support for Israel was fueled by money from a pro-Israel lobbying group.

She did not back away from her contention that the lobbying group, the American Israel Public Affairs Committee, has too much power in Washington. “At the same time, I reaffirm the problematic role of lobbyists in our politics, whether it be AIPAC, the NRA or the fossil fuel industry,” her statement said.

They insist there not be a rush to oust Mr. Fairfax, who is black, over accusations of sexual assault while the state’s white governor and attorney general are refusing to resign after they admitted wearing blackface in their youth.

Mr. Fairfax entered the legislative building around 11:30 a.m. this morning, made his way to the Senate chambers through a scrum of TV cameras, repeated that he had “called for an independent investigation,” adding: “I am still very confident in the truth.” And went to work, above.

Some of the adjectives used to describe Hillary Clinton during her 2016 presidential campaign are now bubbling up in uncharted territory: a presidential race featuring six women running for the Democratic nomination.

Few people admit they would hesitate to vote for a woman for president, but they don’t have to. We took a look at how sexism plays out on the campaign trail.

And we have closer looks at two senators among the six: Amy Klobuchar of Minnesota, above, who joined the race Sunday, and Kamala Harris, whose record as a former district attorney and California attorney general faces a chorus of critics — especially on the left.

In a new study, researchers from universities in the U.S. and China built a highly accurate system that could automatically diagnose common childhood conditions — including influenza and meningitis — after analyzing the patient’s symptoms, medical records, lab results and other clinical data.

The system used a neural network, a breed of artificial intelligence, to digest the electronic health records from more than 1.3 million patient visits at a pediatric hospital in China. Above, doctors competed against A.I. computers to recognize illnesses during a competition in Beijing last year.

Able to recognize patterns in data that humans could never identify on their own — and might not be able to understand — A.I. could assist doctors in diagnosing complex conditions, potentially transforming the health care industry and reducing the chances of misdiagnoses.

In other A.I. news, President Trump signed an executive order meant to spur the development and regulation of artificial intelligence.

6. Brandi Carlile gave a thrilling performance. Drake showed up (though his acceptance speech got cut off). Alicia Keys was a laid-back host (and deftly played two pianos at once).

We rounded up the best and worst of the Grammys, according to our music critics. At a ceremony dominated by female performers and presenters, Kacey Musgraves won album of the year for “Golden Hour,” as well as three other awards. Cardi B, above, became the first woman to win best rap album as a solo artist for “Invasion of Privacy.” Here’s the complete list of winners.

From Cardi B on the half shell to Michelle Obama in a silver lounge suit and a barefoot Alicia Keys, women were front and center, our fashion critic writes. (The embedded slide show has all the red carpet looks.)

This year’s award ceremony was perhaps as notable for who didn’t show up as who did, our pop music critic suggests.

7. The accusations against Óscar Arias Sánchez, a former president of Costa Rica and Nobel laureate, are mounting. Above, Mr. Arias last month.

Yazmín Morales is one of at least nine women who have now come forward with accounts of sexual assault or misconduct.

Telling her story was hard. Finding a lawyer to take the case was harder, revealing the social and political obstacles facing women in the region when they seek legal recourse, even in Latin America’s most significant #MeToo case.

And our Interpreter column examines why the movement has made little headway in curbing abuses by ordinary men.

8. For New Yorkers who hate the subway, and anyone who likes to hate New York, this one’s for you.

A portrait of subway hell in words and images, drawn from commuters’ tweets.

Accessibility is a key issue. There are 550,000 New York residents who have difficulty walking. Our analysis found that two-thirds of them live far from an accessible subway station.

And from Tokyo to Zurich, readers told us how New York’s subway compares with the public transportation in their cities (spoiler alert: not well).

That’s Trond Trondsen of Calgary, an expert on the aurora borealis. He grew up in Norway fascinated by the mysterious light display, and he’s not alone. Seeing it has become a must for camera-toting international tourists, whether in Russia, Alaska, Greenland or Scandinavia.

The sight can prove to be elusive, if ultimately rewarding, our writer found during a trip to northern Sweden, above. “It’s just a matter of waiting for the cosmic show,” she writes.

10. Finally, we end the day with some very good dogs.

When we began digitizing six million photos in the Times archive, it quickly became apparent that while people and places changed, the dogs stayed very much the same, providing the kind of reliable delight they now deliver on Instagram scrolls. Above, a man and his dog driving down Fifth Avenue in New York in 1977.

As the Westminster Kennel Club Dog Show kicks off, we assembled a panel of dog fans — from the Times staff to artists and animal trainers — to examine the everlasting obsession. “Dogs are just really pure,” one panelist said.

Good luck to all the groups and breeds! We’ll see you Tuesday night when best-in-show is awarded.

Have a winning night.

An earlier version of this briefing incorrectly identified Representative Ilhan Omar. She is a freshman congresswoman from Minnesota, not Michigan.

Commentary: Despite Brexit, I’m proud to be a Brit