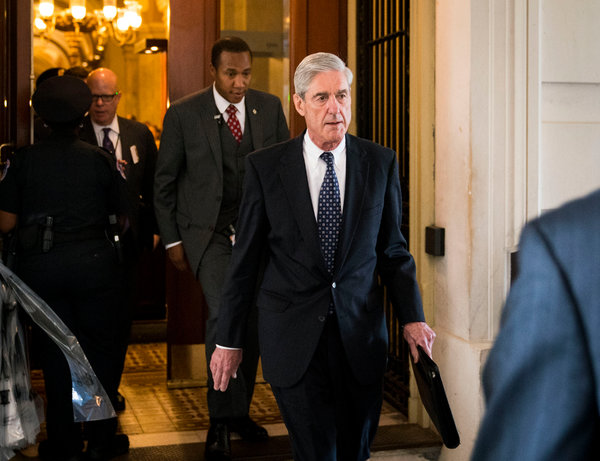 The special counsel, Robert Mueller, delivered a report on his inquiry into Russian interference in the 2016 election to Attorney General William Barr.

It was the apparent close of an investigation that has captivated the nation and cast a shadow over President Trump for nearly two years. We don’t yet know the report’s contents. Mr. Barr will now decide how much of it to share with Congress and, by extension, the public. Above, Mr. Mueller leaving the Capitol in 2017.

Mr. Mueller will not recommend that any new charges be filed, a senior Justice Department official said. Since Mr. Mueller’s appointment in 2017, a half-dozen former Trump aides have been indicted or convicted of crimes, and dozens of Russians were charged.

Find our guides to major moments in the case, and what we already know about the main findings, lines of inquiry and players.

2. The path to the report’s potential release is complicated. The House voted unanimously this month to make its findings public, and now it’s up to Attorney General William Barr, pictured above, to decide how much of it to share.

In a letter to congressional leaders, he said he might brief them within days. House Democrats are already calling for the release of not only the full report, but also the underlying documents and findings. In a joint statement, Speaker Nancy Pelosi of California and Senator Chuck Schumer of New York urged Mr. Barr not to give the White House a “sneak preview” of the report before the public can see it.

Watch our video guide to how we got here. Still have questions? Ask our reporters about the latest developments and what may come next.

3. President Trump rolled back sanctions against North Korea today, confusing advisers who had put them in place only a day earlier.

The move, announced on Twitter, was a remarkable display of dissension in the Trump administration. The Treasury announced sanctions Thursday on two Chinese shipping companies it said were helping North Korea evade international sanctions.

The sanctions came weeks after a summit meeting between Mr. Trump and Kim Jong-un, North Korea’s leader, collapsed without a nuclear deal. Above, the two leaders in Hanoi, Vietnam, in February.

4. Indonesia’s national airline wants to cancel a $4.9 billion order of dozens of Boeing 737 Max 8 jets in the wake of two deadly crashes.

The move would be the first publicly confirmed cancellation attempt since the Ethiopian Airlines crash of a Max 8 that killed 157 people. Above, planes belonging to the airline, Garuda Indonesia.

It’s unclear if the cancellation will move forward, as it is difficult to cancel such agreements once they have been signed. Few analysts expect other airlines to follow suit.

When long-term yields fall below yields on short-term bonds, it’s called a yield curve inversion. It’s one of Wall Street’s favored predictors of a recession, and these have preceded every recession over the last 60 years. And it happened on Friday.

In other business news, Tesla’s sales may have dropped sharply in recent months, after a federal tax credit was reduced, according to vehicle registration data. Above, a Tesla showroom.

And one industry is making an unexpected comeback: Paper mills are seeing a resurgence as online retailers like Amazon fuel demand for cardboard boxes.

6. A gatekeeper for recruited athletes applying to the University of Southern California was once known as a stickler for the rules.

Now, Donna Heinel, the university’s former athletic department administrator, is accused of being at the fulcrum of the nationwide scandal, conspiring with a private admissions consultant to obtain millions in bribes and then easing two dozen students into U.S.C. on bogus athletic credentials.

Ms. Heinel was “as hard as it gets,” a former coach said. She meticulously combed through recruits’ files, clashing with coaches when she found flaws. Above, Ms. Heinel posing with students during a football game in 2016.

One of the recruits she appeared to block from admission went to a rival university — and competed in the 2016 Olympics.

Elsewhere in California, we traveled to a West Hollywood school where proctors are accused of giving test answers to students. Sign up for California Today for more West Coast news.

7. The world’s largest international police organization is supposed to be a force for safety and security — one that transcends national boundaries and brings together democracies and autocracies.

Instead, according to records and interviews across five continents, Interpol prioritized international expansion over safeguards, meaning despots and human rights violators could potentially use the agency to arrest people based on political motivations. Above, Interpol’s headquarters in Lyon, France.

A crucial part of the system is the red notice, a kind of warrant in which police officers in one country ask foreign counterparts to make an arrest. When the system works, it helps catch murderers, rapists and sexual predators who cross national borders. But it has also been used to target refugees and dissidents.

8. It’s hard enough being a teenager, balancing rigorous schoolwork with social pressures that are heightened by online platforms.

Imagine being one of the few black and Hispanic students at one of the country’s most selective public schools. That’s what the 29 black students — out of 3,300 — at Stuyvesant High School in New York, pictured above, experience.

Sarai Pridgen, a 16-year-old sophomore, said she wasn’t surprised when she saw that only seven black students were admitted for the fall. “It was the same wave of disappointment I feel every time I look at the demographics of this school.”

No. 1-seeded Virginia rallied out of a deep hole to advance. It was a chance to atone for its unprecedented early exit from the 2018 N.C.A.A. tournament, when it became the first No. 1 seed to lose to a No. 16.

U.C. Irvine, a 13th seed, upset No. 4 Kansas State. It was the first N.C.A.A. tournament victory in the Irvine program’s history. Above, the game between U.C. Irvine and Kansas State.

Saturday’s first game will be Maryland vs. L.S.U. at 12:10 p.m., and then Wofford versus Kentucky.

At least, that’s what Rick Steves, the PBS travel host for nearly two decades, wants you to believe. For The Times Magazine’s Voyages issue, Mr. Steves, pictured above, spoke to our writer about his desire to convert the untraveled, and his role as a sort of spiritual travel agent for America’s middle classes.

Our writer asked why he doesn’t ease up on his extensive travel schedule — which occupies him for four months a year. “What would I do if I stayed home?” Mr. Steves said. “Not much. Nothing I would remember.”

Have a memorable night.

Calgary dancers celebrate the roots of popular dance genres: ‘It all comes from Africa!’

Opinion | Only Washington Can Solve the Nation’s Housing Crisis