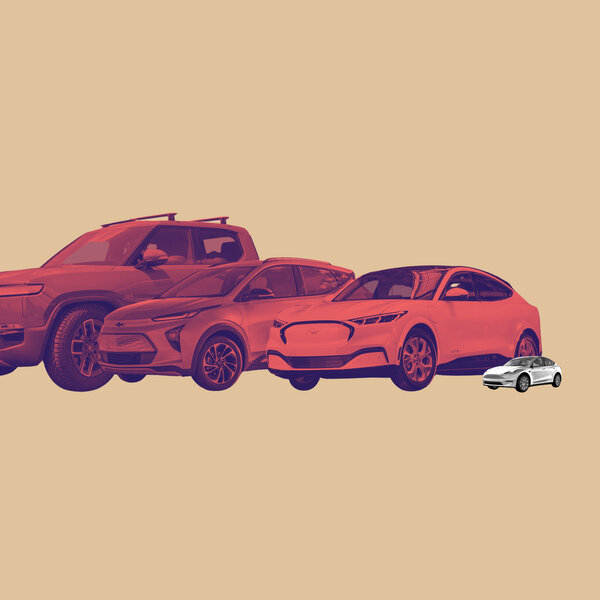 Not long ago, Tesla’s electric vehicles were far and away the best on the market. If you wanted a stylish, long-range, easy-to-charge and feature-packed E.V., Elon Musk would be your most likely supplier — even if you hated his guts.

But not anymore. In the past year I test drove many fantastic new E.V.s that hit the market in 2021 and 2022 — cheap ones, expensive ones, big ones, small ones, strange ones, boring ones. Ford’s F-150 Lightning, the electric version of the longtime best-selling vehicle in America, and its Mustang were terrific inside and out — nicely designed, roomy and fun to drive. The Kia EV-6’s striking, futuristic exterior had strangers stopping me to ask what cool ride I was driving. There are also great models by Chevy, Mercedes and Rivian. Although I liked the Teslas I drove — the uber-expensive Model S Plaid, which can launch from 0 to 60 mph in about two seconds, was terrific fun — the truth is that many of the best electric wheels on the market today are not made by Musk.

The new competition makes Musk’s recent role as the town crier for the redpilled online right especially puzzling and, for his car company, perilous. Musk’s chaotic and polarizing tenure as Twitter’s chief executive — during which he’s embraced far-right tropes about gender and journalism and public health, and generally behaved like a rich bully on a power trip — already seems to be battering Tesla’s brand. The Wall Street Journal reported last month on a survey by Morning Consult showing that perceptions of Tesla have been falling steadily since May, shortly after Musk began his bid for Twitter; between October and November, the period when Musk took ownership of Twitter, sentiment among Democrats toward Tesla plummeted, while favorability among Republicans rose slightly.

“He’s talking people out of buying cars that they want to buy,” Ross Gerber, the C.E.O. of Gerber Kawasaki Wealth and Investment Management, told me.

Gerber, whose firm holds shares of Twitter and Tesla, has been needling Musk on Twitter over Tesla’s terrible stock-market performance this year, which Gerber says is due almost entirely to Musk’s focus on Twitter and his overt embrace of partisan politics. Tesla’s sales and profits remain strong, its production capacity keeps ramping up, and it’s likely to benefit greatly from clean-vehicle tax credits passed in the Inflation Reduction Act that President Biden signed in August. But its success could get sidelined by Musk’s tweets.

“I don’t care if you’re selling pizza or popcorn or whatever you sell — getting into politics with customers never wins,” Gerber said.

It’s hard to disagree. A few weeks ago, I test drove Chevy’s new Bolt EUV, the squat electric crossover that is the slightly larger cousin of the Bolt EV, the entry-level electric car that General Motors began selling in 2016. I was bowled over by the new Bolt. I found it surprisingly roomy and much nicer on the inside than its staid exterior would suggest. I also liked that its interior felt a lot more like a normal car than Musk’s all-touchscreen automotive design style. In the Bolt you can control the air-conditioning and other systems with hefty buttons and knobs that are easy to find and manipulate while you’re driving; in a Tesla almost everything is controlled by touching a big screen mounted in the center console.

The best thing about Chevy’s Bolt EUV: The model I tried, which was kitted out with nearly every available option, including G.M.’s fantastic driver-assistance program, Super Cruise, carried a sales price of just under $38,000. Tesla’s cheapest car, the Model 3, sells for upward of $45,000. As I drove the Bolt, I asked myself a question that came up often this year: With such great alternatives that carry none of Musk’s political baggage, why does Elon keep acting as if customers have no choice — as if he’s the only game in town?

Tesla’s new vulnerability is a surprising development. At its towering peak, last fall, Musk’s car company hit a stock market valuation of more than a trillion dollars, greater than the combined value of the five largest automakers in the world. Tesla looked unstoppable. While rival manufacturers suffered punishing supply shortages that held back sales through much of 2021, Tesla’s once-mocked investments in building its own software and components allowed it to ride out supply-chain kinks, resulting in record sales.

Then, inexplicably, Musk turned to Twitter and pushed Tesla off a cliff. This year, as he sold tens of billions of dollars of Tesla shares to finance the Twitter deal and seemed to stake his reputation on taming the squabbles roiling one of the most divisive places online, Tesla’s shares plummeted by more than 60 percent. Its slump is deeper than that of most of its rivals and far more than that of the S & P 500, which is down about 19 percent for the year.

Not all of Tesla’s problems are of Musk’s making. Like other global manufacturers, the company has faced Covid-related production delays in China. It has struggled to ramp up production at its new facilities in Austin, Texas, and Berlin. The Federal Reserve’s steady increases in interest rates and the looming prospect of a recession have also dampened Tesla’s fortunes. On Twitter, Musk has repeatedly blamed the Fed for Tesla’s stock swoon.

But analysts and investors I talked to said these were side issues. “Tesla is Musk and Musk is Tesla,” said Dan Ives, an analyst at Wedbush Securities who follows Tesla. Unlike just about every other carmaker, Tesla spends almost nothing on advertising. Musk is and has long been the company’s sole marketer and chief evangelist, the main force driving the world’s desire to buy Teslas. And so any alteration in Musk’s cultural standing will affect the company’s standing, too. Musk’s time running Twitter has been “a massive brand destruction for Musk and for Tesla,” Ives said.

It’s not impossible for Tesla to shake off these problems. Musk has pledged to step down as Twitter’s chief executive as soon as he finds a replacement; Ives and Gerber told me that if this happens relatively quickly and Musk somehow becomes newly disciplined at keeping away from polarizing stances online, Tesla could quickly recapture its former glory.

Tesla still enjoys some advantages over rivals, especially its network of over 40,000 chargers around the world, making Teslas easier to juice up than other E.V.s. But the federal government plans to spend billions installing chargers across the country, most likely eroding Tesla’s lead. (Tesla has opened up its chargers in Europe to cars made by other automakers; it has said it plans to do so in North America, too.)

Colin Rusch, an analyst at the investment firm Oppenheimer & Co., pointed out that Tesla also enjoys a multiyear lead in certain E.V. technologies. It has invested deeply in advanced battery design and more efficient manufacturing processes, areas in which its rivals are only just getting started. Still, Rusch recently downgraded his expectations for Tesla’s stock price, citing increasingly negative sentiment toward Musk.

A lot of people think of their cars “as a way to signify a kind of identity,” Rusch told me, “and the Tesla brand and what it signifies has come to mean a few more things than it did before.”

Farhad wants to chat with readers on the phone. If you’re interested in talking to a New York Times columnist about anything that’s on your mind, please fill out this form. Farhad will select a few readers to call.

Shane Phelan: 'Rise of debt write-offs: Hundreds seek deals as they battle to save their homes'