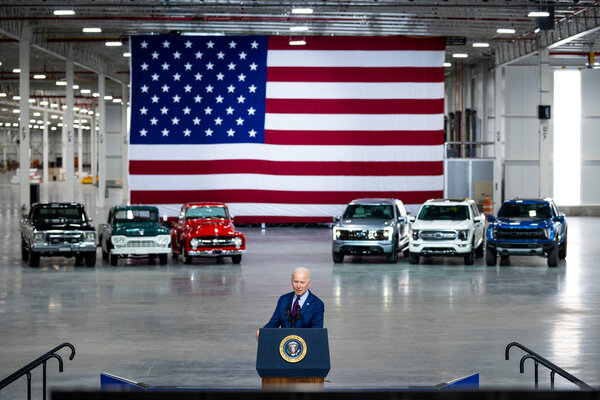 By Margo Oge and Drew Kodjak

At a gathering on the White House lawn last August, President Biden spoke of a future in which electric cars and trucks will be the only vehicles on the road. “The question,” he said, “is whether we’ll lead or fall behind” in the global race to achieve that vision.

Mr. Biden has been vigorous in pushing for the end of the internal combustion engine for cars and light trucks. In August he signed an executive order that called on the federal government to do all it can to ensure that half of those vehicles sold in the United States are electric by 2030.

But when it comes to electrifying heavy trucks and buses, among the most polluting vehicles on the road, the country is in danger of falling behind the efforts of other nations. After the global climate summit in Glasgow last fall, 15 nations, including Canada and Britain, agreed to work together so that by 2040, all trucks and buses sold in those countries will be emission-free.

Missing from that group was the United States (and China and Germany, for that matter). Developing standards in the United States to make those vehicles electric is essential if the nation is to meet its global climate commitments. Heavy-duty trucks are responsible for nearly a quarter of the greenhouse gas emissions from the nation’s transportation sector, itself the biggest contributor of those emissions in the economy. Clearly this segment of the transportation sector cannot be ignored.

But Mr. Biden has not yet set a deadline for when new models of those vehicles must be emission-free. The United States must be more aggressive. One opportunity for action could come this month, when the Environmental Protection Agency is expected to propose more stringent air pollution standards for heavy-duty vehicles.

The president did issue an executive order in December that set in motion a plan for all new cars and trucks purchased by the federal government to be emission-free by 2035. But for the United States to maintain its economic edge, address environmental injustices, improve public health and accelerate job growth, joining those nations pushing for all newly sold trucks and buses to be emission-free by 2040 is essential.

Beyond their impact on the climate, emissions from those vehicles have pernicious effects on human health. Tractor-trailers, delivery vans and heavier-duty pickup trucks make up only 10 percent of vehicles on the road, but they spew 45 percent of nitrogen oxide emissions and 57 percent of fine particulates, known as PM 2.5. Both are linked to premature death and chronic illnesses, including heart disease, lung cancer, stroke and childhood asthma.

Opinion | Joe Biden: Be Proud of Your Crime Bill