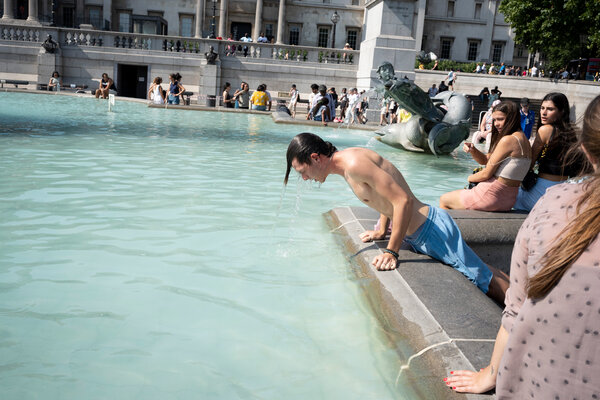 Ms. Lothian-McLean is a journalist who writes about Britain’s politics and culture.

A dependably temperate climate has this week given way to extreme heat. “HOTTER THAN THE SAHARA,” bellowed the front page of the aptly titled tabloid The Sun on Monday. Worryingly, it proved to be a rare instance of accuracy from the paper. By midafternoon that day, British meteorologists confirmed that England, Scotland and Northern Ireland had all experienced the highest temperatures of the year so far. Wales went one scarier, breaking its record for the hottest day not once but twice.

For all the problems they pose, temperatures up to 40 degrees Celsius, or 104 degrees Fahrenheit, tend not to be too disruptive for continental Europeans. But Britain could not cope. Parts of Southern England — where the heat was fiercest — buckled, literally at times, with reports of “melting” runways halting air traffic. Schools across the country closed, railways reduced service and hospitals canceled routine appointments and surgeries, bracing for heat-wave-induced pressure on emergency departments.

The British media, never happier than when the weather goes awry, responded with barely concealed relish. Live briefings charted the chaos wrought by the rising mercury while celebrity doctors offered insightful advice such as “drink water” on daytime TV. Chirruping lifestyle features informed an overheating populace that gazpacho — the Spanish cold soup — could provide short-term relief or, better yet, a quick rubdown with onion juice would ease any discomfort. Social media was awash with tips for the sun stricken, from lying down to taking regular cold showers.

However well meaning, the advice reveals how fundamentally unprepared the country is to deal with the heat. This sort of weather (tempered by air-conditioning, of course) was once something only the wealthy, with their luxury holidays abroad, could afford to reach. Now, thanks to climate change increasing the frequency and severity of heat waves, it is the common inheritance of all — a far from pleasurable experience of sweltering in heat-trapped homes whose burden falls disproportionately on the shoulders of the poor and the elderly.

Britain is melting, and we’ve got nothing more than water-soaked towels and improvised foot baths to get us through it.

There’s certainly no aid coming from the Conservative government. Dominic Raab, the deputy prime minister and one of the few cabinet members not to resign during the successful revolt against Boris Johnson, instructed the public to cultivate “resilience” when it came to the stultifying heat. Individuals need to adapt, he said, not the state. And besides, Mr. Raab blithely told broadcasters, “We ought to enjoy the sunshine.”

One suspects that such resilience would be easier to summon if successive Conservative governments had not neglected official warnings to fortify Britain’s infrastructure against the growing threat of extreme heat. In 2021 a government advisory body, the Climate Change Committee, found that the government was comprehensively failing to protect people from extreme weather conditions. “The United Kingdom has the capacity and the resources to respond effectively,” the report stated. “Yet it has not done so.”

There’s no sign of that changing any time soon. In fact, even the government’s vestigial commitments to combat climate change could soon be rolled back. As Britain braced itself to broil on Sunday night, Conservative leadership hopefuls gathered for a televised debate. Amid awkward jousting and truly terrible turns of phrase, a common thread emerged: No candidate was prepared to commit without qualification to reaching net-zero carbon emissions by 2050, a 2019 Conservative manifesto pledge already criticized as too little, too late by scientists.

Although Liz Truss and Penny Mordaunt said they would back the goal, most candidates fretted about the financial cost of an energy transition. Kemi Badenoch, the self-proclaimed “anti-woke” former equalities minister whose leadership bid has been endorsed by the fascist group Britain First, went the furthest. “If we bankrupt ourselves,” she said, “we will be leaving a terrible future for our children.” Better a smaller state deficit than a livable planet.

It’s an argument that withers under the merciless glare of the sun. It’s not just that thermometers across the country show that the hideous heat of the future is already here. It’s also that, according to one estimate, climate adaptation is up to 10 times as cost-efficient as inaction. Doing nothing makes neither human nor economic sense.

The partial exception to the equivocating chorus was Rishi Sunak, long seen as a possible successor to Mr. Johnson. But though generally more amenable to green policies, Mr. Sunak was reportedly resistant to allocate funding to climate projects while he was finance minister — and seems willing to shy away from climate measures in the name of fiscal probity. These noncommittal positions won’t damage his standing in the contest for Conservative leader, though. Polling reveals that climate action is the lowest priority for the roughly 180,000 Conservative members who get to decide the next leader of the country.

In such an environment, climate fatalism is understandable. But immediate solutions to extreme weather conditions already exist: planting more trees, building designated cool spaces and insulating houses to keep heat out rather than in. These are not new discoveries. “The answer,” as Prof. Mike Tipton has said, citing ancient Rome’s penchant for fountains and public gardens, “has been there for at least 2,000 years.”

Britons have a choice beyond which household fan to buy, whether we realize it or not. Either we sit and boil like lobsters in a pot or force ourselves to face the future that seemed so comfortingly far away until, suddenly, it wasn’t.

Moya Lothian-McLean (@mlothianmclean) is a contributing editor at Novara Media and a freelance journalist.

Opinion | Biden Should Go Big, and Then Brag About It