Hamas has left Gaza in shambles. Life there is difficult, sad and abnormal. Only buildings with generators actually maintain steady power. The lack of power affects everything from preserving fresh food to treating sewage. If a person in Gaza falls ill, he is likely to find trained medical professionals unable to help because of the lack of equipment and medicines. The people there — even the talented and educated — can’t find jobs. The store shelves are empty. The shoreline, which in many other places in the Mediterranean would be filled with beach resorts, is covered in the raw sewage and debris from successive wars. The cost of conflict is seen in all aspects of life in Gaza.

If you ask why such hardships exist in Gaza, the answer will almost always be the same: the Israelis.

Really? The Arabs in Israel generally live normal lives and, in many cases, thrive. In fact, Arab citizens of Israel live freely compared with Arabs in many other countries in the region. The Palestinians in the West Bank are largely progressing in stable cities and communities. Educated workers are finding jobs (though there is much room for improvement — something the Trump administration has tried to help Palestinians with, only to be blocked by the Palestinian Authority). Trade both with Israel and abroad is providing employment and possibilities. Infrastructure has progressively improved. Power is available 24 hours every day in most communities.

Why are others moving forward while Gaza sinks further into despair and disrepair? Because Hamas, the de facto ruler of the Gaza Strip, has made choices. Hamas professes violence and the destruction of Israel as a method of gaining a better life for Palestinians. This “defense” of Palestinians has led to the problems experienced today: a decimated economy, hundreds killed in violence each year and one of the highest unemployment rates in the world. Hamas is to blame for Gaza’s situation.

The countries of the world have attempted to help the people of Gaza repeatedly since 2007, when Hamas violently seized power there from the government led by Palestinian Authority President Mahmoud Abbas. Donors have offered to build the infrastructure and the economy, but are set back years every time Hamas and other terrorist organizations fire rockets into Israel. Hamas has instigated three wars with Israel since 2007, each time leaving its infrastructure in greater disarray.

In these wars, Hamas and other terrorist groups launched thousands of rockets. Each new attack on Israeli communities forces Israel to adopt more restrictive measures on imports to Gaza to prevent the illicit transfer of goods that could be used to build and expand the militants’ arsenals. The international community donated funds for reconstruction of homes, but Hamas diverted these supplies to build the infrastructure for war instead of schools and hospitals.

Examples abound. Cement for building homes, schools and hospitals was diverted to build and reinforce tunnels under the boundary between Gaza and Israel that terrorist groups use to carry out attacks. When concrete was limited, wooden pallets were used instead. Pipes were used to manufacture rockets instead of improving the water distribution systems. Chemicals for bottling and canning were diverted to create rocket fuel. Electrodes for rockets were reportedly smuggled in butter containers and concealed in shipments of marble slabs.

Each time Hamas’s nefarious uses are discovered, Israel must make adjustments to prevent terrorists from using items as tools of war. Each new security measure slows, or in some cases prevents, legitimate business.

Recently, Gazans have been protesting against their Hamas rulers. The people living in these unbearable conditions are beginning to hold Hamas responsible for not providing services or opportunities. Hamas’s brand of hatred and violence has led the population to extreme hardship. When the demonstrators voiced their disapproval of how Hamas was governing, the first response of Hamas was to direct violence — vicious beatings and torture — against its own people. 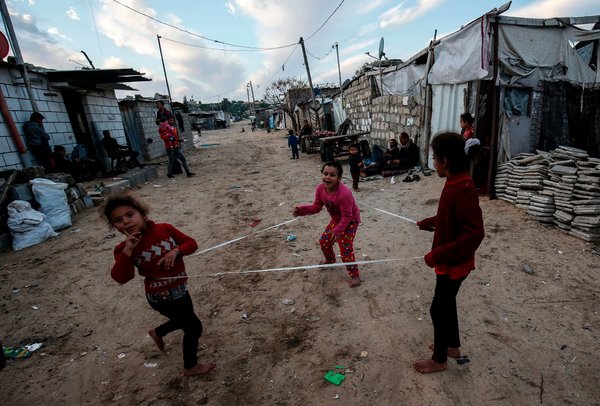 Hamas has driven the people of Gaza into lives of misery in a bid to stay in power. A recognition of its dismal failure and an honest assessment of reality could pave the way to reconnect Gaza to the world that wants to help. The situation was not caused by the United States; it was caused by Hamas. The United States does not want this situation to continue — but we cannot fix it.

The world is waiting to help again but has been prevented from doing so by the choices made by Hamas, Palestinian Islamic Jihad and other terror groups operating in Gaza. We need to be realistic. Whether or not we achieve a comprehensive peace agreement between Israel and the Palestinians, the future of Gaza cannot be addressed and the people of Gaza cannot be helped in any meaningful way until Hamas is no longer in the picture or makes the necessary choices for stability and, eventually, peace. To achieve peace — or even some normalcy — in Gaza, Hamas and others must make hard choices, including renouncing violence and recognizing Israel. Imagine if Hamas put the people of Gaza first. Imagine if Hamas chose peace.

Jason D. Greenblatt (@JDGreenblatt45) is an assistant to President Trump and the special representative for international negotiations.

Gerard O'Regan: 'Ross might fire blanks on sport – but his road safety drive is hitting target'

COMMENTARY: The Arctic hasn’t been this warm for 3 million years, and that can change the planet