My wife, Debbie, came out as a lesbian when she was 50 years old. Her first Pride parade in New York City was also the first time, she told me early in our courtship, that she was able to understand what it feels like to be proud. There is a picture of her on Christopher Street, beaming. She is wearing a T-shirt that says, “Yep, I’m Gay.” Around her are hundreds of people from the L.G.B.T.Q. community, and allies, celebrating our right to be.

I came out as a lesbian when I was 19 and would, in later years, identify as bisexual. It was a relatively unremarkable experience. But after a misadventure in Arizona, I found myself in Lincoln, Neb., my home state. I didn’t know many people, and I certainly didn’t know other queer people. I had no role models. I didn’t know how to ask a girl out on a date or where to get the right haircut. My first Pride parade, in Omaha, was a modest one — but there were rainbow flags everywhere and beautiful queer people of every stripe. There was music and dancing. There were pamphlets about marriage equality and activists giving fiery speeches. I knew, deep in my bones, that I was among my people.

Our experiences mirror those of millions of other queer people who have needed, at some point in their lives, to find their people. Pride parades are and have been a way for the L.G.B.T.Q. community to march proudly through the streets of our cities, to claim our identity in a world that criminalized our sexuality, demanded our shame, expected us to hide in the dark.

Modern Pride celebrations began with a rebellion against the police. In June 1969, at the Stonewall Inn, a gay bar in Greenwich Village, there was yet another police raid — but this time it was met with a raucous protest. The bar patrons fought back and continued to protest for the next several days. A movement, largely ignited by Black trans women and young gay hustlers, was born. The first gay pride parade was held the following year in New York City. 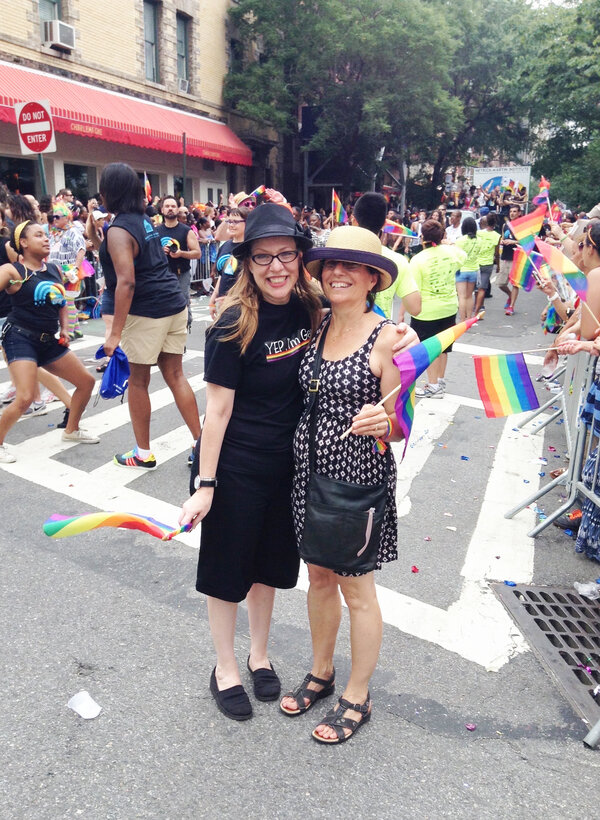 Now, after Pride organizers asked police officers to refrain from marching in uniform as a group in the New York parade (as Pride organizations have done in other cities), there has been an outcry and complaints that L.G.B.T.Q. officers are now the ones being marginalized. But many of us want no part of a display of police pride. Our history is young, and we have not forgotten it. For decades, the police have tormented our communities. They enforced laws about how we dressed, where we congregated and whom we had sex with. They beat us, blackmailed us and put us in jail.

Police harassment didn’t begin or end in 1969 — nor did queer resistance. Ten years before the Stonewall uprising, there was a similar incident in Los Angeles. The police began harassing patrons at Cooper Donuts, a cafe that welcomed not only gays and lesbians but also transgender patrons. When the police tried to arrest several people, they were pelted with debris until they fled the area.

And even now, the police across the United States can be incredibly hostile to the L.G.B.T.Q. community, whether it is mishandling intimate partner violence in our relationships, physically and verbally assaulting us, refusing to investigate the crimes we suffer or abusing their power when they police our events.

Violence against Black trans women remains disproportionately high, with many reporting that they don’t feel safe going to the police for fear of encountering more violence or facing disbelief and indifference. According to the Human Rights Campaign, at least 27 trans or gender-nonconforming people, most of them Black or Latinx, have been murdered so far in 2021, and many of their killings have gone unsolved. And then, of course, a year after the murder of George Floyd, it’s hard to ignore the ever-growing list of Black and brown people killed by police officers.

Over the past 50 years, Pride has evolved. At times, it feels unrecognizable because it has gone so mainstream. It has taken on the feel of a holiday, but with corporate sponsorship. What began in New York City is now celebrated in cities all across the world. Pride is a month of marches, parties and events. The celebrations are dynamic and broadly inclusive. Straight allies bring their children. Queer people bring our children. I love seeing how Pride has grown, but it sometimes feels as if we have forgotten who Pride is for. And it is frustrating that some corporations have commodified it, drenching their marketing materials with rainbow colors but doing little to celebrate and support the L.G.B.T.Q. community during the rest of the year. Nonetheless, at its best, Pride celebrations continue to offer space for us to know we belong to a community in which we are embraced for who we are.

We are a sprawling, unruly community. As we continue to think about who belongs at Pride, questions and, inevitably, controversies arise. Some people, for example, want to exclude the kink community or at least expect kinky queers to tone down their public expressions of sexuality to make Pride more family-friendly. This kind of respectability politics is nothing new. There have always been calls for the L.G.B.T.Q. community to neuter the sex from our sexuality, to temper our flamboyance, to bend to heterosexual norms. Let’s be clear: We should not have to contort ourselves to make straight people more comfortable with our lives. Assimilation cannot be the price we must pay for freedom.

The idea that we should now forgive the past and make peace with oppressive police forces is ludicrous. It is infuriating. In an essay for The Washington Post, the columnist Jonathan Capehart wrote a vigorous entreaty for L.G.B.T.Q. officers to be welcomed at Pride celebrations. The New York Times editorial board took a similar stance. Mr. Capehart empathizes with people who don’t want police officers at Pride, but he argues that they are wrong, calling it “beyond troubling that a community made up of so many who’ve been rejected by their families because of who they are is now turning on its members because of what they do for a living.”

This false equivalence defies credulity. We are not turning on anyone. Law enforcement is not an innate identity. The police are not marginalized. They aren’t disowned by their families for carrying a gun and badge. They haven’t been brutalized or arrested because of how they make a living.

And they aren’t actually being rejected; they are being asked to respect boundaries. L.G.B.T.Q. officers are more than welcome to join Pride celebrations — unarmed and in civilian clothing. They are being asked to confront their complicity with an institution that does more harm than good to vulnerable communities. It is telling that some of these officers refuse to do so. We don’t need the police marching alongside us. We don’t need them at Pride providing security.

What we need, what we’ve always wanted and deserved, is what Debbie and I found when we first marched at Pride: a welcoming space where we can be safe and free.

Roxane Gay (@RGay) is a contributing Opinion writer. She was the editor, most recently, of “The Selected Works of Audre Lorde.” She is the author of the memoir “Hunger.”

Kevin Doyle: 'Unity will come at a cost so let's take our time and make sure we get it right'