Home » Analysis & Comment » Opinion | Devoted to Trump, Not to the Republican Party 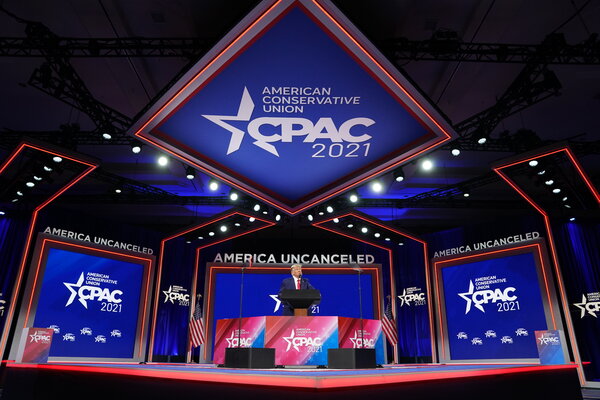 Joseph Conrad wrote, “The leaders of men are carried forward in the hands of their followers.” Never was this more true than with Donald Trump.

It should come as no surprise that he doesn’t intend to start a third party. Why should he when, by owning the allegiance of his millions of Republican followers, he owns a perfectly good party of his own?

Mr. Trump’s obsession with Republicans in Name Only is interesting, because it is not his enemies within the party who are RINOs, but rather his followers. Their only loyalty is to Mr. Trump himself, and their only concern is carrying him forward. They couldn’t care less about the Republican Party.

There is something deeply disturbing and un-American in this devotion to an individual rather than a party, a tradition or set of beliefs.

The end of the transgender military ban and the House passage of the Equality Act brought new understanding that transgender people like me are part of our communities all across the country.

The vast majority, more than 80 percent, of Americans believe in equal rights for L.G.B.T.Q. people. People across the political spectrum, including conservatives, supported me as I fought the transgender military ban. They knew that I wanted the same thing as everyone else: to work hard, contribute and be treated with dignity and respect.

I and other transgender people want to be treated fairly at work, in school, at doctors’ offices and at stores. The legal protections we’re fighting for will help ensure that everyone can reach full potential and give back to the community.

The Equality Act isn’t just about L.G.B.T.Q. people; it’s about what’s best for all of us.

Nicolas Talbott
Lisbon, Ohio
The writer is a transgender advocate.

I felt a chill reading your report about a plan to create an emergency stockpile of laboratory monkeys for Covid research “similar to those maintained by the government for oil and grain.”

In my anthropology fieldwork, I observed monkeys in Kenya that live in groups of related females called matrilines. Moms, aunts, siblings and cousins play together; the monkeys solve daily challenges thoughtfully and express emotions like grief. They are not commodities like oil and grain.

My concern goes beyond animal suffering; a “stockpile” of monkeys for research purposes will not appreciably help human health. From 92 to 96 percent of animal testing fails to translate to helping humans. Animal bodies don’t experience human diseases — whether Covid, cancer or Alzheimer’s — as human bodies do.

In my work, I write about a host of new, safe methods using human tissues and model organs, some available now and others in development.

Barbara J. King
Wicomico, Va.
The writer is emerita professor of anthropology at William & Mary and the author of “Animals’ Best Friends: Putting Compassion to Work for Animals in Captivity and in the Wild.”

Gene B. Sperling highlights a range of problems with criminal fines and fees, including that they disproportionately affect Black and brown Americans.

There are gender and family dimensions, too. Formerly incarcerated men straddled with debt find financial support in family, mostly mothers, grandmothers and sisters. Pulling the lens back, we see a system broadly characterized by incarcerated men of color needing to rely on women of color to get back on their feet.

All of this criminal debt feeds an entrenched system that reproduces itself. Not only are there punishments for nonpayment, there’s also research showing that both juveniles and adults facing criminal debt are likely to reoffend, kindling the cycle of crime, punishment, and more fines and fees.

Fortunately, although much more could be done, these problems are getting attention and reforms are happening. New Jersey recently abolished fines for juveniles, and some counties in California eliminated all court fees. We need to keep up the momentum in the search for evidence-based ways to scale back and create a more equitable system.

Nathan Link
Collingswood, N.J.
The writer is an assistant professor of criminology at Rutgers University, Camden.

Opinion | I Joined the Army to Prevent Genocide, Not to Pave the Way for It