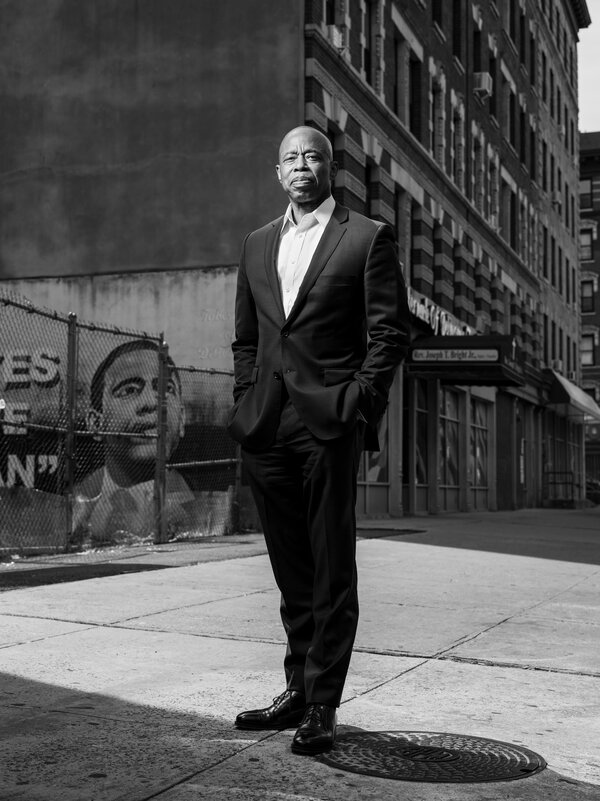 Eric Adams is the Brooklyn borough president. He was a police captain, and he founded the group 100 Blacks in Law Enforcement Who Care.

This interview with Mr. Adams was conducted by the editorial board of The New York Times on April 30.

Read the board’s endorsement for the Democratic mayoral primary here.

Kathleen Kingsbury: I’m Katie Kingsbury, editorial page editor at The Times. We have a lot of questions for you and not very much time. So brevity will be appreciated throughout this call. I wanted to start, though, by just asking why you want this job. Why are you the best candidate in the field?

Well, I think it goes back to several years ago. I recall sitting in the room with a group of commanders from the transit police. And a man named Jack Maple — many of you probably don’t know his name — he talked about “How do we turn around crime in this city?” It was a different city — 2,000 homicides a year, 98,000 robberies and an equivalent amount of felonious assault. And all the commanders around the table looked at each other and said the city’s always going to have 2,000 homicides a year.

Well, he put together a small team of us. I came into the Police Department — not only after being encouraged, after being arrested and assaulted — but I came in as a computer programmer. And he assembled a small group of us, and we instituted the first of its kind using data to fight the dysfunctionality of policing. And it was called O.L.T.P.S. It turned around crime in the subway. Bratton became the police commissioner. A newer version of CompStat. And in the first year, we went down 400 homicides in this city.

And I understood then, over 24 years ago, that the Police Department was really representative of this entire city. Listen, our city is dysfunctional. We create our crises. One agency creates a crisis, another agency responds to that crisis. And I know the only way we’re going to turn this city around and deal with these systemic inequalities that I believe leads to injustices is to go after that dysfunctionality.

[Mr. Adams co-founded an organization in the 1990s called 100 Blacks in Law Enforcement Who Care, which was a force for police reform.]

Mara Gay: Thank you, Mr. Adams. As mayor, you would be running a city with more than 300,000 employees, a budget larger than that of many small nations. If we ask people who have worked for you how you operate as a manager, what do you think they would say?

A combination. You know, I use Mayor Bloomberg’s concept of qualified, competent people and don’t F it up. But at the same time, my mother taught me as a child you better inspect what you expect or it’s all suspect.

So I have a real-time mechanism here in Borough Hall. We built out a Google Docs system that I have trained other officers how to use. I can tell you the meeting I had on January 2017 at 9 a.m. because all of this is well documented. I have a system where if I meet someone on the street with a problem, I give them a simple link. They fill it out. We’re a real-time office. And that is where we need to go as a city. They’ll tell you, Eric allows the person or individual to be appointed to do the job, but he’s going to inspect periodically to make sure you are trending in the right direction.

Mara Gay: Can you just briefly talk about your strengths and weaknesses as a manager?

Combination. I’m a hands-on person. I like to believe that I’m the commander in chief. I love being on the ground. We witnessed that during Covid-19. People thought it was a publicity stunt, but it wasn’t. I was in my office so I can get up at 6 a.m. in the morning to deal with some of the crises in the city. So I think that my hands-on style allows me to remain in the weeds but also to be effective.

[In March 2020, Mr. Adams moved a bed into Borough Hall, which became his living quarters so that he could work more hours. NY1 reported that he started each day with “meditation, exercise and an energy drink.”]

I think that I’m a great listener. I love hearing from people who have traveled the roads already. I met with, over the last two and a half years, I’ve met with 217 former deputy mayors, commissioners, heads of agencies, county commissioners. That’s what my document 100+ Steps Forward is about. It came from them on how we could effectively lead this city.

[Mr. Adams’s 100+ Steps Forward for NYC plan is nearly 40 pages long and includes 106 policy proposals. They include giving New Yorkers a real-time score card for government performance, appointing an efficiency czar, integrating housing assistance into hospital stays, publishing a list of officers whom the New York Police Department is monitoring for bad behavior, allowing building inspections to be done by drones and opening up school buildings for community use when classes are not in session.]

So when I look at my negatives — I’m a workaholic. You know, sunup to sundown, seven days a week. I don’t think I took a day off in the last eight years, unless I’m out of the country. I enjoy what I’m doing.

Mara Gay: Thank you again. Binya, do you want to ask about housing?

Binyamin Appelbaum: How many units of housing do you think New York City needs to create in order to deal with its affordable-housing crisis? How many more units of housing? And what would you do differently than your predecessors who have been largely unsuccessful in increasing the city’s housing supply?

You know, I’m asked this question often, and I believe it’s the wrong question. We need to look at the type of housing we need, and then we need to think differently about how we are building that housing.

Gerard O'Regan: 'Marian and Gay's excellence was driven by the need to stay ahead of the posse'

Opinion | When Did College Turn So Cruel?