Days after a Minneapolis police officer, Derek Chauvin, suffocated George Floyd and the video went viral, I watched my social media feed fill with blackout tiles and corporate publicity statements. They poured in from every industry, proclaiming solidarity with the Black Lives Matter movement. Hollywood — where I have worked for almost two decades — was no exception.

Far from offering relief, each new assertion by a talent agency, film studio, television network or streaming service that “silence is complicity” and that “we must do better” felt like a pinch of salt in a gaping wound. I found myself unable to ignore the gap between these meticulously workshopped platitudes and the daily words and actions I’ve witnessed in Hollywood, which reflect values I knew cost not only dollars but lives: How many movies like “Black Panther” have we not made? And more broadly, how many lives have we lost in part because of the dehumanization of Black people that Hollywood has perpetuated for more than a century?

Two weeks later, McKinsey and Company — where I worked as a business analyst from 2001 to 2003 before decamping to California to become an assistant at Creative Artists Agency — entered the fray, with a pro bono commitment to “work globally to advance racial equity and economic empowerment among Black communities.” As a representative of the Blacklight Collective, an informal group of Black Hollywood executives, I suggested that the consulting giant conduct a study on the state of Black people in Hollywood.

Its report was released last month. Despite its anodyne title — “Black Representation in Film and TV” — it contained shocking revelations. Or at least shocking to anyone who hasn’t been paying attention.

The study concluded that America’s film industry is the country’s least diverse business sector and that its systemic anti-Black biases cost it at least $10 billion in annual revenue. Black content is undervalued, underdistributed and underfunded, the analysis found. It also found that Black talent has been systematically shut out of creator, producer, director and writer positions. That is despite the fact that films with two or more Black people working in those roles made 10 percent more at the box office per dollar invested than films with no or only one Black person in those capacities. 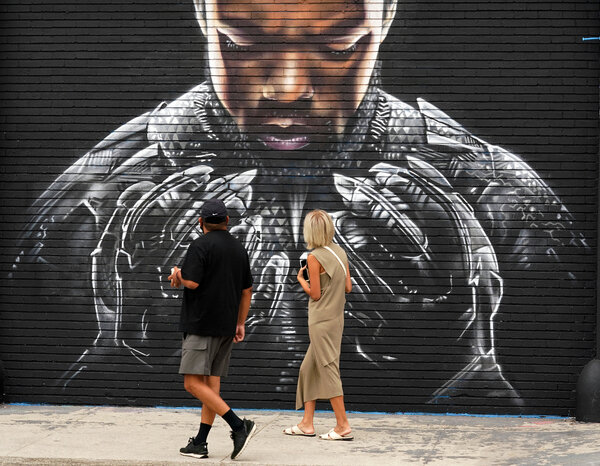 For anyone who may absorb that data and conclude that the lack of diversity in film and television, while unfortunate, isn’t an important societal concern, a history lesson is crucial: Even during the Civil War, the abolitionist and orator Frederick Douglass argued often for the vital importance of imagery and the narratives they create in fostering a pluralistic society.

Through sheer force of will, Douglass — born a slave in Talbot County, Md., in 1818 — made himself the most photographed American of the 19th century, partly driven by a belief that his now-iconic image, when paired with rhetoric, could debunk prevalent representations of Black people in his time as caricatures and nonhuman specimens. It was a campaign he shouldn’t have had to wage in the first place, but was also one that, as the Douglass biographer and Yale historian David Blight has explained, won over many ambivalent whites.

In 1916, a mere two decades after Douglass’s death, Hollywood produced its first blockbuster, “The Birth of a Nation,” which created the Ku Klux Klan’s hooded, cross-burning iconography. The propagandistic film, given a special screening at Woodrow Wilson’s White House, supercharged the organization’s bloody resurgence and solidified the view of Black men as criminal predators in white America’s imagination.

More than a century later, the need to confront racial stereotypes onscreen endures. According to McKinsey, “both on- and offscreen, Black talent is pigeonholed and funneled to race-related content, which often plays into stereotypes.” A 2016 Vox analysis found that 62 percent of onscreen gang members were Black.

Is it surprising, then, that the casual murders of Black people — both those captured on smartphones and the many more that preceded the smartphone era — are predicated on the perception of us as violent, criminal threats? (Similarly: Should we be shocked at the chillingly broad chorus of Americans chanting “Build the Wall” when so many Latino immigrant characters are shown engaged in criminal activity? And who can be genuinely surprised by the massacre in Atlanta, given the stories Hollywood has helped tell about women generally, and Asian women specifically?”)

It would be easy to mistake the Blacklight Collective’s solicitation of McKinsey’s work as grievance peddling. It’s not. It’s about business. Black people in Hollywood simply want to write, direct, produce, perform, photograph, negotiate, design and do hair and makeup for film and television, then profit from their labor in a manner that isn’t limited by the fact that they happen to be Black.

We all would love to be rid of the need to push for greater racial equity. We are also not naïve about the cold, hard truths. We do not expect that change in Hollywood will come out of the good in any leading executive’s heart. But we know that reversing the industry’s systemic racism is an extraordinary business opportunity — one that would benefit not just Black Hollywood, but all of Hollywood.

Without paying McKinsey a penny, the film industry can reclaim at least $10 billion in annual revenue, simply by addressing irrational, anti-Black market inefficiencies. The consultants also argue that there’s an even greater windfall to be had by addressing all the other market inefficiencies that stem from locking out other people according to race, gender, sexuality or disability.

Here’s a partial list of recommendations: Setting intersectional diversity targets onscreen, and especially offscreen, by expanding recruiting beyond traditional top-tier universities and film schools, increasing transparency around hiring and compensation and tying executive compensation to success in these endeavors.

There is also a proven and increasing demand for diverse content. Setting financial incentives throughout the talent pipeline to meet this demand would be good for everyone who wants to participate in the windfall generated by the next “Black Panther,” “Insecure” or “Creed,” or who wants to work with the “next” Ava DuVernay or Oprah Winfrey.

But according to the McKinsey report, another operational reform may be most crucial: Because of the industry’s uniquely interdependent value chain, the analysts recommend the creation of “a dedicated independent advocacy organization to advance racial equity in the field.” They continue, “A well-funded, third party organization of this nature could strengthen individual efforts by developing and scaling best practices, collecting and disseminating intersectional data, and reporting on progress across the industry.”

There is ample precedent within Hollywood for this sort of collective action when money is on the line: Look no further than the coordinated, well-resourced efforts the industry took to curb the annual $29.2 billion problem of piracy and intellectual property theft.

We’re now almost a year removed from #BlackoutTuesday. The black Instagram tiles and corporate solidarity statements so common during last summer’s racial reckoning have receded from most social media time lines and company websites, as things like that always do. The calls and emails people like me got from industry leaders hoping to learn more about being an ally in “a sustainable way” were revealed to be onetime, palliative attempts. Perhaps, the lip service we’ve all seen is to be expected.

For all its high-minded, artistic self-regard, all of its social and political influence, the film and television industry is, primarily, a business. As such, the industry does little without the promise of creating or maximizing profit. That means getting Hollywood to make more major commitments to improving society at large will continue to be an uphill battle.

But throughout my two decades in the industry, the claim has always been that substantively addressing diversity, equity and inclusion would cost too much and earn too little. Now, we have data that echo what many have been saying for generations. Inclusion isn’t expensive. Exclusion is.

How much longer will corporate boards and shareholders tolerate the suboptimal, almost laughable, financial outcomes driven by a whitewashed status quo?

Franklin Leonard, a film producer, is the founder of the Black List, an annual survey list of well-liked, unproduced screenplays. He was the recipient of the Writers Guild of America, East’s 2019 Evelyn F. Burkey Award, which recognizes a person or organization whose contributions have brought honor and dignity to writers.

Opinion | No Winner in a New Arms Race