Reading about the indictment of Donald Trump’s longtime pal Roger Stone, you can’t help thinking that we’ve got a president whose circle of associates closely resembles the guys Tony Soprano used to hang around with outside the pork shop in New Jersey.

Stone is a proud, self-proclaimed political dirty trickster. According to the Mueller indictment, he is also a witness tamperer who once threatened to kidnap the therapy dog of an associate who had been subpoenaed to testify before the House Intelligence Committee.

That’s not necessarily the most important part of the charges, but I knew you’d want to hear about it first. The witness is Randy Credico, a former radio personality who served as an intermediary between Stone and the WikiLeaks folk who released all those stolen Clinton campaign emails.

The indictment says Stone accused Credico of being “a rat. A stoolie” and warned that he would “rip you to shreds” and “take that dog away from you.” 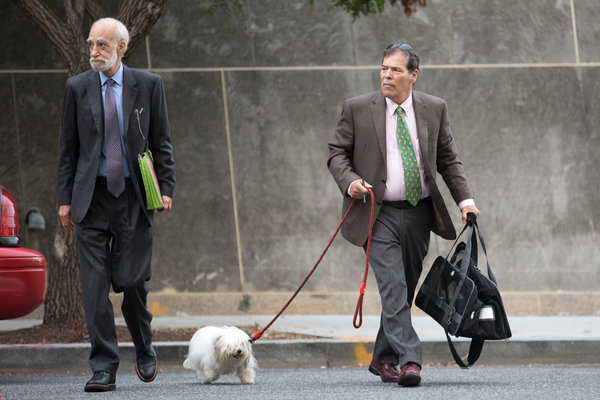 Credico has a little white emotional support dog named Bianca. Doesn’t this sound like something Paulie Walnuts would have done around “Sopranos” Season 4?

Moving on. The biggest news in the Mueller indictment was its charge that somebody told “a senior Trump campaign official” to contact Stone about any “damaging information” that WikiLeaks might have about the Clinton campaign. And that Stone reported back about stuff that just might be coming out in the near future.

Who do you think that Somebody could be? A person with receding hair and a taste for ultralong ties who recently kept the government shut for more than a month for no good reason whatsoever? Your guess is as good as mine.

How about lawyer Michael Cohen, now sentenced to three years in prison for lying to Congress? If Trump and the gang were a Sopranos remake, Cohen would be “Big Pussy” Bonpensiero, who turned on Tony after being busted himself.

Really, there’s so much talent there, it could have been anybody.

Stone and Trump go way back. They were introduced about 40 years ago by their good mutual friend Roy Cohn, the guy who gave us the McCarthy witch hunts. Trump still burbles about how great Cohn was. And he enthused to a documentary interviewer that Stone is “a quality guy” who “always wanted me to run for president.”

Can’t get a better recommendation than that. Stone has a talent for identifying presidential talent — he’s got a tattoo of Richard Nixon on his back. He was partners with Paul Manafort in a Washington lobbying firm that specialized in representing the most terrible dictators on the planet. If you had a million dollars, a need for support from the United States government and a small problem with torture, rape and terrorism, these were the guys to see.

(A third partner, Charlie Black, said that when reporters called him to ask if Stone was the connection between the Trump campaign and Russia, he replied, “With all due respect, Roger couldn’t find Russia on a map.” As always, when we’re considering possible crimes committed during the 2016 campaign, the best defense of Trump and his associates is that they were too dumb to be capable of plotting.)

“I’m proud of the job I did at Black Manafort and Stone because I made a lot of money,” Stone told those documentarians, getting right to the point.

Stone’s political career almost came to a crashing end in 1996 when he ran into a scandal that forced him to resign from the Bob Dole campaign. (The candidate was touchy about headlines like “Top Dole Aide Caught in Group Sex Ring.”) Stone blamed the story on a lying, disgruntled former employee. Later, he admitted that it was true, and explained that he needed to deny it because “my grandparents were still alive.”

But no matter, he would go on triumphantly to organize a wild protest that stopped the recount of votes after the Gore-Bush election in Florida. Or maybe not. Stone bragged that he was the guy who staged one of the most spectacular assaults on the democratic process in recent history, but there was competition for the title.

And then on to Donald Trump. He and Stone had worked on his political career for ages. (Although Stone doesn’t take credit for Trump’s Obama birther campaign, he’s said that he didn’t discourage the idea.) The two men parted company in 2015 — Stone claimed he’d quit because he was dismayed by Trump’s “provocative media fights.”

But then next thing you know we’re in 2016, and they’re pals again. Those Clinton campaign emails are stolen and released. According to Stone’s indictment: A “high-ranking Trump campaign official sent a text message to Stone that read ‘well done.’”

That would be a memorable moment. Not often when “well done” comes up in connection with the Trump crew. 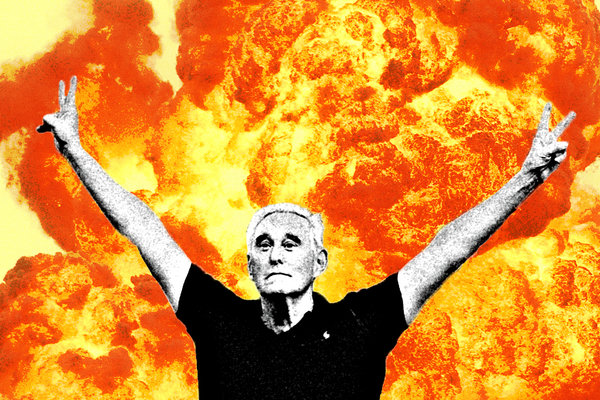 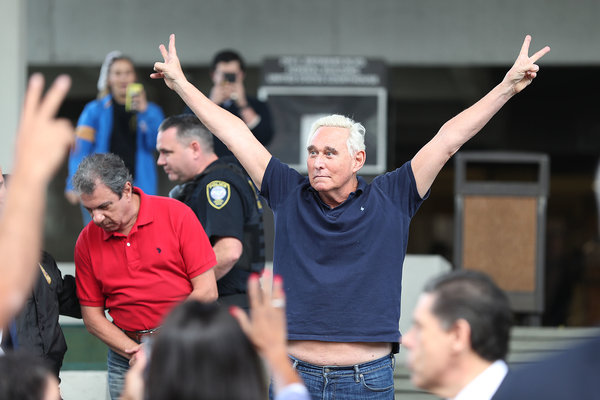 Gail Collins is an Op-Ed columnist, a former member of the editorial board and was the first woman to serve as Times editorial page editor, from 2001 to 2007. @GailCollins • Facebook