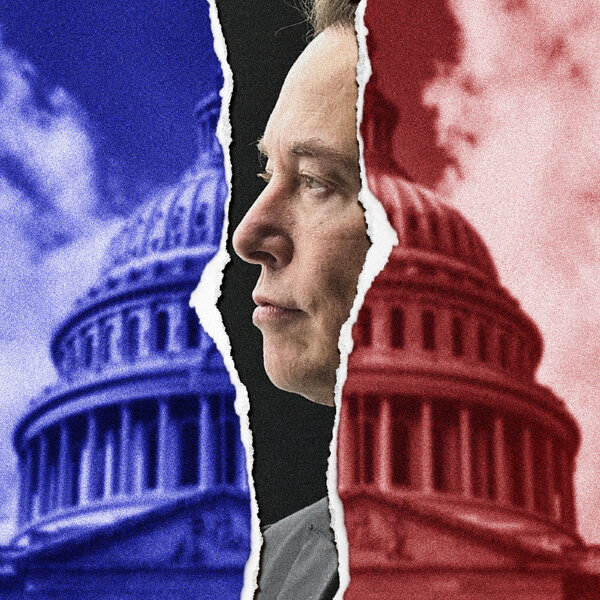 I have to admit: It has been fascinating to see Elon Musk tweeting his way ever deeper into a hole. It’s like watching a car crash — an electric, self-driving-car crash.

Nor is this just about Twitter. I’m not a marketing expert, but it seems obvious that Tesla’s brand rests in part on the perception that Musk himself is a cool guy. Tweeting out homophobic conspiracy theories about the attack on Paul Pelosi and suspending the accounts of comedians who mock him doesn’t seem good for that perception.

But I’m not here to give Musk business advice. What struck me instead was the justification he gave in urging Americans to vote Republican — an assertion that divided government is good because “shared power curbs the worst excesses of both parties.”

Leave aside the rather obvious question of whether extremists are equally prevalent on the two sides of the aisle. Is divided government actually good?

Now, Musk’s assertion didn’t come out of nowhere. The idea that divided government is good, at least for the economy, is widespread among businesspeople. I see it quite frequently in economic newsletters. What does history have to say?

First, we have to note that there’s divided government, and then there’s divided government. Democrats controlled the House of Representatives throughout the Reagan years, but some of them were conservative southern Democrats (some of whom later became Republicans). More broadly, political scientists have devised useful measures, based on roll-call votes, of polarization in Congress over time, and they show that neither house in the Reagan era was anything like it is today:

Still, the battle between the parties was already fairly bitter by the 1990s. Let’s not forget that Newt Gingrich shut down the government in 1995 in an attempt to force President Bill Clinton into cutting Medicare.

Yet the economy thrived during the six years of divided government that made up most of Clinton’s time in office. Unemployment fell further than most economists had thought possible, while inflation remained low:

Does this episode show that divided government is, in fact, good? Not really. There were underlying reasons for the good times that had nothing to do with politics, and the state of the economy at the time made strong government action unnecessary.

Most important, from the mid-1990s to the mid-2000s the U.S. economy experienced a surge in productivity as businesses finally figured out what to do with information technology. Here’s total factor productivity — a measure of the economy’s overall technological level — since the early 1970s:

I’ve expressed productivity as a natural logarithm, so that the slope of the line shows the rate of growth; if you don’t get that, never mind, just look at the picture. Clearly, there was rapid progress back then that has slowed a lot since. And I see no reason to believe that these good things had much if anything to do with politics.

Rapid productivity growth was good for both supply and demand: It held costs down, helping to keep inflation low, and it fed a boom in business investment. This boom, combined with favorable demography — baby boomers weren’t yet beginning to age out of the labor force — had an additional effect that economists, at least, consider important. Namely, the “neutral” interest rate — the rate consistent with full employment — was relatively high. As a result, the interest rates set by the Federal Reserve were consistently well above zero:

Why was this important? Because it gave the Fed — a quasi-independent agency fairly insulated from politics — room either to raise or cut rates to stabilize the economy. That is, we didn’t need active fiscal policy, which would have required some bipartisanship, to fight possible recessions. Alan Greenspan, who was then the Fed chair, and his colleagues could do that job themselves without needing much of anything from Congress or the president.

So while it’s hard to make the case that divided government was responsible for the good economy of the 1990s, at least it didn’t do much harm.

Matters were very different during the next extended period of divided government, under President Barack Obama, and not just because Republicans had become more extreme. The economy also needed more help — help that wasn’t forthcoming, because the G.O.P. wouldn’t allow it.

If you look back at the chart showing unemployment and inflation over time, you can see that recovery from the 2008 financial crisis took a very long time. Total employment didn’t regain its December 2007 level until April 2014, and unemployment didn’t get below 5 percent until late 2015. Given that the U.S. economy was clearly capable of sustaining an unemployment rate below 4 percent without excessive inflation, the sluggish recovery under Obama represented a huge waste of economic and human potential.

The Fed was aware of this problem, but it didn’t have the tools to fix it. Look back at the chart on interest rates, which were approximately zero over this whole period, leaving the Fed with no room to cut further. While Ben Bernanke and colleagues did engage in “quantitative easing” — purchases of longer-term bonds in an attempt to gain some traction — this was a poor substitute.

What the economy needed was fiscal stimulus — government spending to boost demand. This stimulus could and should have mostly taken the form of investment, both in infrastructure and in children, via education. Borrowing to pay for this investment would have made a lot of sense given extremely low interest rates.

But the Republicans who controlled the House after 2010 wouldn’t allow that. In fact, they used the threat of refusing to raise the debt limit — which would have created a financial crisis — to force Obama into fiscal austerity, with federal spending falling steadily as a share of gross domestic product. Divided government was extremely costly during the Obama years, even if the costs may not have been obvious to casual observers.

So where are we now? Republicans are more extreme than ever; today’s G.O.P. makes the Tea Party look like a well-mannered debate society. And there’s a very good chance that if Republicans take Congress, they’ll again threaten to create a financial crisis over the debt limit.

The good news is that the current state of the economy doesn’t demand immediate federal action. Unemployment is low; inflation is a big problem, but it’s a problem the Fed can tackle on its own by raising interest rates, which it has been doing.

The bad news is that there are many important things the federal government should be doing other than short-term macroeconomic management, from enacting sensible climate policy to supporting Ukraine’s fight against Russian aggression. And Republicans, if they gain control of one or both houses of Congress, are all too likely to undermine these efforts.

So, no, divided government isn’t a good thing. Extrapolating from the Clinton years, when partial government paralysis did relatively little harm, is a really bad idea.

Polarization and the Southern switch.

The Biden administration is taking a tough line on China.

Speaking of China, it has big problems.

Despite the title, this song is not actually about politics.

Opinion | The Wisdom Your Body Knows