LIMA, Peru — In November, Peru had three presidents in 10 days. One lasted six days. We don’t know if the current interim president, Francisco Sagasti, will survive until April, when elections are scheduled to be held. And if he does, who will follow him? Is my country ungovernable?

Peru was cursed with eight military coups in the 20th century. But over the last two decades, the country has become a relatively stable democracy, with reduced poverty and sustained economic growth. And yet, corruption remains deeply rooted. Four past presidents have been or are under investigation over allegations that they took payoffs from Odebrecht, a Brazilian mega-construction company that corrupted virtually every country in the region. A feverish anti-corruption campaign calmed public outrage but exacerbated our taste for political cannibalism.

All efforts to clean up this quagmire have ended in chaos. And underlying that chaos is a fundamental puzzle: How do you fight impunity when the entire political system is rotten, not least the very politicians who are supposed to bring about change? It is, of course, a tricky proposition in which what is at stake is the very stability of the nation.

In these circumstances, the Peruvian drama is a cautionary tale for Latin America, a region with pervasive venality, and it invites us to mistrust any effort presented to the population as a heroic crusade to cleanse the government of corruption by promising greater accountability and stronger penalties against corrupt officials.

In Peru, political warfare reached a boiling point in the last three months. Nothing was off the table in the fight to eliminate political rivals, including new forms of coups. There was no need to call in the military when the Constitution provided convenient loopholes. For instance, the opposition in Congress can expeditiously oust a president for “permanent moral incapacity,” a vague concept that could refer to the president’s mental or moral fitness.

First, Pedro Pablo Kuczynski, a retired Wall Street investment banker, was elected president in 2016 for a five-year term. After less than two years in office he was impeached and forced to resign. Keiko Fujimori, the daughter of former President Alberto Fujimori, had narrowly lost the election and refused to concede. She used her majority in Congress to banish Mr. Kuczynski, accusing him of corruption. Though Mr. Kuczynski, 82, has not been charged, he has been under house arrest for two and a half years.

In stepped Martin Vizcarra, Mr. Kuczynski’s vice president, who conspired to unseat his boss. At first, Mr. Vizcarra was Ms. Fujimori’s pawn. But, in the name of a crusade against corruption, he crushed her party. His approval ratings soared, and peaked in September 2019 when he dissolved Congress — a radical decision that destroyed the balance of power and eliminated a corrupt and nasty, yet democratically elected opposition. It allowed Mr. Vizcarra to rule by decree for more than six months.

This coup was justified by progressive liberals and anti-corruption activists as a necessary means to advance political reform. The highest court, the Constitutional Tribunal, endorsed the move in a 4-to-3 vote. Legislative elections were then held and a new Congress, as corrupt as the previous one, was installed in March.

In November, the local news media reported allegations that Mr. Vizcarra had accepted bribes from construction companies when he was a governor in the southern province of Moquegua. Following the laws of karma, Congress impeached him. A few days later, a judge barred him from leaving the nation for 18 months pending investigation of corruption allegations. 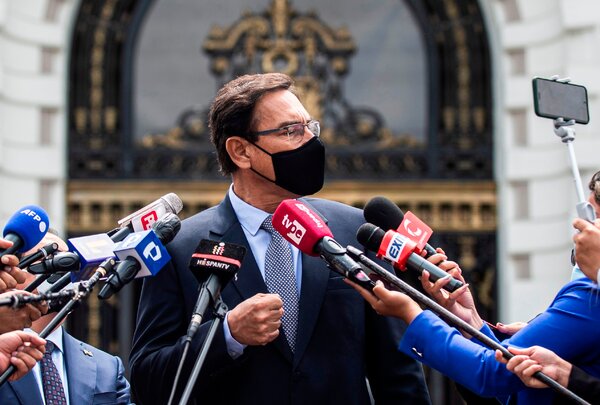 Then Mr. Vizcarra surprised his supporters by announcing that he would run for Congress in the coming elections with a corrupt party whose members had voted in favor of his impeachment. With his unmatched popularity as an anti-corruption crusader, he will surely be elected congressman. And, additionally, if elected he will gain at least a few years of protection from imprisonment, sheltering himself with the same parliamentary privilege he had so adamantly fought against as president.

The war against corruption ended in farce. A disappointment for millions who believed in Mr. Vizcarra; a wake-up call and an embarrassment for his unconditional supporters and the media that enabled a corrupt caudillo to lead the country to an abyss for his personal gain.

There is a lesson to be gleaned from the Vizcarra debacle. Peruvians need strong democratic convictions to avoid being fooled by authoritarian demagogues. Liberal elites and our most respected democratic figures should lead the way. The media, civil society organizations and anti-corruption activists must have humility and integrity to reckon with the ominous damage they have caused with their uncritical endorsement of an opportunistic charlatan who in two years ruined a country arduously struggling on a path of progress and stability.

For nearly two decades Peru’s economy averaged 4.5 percent growth. Under Mr. Vizcarra it fell to 2.3 percent before the pandemic hit, producing an economic decline of 11.5 percent, one of the highest in the region. Poverty rates, steadily reduced over three decades, are rising again. Peru has had for months one of the highest death rates from Covid-19 in the world.

There are deep authoritarian roots ingrained in Peruvian society. Alberto Fujimori became a national hero when he sent tanks to shut down Congress in April 1992. Another former president, Alan Garcia, reached top ratings when the armed forces under his command crushed prison riots in 1986 by killing nearly 300 inmates who were members of the Shining Path guerrilla. A left-wing military coup that seized the media in 1974 was widely endorsed by intellectuals. There is no democratic tradition left or right. Peru needs to build one. There is no room for compromise with democratic values in the name of any legitimate or illegitimate cause.

The 10 days that shook Peru in November are just a dramatic example of the pronounced decay of our political class. No system can hold when its Constitution is used to condone the abuse of power. Institutions are in ruins. The presidency has been belittled and Congress delegitimized. Peruvians are demoralized and fed up with crooked politicians back-stabbing one another in the middle of a deadly pandemic.

That’s why in November thousands of young Peruvians stormed the streets in the largest demonstrations in this century. Unlike in Chile or Guatemala, the protests were largely peaceful. Still, two students died in the ensuing riots and 200 people were injured by police repression. But in six days the protests brought down Manuel Merino, widely perceived as an illegitimate president. Protesters are still out blocking highways in the north, east and south of Lima demanding better living conditions and higher salaries. Five other protesters were killed recently in violent clashes with the police.

Mr. Merino’s replacement, Mr. Sagasti, a highly regarded technocrat, is hoping to hang in long enough to hand over office to the next elected president. Under this backdrop, April 11, when general elections are scheduled, looks distant.

Many Peruvians say that they are not interested in any of the candidates on the ballot in an election that holds no reasonable hope for an improvement in politics. Who can blame them, considering the sharp decline in the quality of the candidates, both for the presidency and Congress? Three presidential candidates have been accused of corruption or murder and 68 of the 130 present-day members of Congress have administrative or criminal charges pending in the courts. It is a sad state of affairs.

On the eve of the bicentennial of Peru’s independence the question about our democratic governance has dampened any cause for celebration. Building the foundations of a democratic republic remains an elusive promise.

Sonia Goldenberg is a journalist and documentary filmmaker.

Declan Lynch: 'Alien territory for a candidate who says what she thinks'